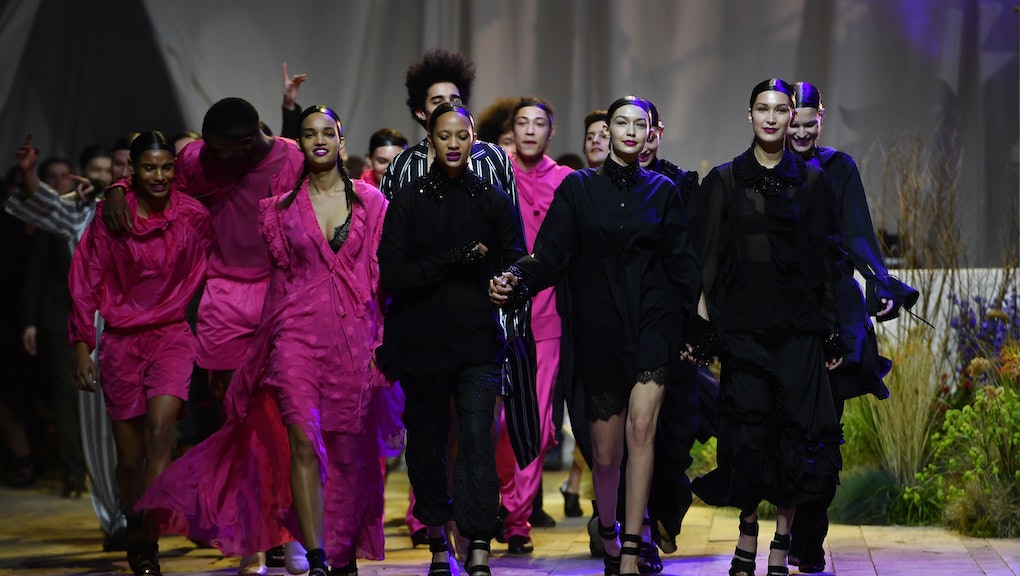 If there’s anything this fashion season has proved, it’s that designers are becoming more and more brave about using their runway to advocate for their political viewpoints, letting their clothes speak volumes.

As fashion is an industry that largely impacts women, it is not only timely, but appropriate, that designers are aligning with the women’s movement. From Balmain to Dior, to brands like Wanda Nylon, DROMe and Soltana, Paris Fashion Week proved that this is the year for women to rise to their power.

Here are the designers that presented collections in support of the women’s empowerment movement this Paris Fashion Week season.

Italian designer Marianna Rosati of DROMe said in an interview that she was intent on creating a collection that “places women at the center of humanity’s transformation."

The words “Future Feminism” and “Love Humans Be Fearless” stood out from the corridor walls leading to her runway.

“For me, this collection was really about the energy of the woman. Because I think that the woman is a very strong, powerful tool for humanity to get the future right. She is the center of this movement,” Rosati said. The collection juxtaposed layered pieces of leathers mixed with delicate silks, representing the layered personality of Rosati’s ideal woman: one who has masculine energy, combined with a soft sensuality.

The designer was also intent on sending a message of love, unity and positivity. Despite news of diversity casting drama this season, Rosati ensured she maintained her approach to work with diverse models. “Diversity is the core of the world, it’s where the most interesting things come from,” Rosati said.

Balmain creative director Olivier Rousteing decked out his glamazons in a “hear me roar” kind of fierce, donning them with crocodile and snakeskin panels that screamed rock n’ roll.

As Rousteing told Women's Wear Daily, “It’s all about a return to the forces of nature. I wanted to create strong Amazons. Women’s power today is extremely important, and I think I reflect that with this collection. It’s very feminist."

The designer’s wild vision of glamour was expressed in leather, velvet, fringe, metallic and prints of wolves — probably to symbolize a roar of rebellion and resistance.

Paris-based Wanda Nylon designer Johanna Senyk has always embraced diversity on her runway, making an effort to show the multicultural beauty of the city. With everything happening in international politics (most especially the upcoming election in France, with a far-right candidate very much present), Senyk is even more intent.

This season, her diverse cast represents the spirit of the powerful woman, accessorized with the beret. Her multicolored collection is built for a woman on a mission and with a purpose, hence the practicality of the pieces, as well as their bold volumes.

Based in both Paris and Tunisia, Fatma Ben Soltane, designer of Soltana, summoned power dressing detailed with handmade golden embroidery, a nod to her Tunisian roots.

With words like “je m’envole” (I fly away) sewn into her velvet tops, Soltane said in an interview that she aspires to create clothes for “strong and passionate women who dare." With a collection featuring blazers and suits, the designer aims for sophistication while making women feel important. “I try to pass messages in my design to promote equality. To encourage women to fight for the things she wants, to do what she wants to do, to be the best she can be, so she can make the world better,” Soltane said.

However, as exciting as these women's empowerment statements are in fashion, it leaves one to wonder how genuine the industry is actually being in championing this cause. After all, brands led by women designers are still the minority.

Now that feminism is being talked about more than ever before, one can't help but suspect if this is a mere marketing tool to appeal to a socially-conscious generation. Either way, if it means reaching more and more people to contribute to the women's movement, (as fashion-loving feminist writer Chimamanda Ngozi Adichie aspires for it to be), then so be it.

Here's to hoping gender equality and women's empowerment stay "in style" for a lifetime.