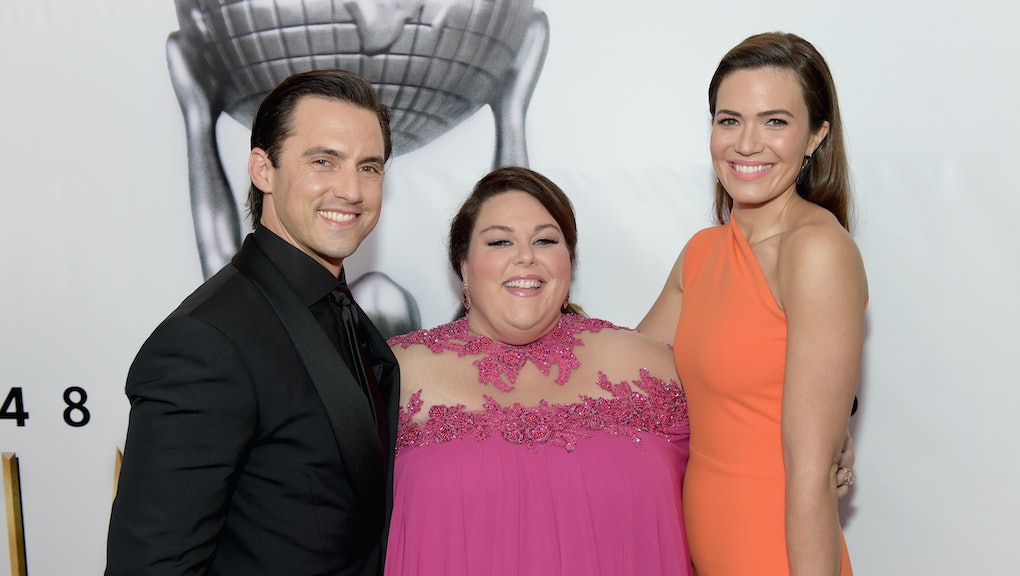 On 'This Is Us,' Kate takes the blame for Jack's death — but why?

In Mic's TV club, senior arts writer Kevin O'Keeffe and arts writer Miles Surrey will watch an episode of a TV show with no regard to how familiar we are with it. The next morning, we'll dissect it in a conversation. This week's show: NBC's This Is Us.

Kevin O'Keeffe: Miles, welcome to the world of This Is Us, where everything is destined to make you cry and the showrunners and cast routinely warn fans they're about to ruin their lives!

I kid because I love, mostly. I binged the first half of This Is Us ahead of its midseason premiere and really enjoyed it. But — and we can dive into this more later — the culture around the show has made it difficult for me to stay invested. I've probably missed three or four episodes. That said, watching this one reminded me what I like about the show, and made me think I could tune out the noise around it.

What did you make of your first sojourn with the Pearson family?

Miles Surrey: So this is This Is Us! I'll be honest, I didn't know much about it going into the episode, aside from the fact it is specifically designed to make people cry and arguably had the worst introduction — featuring a Wikipedia definition! — for a show that's ultimately very good.

I have to say, I was charmed by the Pearson family and all of its members. I really liked Randall and was glad to see he quit his soul-crushing job in the short time spent with him. Kevin's play went well and he talked to Ron Howard, which is an insane cameo. Kate blames herself for her dad's death, for reasons! There's a lot of moving pieces, but I'm actually quite invested for someone who just jumped right in.

We didn't get much from Mandy Moore this week, but she was wearing old-person makeup so she's immediately forgiven.

KO: You are immediately responding to my favorite part of This Is Us: Old-Age Makeup Mandy Moore! I sincerely think she's very good in this show, either past or present, but there's something about how absurd her makeup is and how she makes it work regardless.

She may not have gotten much this episode, but her big scene with Randall — in which she finally apologizes for hiding from Randall his recently deceased biological father, William — is enough for me. The way she fully gives herself over to her guilt, admitting her actions were not only what she thought was best but also selfish, is striking. It takes a lot to act opposite Sterling K. Brown and come out looking great, but Moore achieved it.

In fact, all of Brown's scene partners do solid work this episode. Susan Kelechi Watson, who plays Randall's wife, Beth, is quietly devastating in her eulogy at William's memorial. Having lost my father not long ago, I was really touched by the way This Is Us understood how to tell a story about a dad's death that goes beyond the father-son relationship. Of course one man would touch all kinds of people in different ways. The divergent reactions from the ensemble cast really read as authentic to me.

As you can tell, Miles, I tend to watch this show for the acting. But as we have joked, much of the culture around it is about the crying. Did you get emotional? Or do you have no heart?

MS: Honestly, I'd probably watch the show for the acting as well; NBC really found a terrific ensemble cast. The heartless man I am, I didn't come close to crying at any point in the episode. But that doesn't mean I don't understand where — and how — This Is Us can induce some This Is Tears.

It's a lot of heavy monologues about characters past and present, fathers like Jack and William who both passed away, and the Pearson family's own struggles — such as Kate somehow blaming herself for her father's death and Kevin grappling with choosing a potential Ron Howard movie in Los Angeles or reconciling with his ex-wife in New York.

That said, if I was more invested in the show and the Pearson family instead of jumping in on episode 17, I do think it could've brought me to tears. They all seem like lovely people — even the very flawed, mustachioed Jack.

KO: Yeah, what do you think that Kate thing is about? From context clues and the preview for the next episode, it seems like Jack goes to see Rebecca's show two hours out of town — at Kate's urging — and dies in a car accident along the way. But that seems like kind of a reach.

Of course, the This Is Us marketing department will obsess over this question for days — after all, this is the same team who strung fans along with the question of "Where is Jack?" for months last fall. And herein lies the rub with This Is Us: I want to watch it out of time, without having to be subjected to articles where Moore says the finale will "destroy America." It's all so hyperbolic and obnoxious to me. I'm guessing, having not watched before, that didn't influence your viewing of this episode much?

MS: I do think Kate convinces Jack to drive all the way to Cleveland to see his wife perform and he does so while drunk, dying in an accident along the way. I just don't see another way around it where Kate can still, inexplicably, blame herself.

But this actually ties into your question: I'm not all that familiar with the This Is Us marketing or the way the showrunners talk about it. But I just don't know how manipulative the show might be with its "twists" on what's going to happen to the characters, and whether each and every episode will stab you through the heart — though I have a feeling it happens often!

It didn't really bog down the episode for me, though I'll admit the emotional monologues kind of tired me out by the end credits. To put it another way, I'm glad This Is Us airs on NBC and has to deal with the restrictions of network television. If it had an hour-plus to kill on, say, HBO, it might be overkill.

KO: Agreed. NBC is probably glad it's not on HBO, either, considering it's the big breakout hit of the season. They'll almost certainly be sad to see the first season end, too. My only prediction for that finale: We'll be expected to cry.

MS: If I ever get around to binging the other 16 episodes, I'll bring some tissues.

This Is Us airs its season finale on NBC at 9 p.m. Eastern on Tuesday.