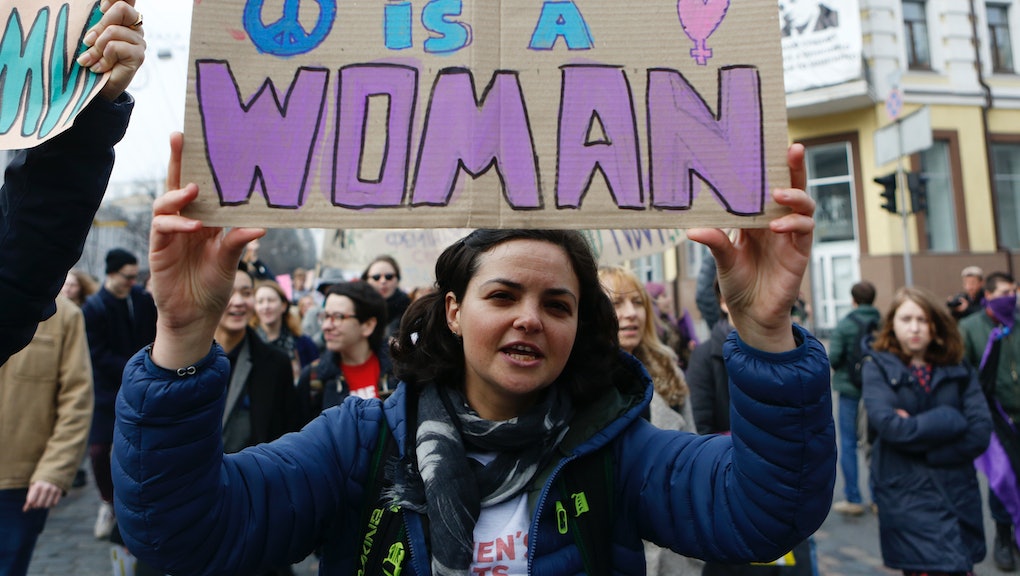 Women's Strike NYC March Route: Here's the significance of the stops along the way

In honor of International Women's Day and A Day Without a Woman, women in New York City will be taking to the streets to march for their rights.

As part of a wave of marches and rallies taking place across the country, the International Women's Strike NYC Rally and March will bring New Yorkers together in support of women's rights and other humanitarian causes, including, the organizers note, "labor campaigns, migrants' rights, Sanctuary Campus campaigns and others."

Following a rally at 4:00 p.m. Eastern time at Washington Square Park, the protestors will march to Zuccotti Park in the Financial District, which is best known as the home of the Occupy Wall Street protests. The march begins at 5:30 p.m. and is expected to run until approximately 8:00 p.m., according to the Facebook event page.

Along the way, the march will feature performances at a number of stops holding a special significance in the fight for human rights, including women's rights, LGBT rights, immigrants' and workers' rights.

Here are the key stops the march will be making, as noted on its Facebook event page, and their significance.

The corner of Washington Place and Greene Street holds a special significance in the fight for workers' rights. Now home to New York University's Brown Building of Science, the building's top three floors were once home to the Triangle Shirtwaist Factory. The factory's poor working conditions — including inadequate ventilation, locked doors and no fire safety procedures — had dire consequences when a fire broke out on March 25, 1911, resulting in the deadliest workplace accident in New York's history. In all, 146 died as a result of the fire. All but 17 of those killed were women, and almost half were just teenagers.

The tragedy, along with the public outcry that ensued, was a catalyst for change. New York state adopted the most comprehensive workplace laws in the country within three years of the fire, passing 36 laws regulating workplace safety and fire conditions, according to PBS.

The Stonewall Inn is best known as the home of the 1969 rebellion that sparked the LGBT rights movement. In 2016, former President Barack Obama established the Stonewall National Monument, including the historic bar and Christopher Park across the street. In his statement establishing the monument, Obama noted that the 1969 Uprising was "a watershed moment for LGBT civil rights and a transformative event in the nation's civil rights movement on par with the 1848 Women's Rights Convention at Seneca Falls and the 1965 Selma-to-Montgomery March for voting rights in its role in energizing a broader community to demand equal rights."

As President Donald Trump's administration continues to ramp up its efforts to capture and deport undocumented immigrants, the march will make a stop at one of the places where NYC's immigrant population is fighting to stay in the U.S.

The Varick Street location is home to a federal immigration court, along with a "service processing center," where immigrants are detained while being processed before being transferred to another detention facility in New York or New Jersey.

Along with stopping at symbolic places in the fight for human rights, the women's march will also take an opportunity to protest the man who controls the immediate fate of these essential struggles: President Donald Trump.

Trump Soho, a luxury Trump hotel located on the corner of Varick and Spring Streets, is one of several Trump properties in New York City. The hotel is owned by the CIM Group, which took control of the hotel after foreclosing on the original developers in 2010, but continues to be operated and managed by Trump's family business. The president made a campaign speech at the hotel last June.

Though the hotel opened in just 2010, it has had a long and controversial history, including a connection to Russian immigrant Felix Sater, who has a criminal background and ties to the Russian mob, and a criminal investigation over alleged fraud.

The march will also pay tribute to the country's fraught racial history with a stop at the African Burial Ground. The site, which is now a National Monument, is the final resting place of both enslaved and free Africans from the 17th and 18th centuries, operating as a cemetery from the 1690s through 1794. The former cemetery, which had remained undiscovered for centuries, was only unearthed in 1991 during construction on a federal office building.

The march's Facebook event page also notes there will be a stop at 75 Wall Street, a current condominium building that was once the site of an open-air slave market. The Meal Market, as it was known, was the second busiest slave market in the country, Untapped Cities notes, second only to the market in Charleston, South Carolina. A small plaque to mark the site of the market was unveiled on the site in 2015.