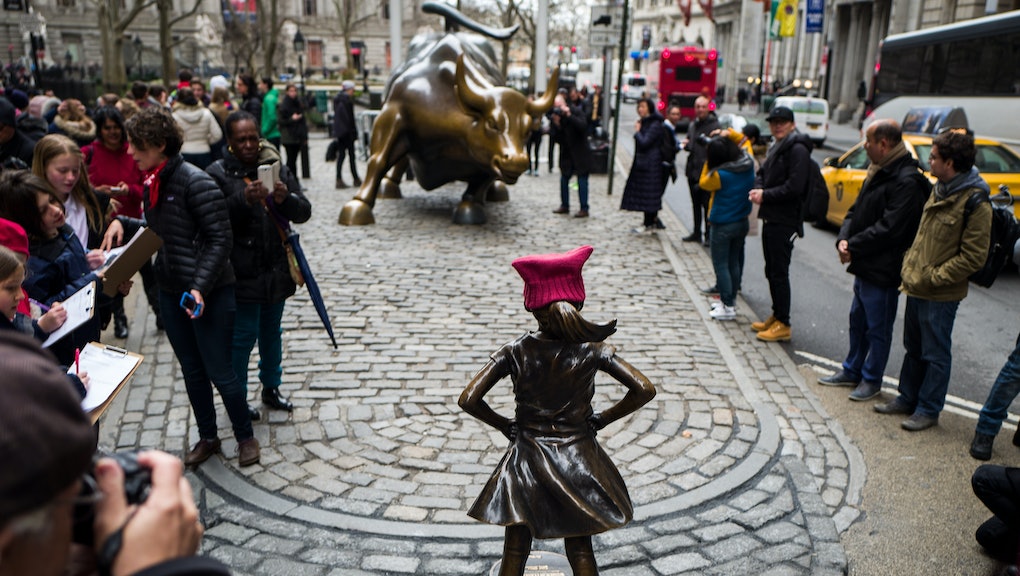 When I first laid eyes on the photo of a statue of a fearless young girl, hands on her hips, chest out, staring down Wall Street's charging bull, my first thought was: "Oh, hell yes."

The statue was installed by State Street Global Advisors, an investment company with nearly $2.5 trillion in assets, as a call to action for the more than 3,500 companies it invests in (collectively worth $30 trillion) to add more women to their boards. After all, strong female leadership is good for a company's bottom line.

"A key contributor to effective independent board leadership is diversity of thought, which requires directors with different skills, backgrounds and expertise," Ron O'Hanley, president and chief executive officer of SSGA, said in a statement. "Today, we are calling on companies to take concrete steps to increase gender diversity on their boards and have issued clear guidance to help them begin to take action."

In the statement, SSGA noted that it issued guidelines on Wednesday that will lead to more gender-diverse boards. If a company does not work toward adding more women to its board, SSGA said that it will use "proxy voting power to influence change" by "voting against the chair of the board's nominating and/or governance committee if necessary."

A girl standing defiantly against a beast 10 times her size is a powerful image, and a relevant one on International Women's Day, when women around the world are taking to the streets to fight for gender equality, reproductive rights, pay equity, rights in the workplace, equal access to education and government accountability for helping victims of domestic and sexual violence.

What happens to the statue?

A spokesperson for SSGA said they have a permit to keep the statue in place for a week but are in talks with the city to extend it to a month.

"From there, it's up to New York!" the spokesperson added. "We would be absolutely supportive of her being a permanent installation." (Mic reached out to the city for comment and will update if given a response.)

The real issue at hand

Symbolism is powerful — but what's more powerful is change. Artist Arturo di Modica created the Charging Bull statue as an emblematic cure to the Wall Street crash in the '80s, "as a way to celebrate the can-do spirit of America and especially New York, where people from all other the world could come regardless of their origin or circumstances, and through determination and hard work overcome every obstacle to become successful."

But for many, the bull has since come to symbolize wealth and prosperity, not inclusion. Tourists aren't staring down its horns to imagine a future free of discrimination — they're taking pictures of themselves rubbing its bronze balls for good luck.

It's also important to acknowledge that this is a fantastic press stunt for SSGA, one that we shouldn't praise without a little research. SSGA itself has yet to achieve gender parity on its board, a point not acknowledged in its statement. The company's 11-person board has only three women. That's a rate of 27%, or just one percentage point above the average of women making up boards of directors in the banking industry. (SSGA has not yet commented on the makeup of its board.)

The statue is inspiring; the call to action is vital. But I'm wary of a company pointing fingers at others without taking a look in the mirror. I don't just want to yell "Hell yes!" at a statue — I want to revel in gender-equal leadership.