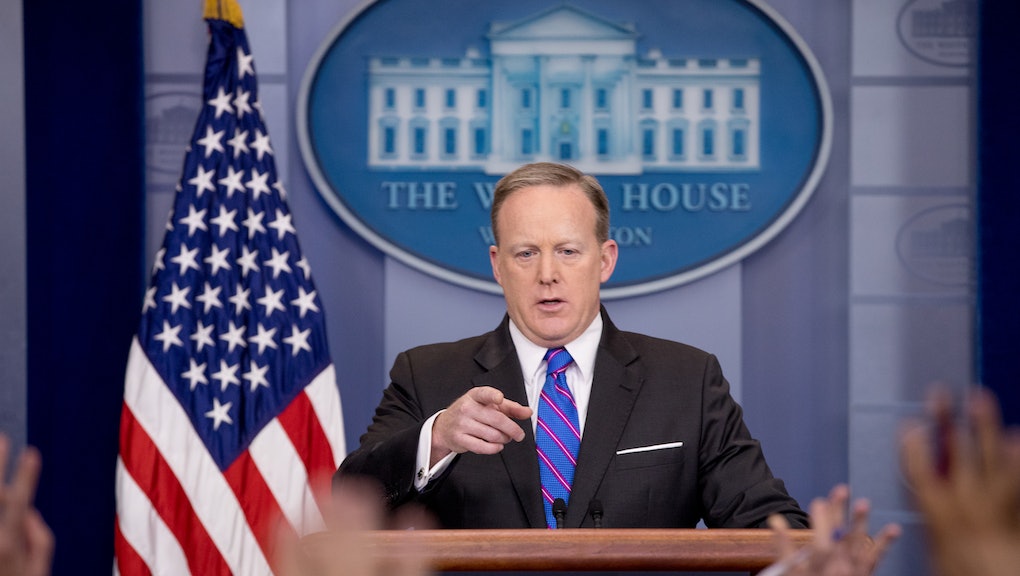 White House press secretary Sean Spicer, at his daily press briefing on Wednesday, attempted to make the case for House Republicans' health care plan — which, if passed, would get rid of the individual mandate that penalizes Americans age 27 and older who do not purchase health insurance.

In doing so, however, Spicer made exactly the case for why the individual mandate is necessary to keeping health care costs down. The mandate required everyone to have insurance — even healthy people, whose premiums then subsidized more costly sick patients — in order to keep the American healthcare system afloat.

During his briefing, Spicer argued that 27- and 28-year-olds just getting off their parents health care plans have "no desire to go get health care" because they are healthy and would rather spend money "on something else."

That's the precise reason the Affordable Care Act — better known as Obamacare — created the mandate in the first place.

Young, healthy people are needed in the health care pool to drive costs down for everybody, especially if the government is going to require insurance companies to cover everyone, as well as provide services such as preventative measures, substance abuse treatment and maternity care.

The CATO Institute — a libertarian think tank — described why an individual mandate was necessary if the government was going to force insurance companies to cover everyone, including sick people with pre-existing conditions. Here's the crux of their argument, from a 2013 article:

As healthy people leave the rolls, the per-unit cost of insuring the remaining (riskier) insured rises, which pushes premiums up, which in turn drives more healthy people off the rolls. In the end, the only people who enroll are those with known medical conditions, such that premiums approach the actual cost of health care, and the insurance industry collapses.

As the CATO Institute piece said, if young people only purchased care once they got sick and needed expensive care, costs would rise for everyone.

Spicer's idea that young, healthy people would buy coverage if it were cheaper, or didn't cover things like "end of life" care, doesn't even align with the House GOP's plan that they introduced Monday.

While the GOP's plan does not have an individual mandate, it does penalize people who let their health care coverage lapse for 63 days.

People who let their coverage expire for 63 days will be hit with a 30% surcharge on top of the monthly premium rate. That money would go directly to the insurance companies in order to try and make up for the lost revenue from healthy people who don't feel obligated to spend money on insurance until they get sick. In other words, it's an admission by Republicans that people need incentives in order to buy care.

Experts say the GOP's plan would actually discourage healthy people who hadn't previously been covered to decide to buy health insurance, because they'd get hit with that hefty surcharge for deciding to get covered.

In the end, Spicer's defense of the GOP's plan ended up making the exact opposite case he was hoping to make: That the individual mandate is necessary to keep the health insurance industry afloat.