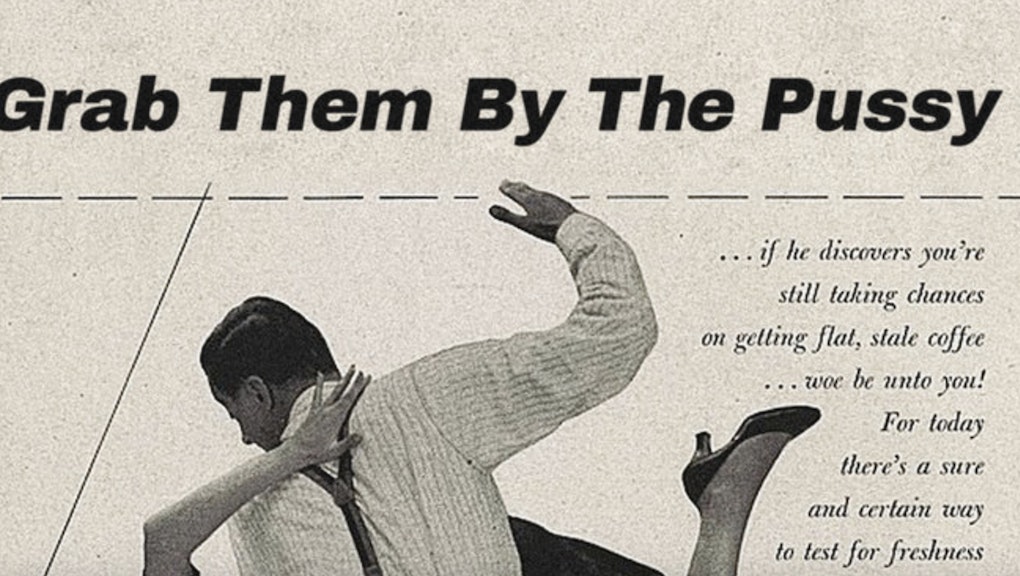 President Donald Trump has many famous quotes, but nothing can top the infamous "grab them by the pussy" line.

Saint Hoax, an anonymous artist who splits his time between Beirut and New York City, couldn't stomach those words or any of Trump's numerous sexist remarks about women. So on International Women's Day, Saint Hoax released a project replacing the slogans on misogynistic ads from the 1950s and replaced them with real statements Trump made about women over the years.

For International Women's Day in 2016, the artist created a viral photo campaign of young female Syrian refugees posing as their favorite Disney princess. Recently, however, he was working on a project on sexist ads from the 1950s and couldn't help but compare them to previous Trump statements, Saint Hoax told Mic in an email.

"As I was researching those ads, I couldn't stop comparing them to Trump's sexist remarks about women," Saint Hoax said. "So I decided to match the visuals with sexist Trump quotes, just for fun, and show them to my friends without actually telling them where I got the quotes from. I told them that these were the actual advertisements that were published in the '50s/'60s and they believed it."

Saint Hoax said his friends were shocked when they learned the quotes were actually from Trump.

While it's true the way women are represented in media has shifted drastically since the time the original ads were published, Saint Hoax said he believes Trump is sending the United States back to the Mad Men era, when women were often seen as objects. He said he hopes his posters show how Trump's remarks are seriously archaic and worrisome.

"Sadly, Donald Trump is trying to take America back to the 'Mad Men' era," Saint Hoax said. "I'm hoping that these posters would make people realize that Trump's 'locker room talk' is extremely dangerous especially now since he is the president of the United States and he's 'supposed' to be representing one of the most feminist countries in the world."

When Mic asked Saint Hoax for the impetus behind his annual International Women's Day projects, he said:

I identify as a man, and that is exactly why I make it a point every year to celebrate International Women's Day by publishing a project inspired by the event. Everyone should be celebrating women today and every day.

Check out the rest of Saint Hoax's work below: