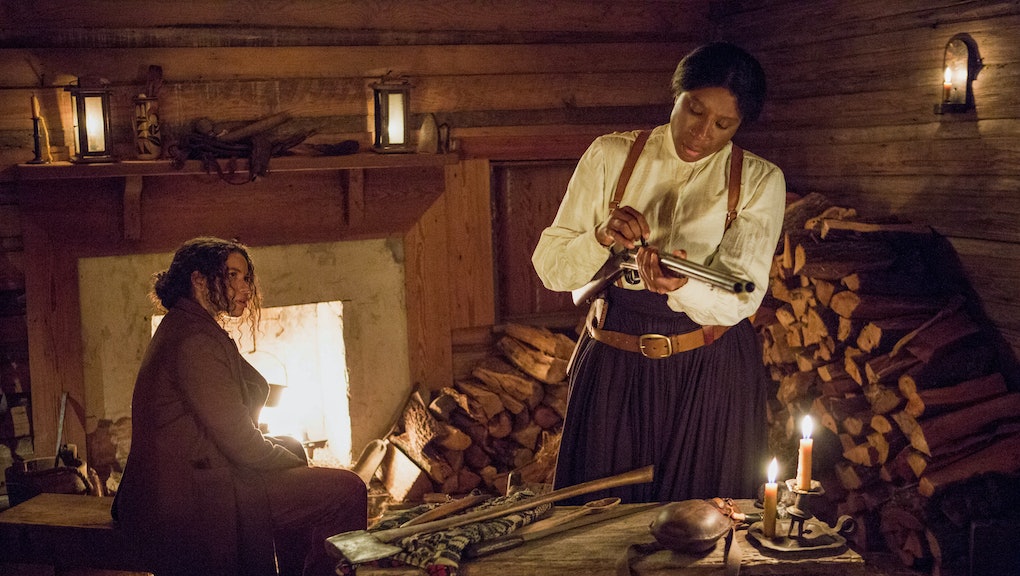 With a gun-toting Harriet Tubman, 'Underground' is the perfect ode to revolutionary women

Underground, the television drama about runaway slaves on a quest for freedom in 1857, wasted no time in showing audiences that their preconceived notions about Harriet Tubman were all wrong.

For years, on-screen portrayals of the civil rights hero have been relegated to educational cartoons for kids and sanitized TV movies that portray her as "juvenile and one-dimensional," writes Kate Clifford Lawson, the author of Bound for the Promised Land: Harriet Tubman — Portrait of an American Hero, at Entertainment Weekly. Think Cicely Tyson's 1978 portrayal of the famed abolitionist in A Woman Called Moses, where Tubman spends half her time on screen in tears, praying for strength as she shuffles behind white abolitionists.

But Underground, which debuted its second season on WGN America Wednesday night, turns that portrayal of female revolutionaries like Tubman upside down.

Within the first five minutes of the second season's first episode, we meet Tubman — the gun-toting, axe-wielding, slick-talking abolitionist that actress Aisha Hinds and creators of Underground have brought to life. Tubman confronts two slave catchers as she and runaway slave Rosalee (Jurnee Smollett-Bell) try to help another slave to freedom.

"I ain't scared of no nigger bitches," one of the slave catchers responds.

"And ain't nobody scared of you," Tubman quips.

It's a sharp departure from the culture's portrayals of America's most famous civil rights heroes, which tend to downplay their radicalism to make them palatable for a broad audience. This is why the culture remembers Rosa Parks as a meek woman who sat on a bus instead of Claudette Colvin, who was a 15-year-old revolutionary (and pregnant) when the NAACP decided not to use her case to challenge segregation laws. It's why we celebrate Martin Luther King Jr.'s peaceful resistance instead of Malcolm X's "by any means necessary" approach. These uncomplicated narratives mythologize civil-rights heroes while stripping them of the abrasiveness that drove them to buck the culture in the first place.

It's easy to forget that resistance is often radical, ugly and perhaps, un-American in the eyes of those who seek to maintain the status quo. It's a point that's especially resonant today, as many citizens have become soldiers in the fight for equality and against discrimination. It's why Underground showrunner Misha Green says the hourlong drama is especially important today. The characters are "up against even crazier things than we are. And they fought back, they created change, and they moved the world to a better place," she tells Bustle. "If we all work together, we can do good."

Other women in Underground find the nerve to cast their fears aside, too. Rosalee is now a valiant soldier of the abolitionist movement, a stark change from her persona in season one, where fear stood between her and freedom for far too long. Now, for Rosalee to be truly free means that she and her loved ones all taste freedom. She decides, against Tubman's advice, to travel 600 miles to Ohio to steal away her lover Noah (Aldis Hodge), who is set to be hanged for murdering a man during their escape from plantation in Macon, Georgia.

With the help of John and Elizabeth Hawkes (Marc Blucas and Jessica De Gouw), a married abolitionist duo, Rosalee stages a diversion to help Noah, and ultimately two other enslaved men, try to escape to freedom. While she is successful in saving their lives for the moment — she set up chemical reactions to go off like bombs in the town square as they stood with nooses around their necks — Noah and the other men were ultimately recaptured.

Meanwhile, Elizabeth, a Macon socialite turned abolitionist, embraces an anti-slavery collective. She becomes another gun-toting revolutionary after she meets with the "sewing circle," a handful of women with more than needles up their sleeves. The group, which includes white women and free black women, has secret meetings for target practice at a makeshift gun range, showing that groups of women were organizing in radical ways and not sitting idly beside men.

Perhaps it's poetic that the season opener premiered on International Women's Day, as several groups across this nation decided to strike against President Donald Trump's agenda and stand up for women's rights. That Tubman, as a black woman, stood fearless in the face of oppression parallels the resistance movement in today's America. Antebellum coalitions, like abolitionists who made up the Underground Railroad and all-female anti-slavery groups, were the blueprint for diverse organizations who are fighting against anti-woman, anti-black, anti-Muslim, anti-immigrant, anti-gay and other discriminatory practices today.

"We're living in a time right now where we could use a kind of faith, a kind of power, the kind of resistance, the kind of revolution that was embedded inside Harriet," Hinds told Entertainment Tonight.

Wth Underground, audiences can finally witness Tubman's relentless power and unyielding faith, as well as the determination of female freedom fighters like her. If the revolution is to be televised, then there's nothing better than witnessing fierce women make it happen.