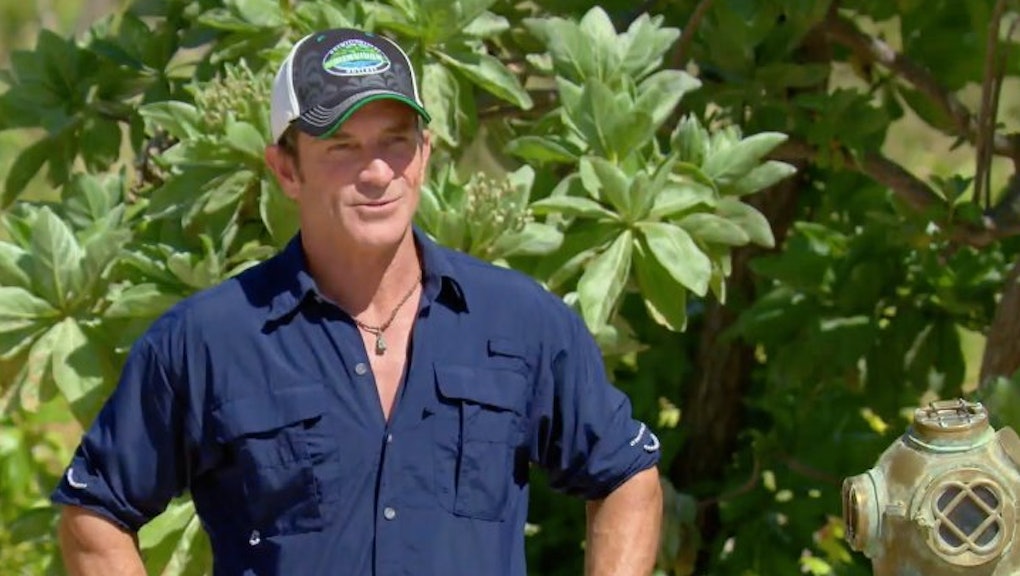 Survivor: Game Changers recap: Setting the stage... or the shipwreck

There is something downright magical about the voice of Jeff Probst as he introduces a new season of Survivor. Seeing 17 years of Survivor logos flash across the screen — this was the 500th episode, after all — sent a chill down my spine. I was 8 years old when Survivor started airing, 14 when I became addicted to it and 24 when I got to play as a contestant myself. There's no doubt that this is the greatest reality competition show on TV. We're back in Fiji. And it's season 34: Game Changers.

A returning-player season is very different from a newbie season. There's a history with each of the players that has to be folded into the storytelling. Regret, revenge and victory are on the minds of each player. With a newbie season, there is a wide-eyed sense of wonder in those first few moments. In a returning season, there's baggage.

I remember walking up to the beach to meet Probst on Millennials vs. Gen X. To us, Probst was the dream. I'm sure to these contestants, especially the ones who ended their Survivor journey with torch and aspirations snuffed, Probst narrates their nightmares.

We are treated to a montage of introductions from some of the big-reputation players: New Jersey policeman Tony Vlachos, who played boldly and won season 28; Survivor vet Malcolm Freberg, who is as charming as ever and knows it; Sandra Diaz-Twine, the only two-time winner and queen of Survivor, and many more. It's the who's-who of the Survivor community — a fan's dream, as Zeke Smith, my former castmate, points out.

Cirie Fields and James "J.T." Thomas (also a winner) have a bit of a back-and-forth on the boat. What could be confused as simple banter reveals a truth about the season. People are playing with folks they've spent time with — and been hurt by — in the game before. Everyone has past beef, feelings they'll need to work through to survive.

The episode starts with Probst standing atop a wrecked ship, which made me scared for the handsome host. He doesn't fall, though — he nails his intro, and the season begins.

The 20 castaways are in two tribes: Mana and Nuku, and they begin with a grab for supplies and a jump off a ship — about as Survivor as you can get.

I'm splitting the drama into tribes. First up, Mana tribe.

I love a premiere episode because we get the beginning of each player's journey. On my season, I had what we call a "growth narrative." This meant episode one mostly consisted of me standing alone, holding leaves. I had to grow from somewhere. The Mana tribe's beginning feels more like an episode of Game of Thrones and less like Survivor. There's a lot of talk of crowns, titles and glory.

Tony is running around and giggling, looking for idols and digging a spy bunker, a variation on his now-famous #SpyShack from season 28. As it turns out, Tony ends up digging himself into a hole — literally. Tony isn't the only one coming in hot on the Mana beach. Sandra is the queen and isn't backing away from that title. The biggest threats of the game, who ought to be sticking together and protecting one another from the rest, spend most of their time throwing shade instead.

The other side of the coin is that the more low-key players can sit back as the big threats eat one another up. Hali Ford proclaims herself a cobra, ready to strike before you realize it's happened. Malcolm stresses the importance of relationships. Aubry Bracco is the calm, poised and confident version of herself she grew into last season. Most people on the tribe feel like spectators of a growing madness.

Nuku beach is home to many goats — literal goats. Zeke introduces his tribe, seemingly eager to simultaneously fanboy and murder everyone. Everyone hugs in the sort of jovial, we're-playing-Survivor-and-I-don't-hate-you-yet way. I would like to point out that as Andrea hugged Zeke, she said: "Nice to meet you." This is a lie. Andrea and Zeke played together in the famous Survivor: Brooklyn, a one-day Survivor event that takes place in New York.

The main drama of the Nuku beach focuses on Survivor legends Ozzy Lusth and Cirie. I find it fascinating: Ozzy and Cirie played together eight years ago. EIGHT YEARS AGO! For those needing a refresher: Eight years ago, Cirie was part of a dominant all women's alliance that blindsided Ozzy. And Ozzy still has feelings about it. This old wound between Ozzy and Cirie becomes the center of the Nuku drama.

I completely understand why this past Survivor scar is still bleeding so many years later. You don't just experience the hurt. You go through the betrayal, then you watch it on national television and then you re-live it for years both on the internet and in island dreams.

There are other things to notice on Nuku. Sierra Dawn Thomas finds an advantage, the legacy advantage, and she proclaims she's ready to make big moves. The legacy advantage is immunity at either 13 or six. It can also be gifted to a different player if Sierra gets voted out. Ah, our evolved game!

Sarah Lacina wants to be a silent killer. Sarah's confessional reminded me of Hali's on Mana. Both women are ready to kill and kill silently — as opposed to some of the louder voices we are hearing from. I also found Brad Culpepper's confessional about wife Monica (also a former contestant) kind of sweet. He wants to play and think like his strategic, underestimated wife. Love is cute and I am still single. Moving on!

Ah, a classic Survivor challenge that includes swimming and locks and puzzles. I'm a little jealous. As a certified scuba diver, I was pumped to swim on my season, but there wasn't a ton of it. This challenge is a battle to the finish. As Jeff Varner struggles and swears trying to open the keys, Zeke and Cirie get a lead on the puzzle. Ciera Eastin, who tragically has done and lost this puzzle before, loses the puzzle again. And Nuku wins immunity.

A new twist is also explained. It has to do with how tie votes are handled. Here is Jeff Probst breaking down the new protocol. Specifics aside, the new twist raises the stakes for players who want to consider splitting or tying a vote. It's unclear yet if someone will use this new evolution strategically.

The first vote basically boils down to who is willing to throw the first stone. Ciera, who is a threat for being strategic and under-the-radar, puts a name on the block. This starts a domino effect, and her name ends up on everyone's lips.

Survivor is a tricky balance. You want control over the way a vote moves, but you don't want to initially be credited as spearheading the vote, especially early on in the game. Ciera is a slick, sly player who, of course, is famous for voting out her mom. Plus she is not necessarily an asset physically in early challenges. I think her name would be passed around early in any scenario.

The other name that ends up on the block is Michaela. Oh, Michaela. I love Michaela, having played with her on my season. She's funny, strong and speaks her mind. With that said, on Survivor season 33, Michaela also found her name being thrown around early in the game. Michaela said it herself: She doesn't always hold back how she feels. Nobody likes to be the fake vote, and it's understandable that Michaela is disappointed. Unfortunately, her lack of a poker face makes her go from the fake vote to the name on the block.

Ciera ends up with her torch snuffed with a near-unanimous vote. Ciera leaves with grace and a smile. I'm a fan.

Big threats begin to align to protect one another. Tony has a massive target on his back because of his reputation and his running around. Sandra is a two-time winner. Aubry came close to winning her last season. Malcolm is so, so handsome. (He agrees.) Chills ran down my spine when Sandra says she and Tony could "do damage" together. But the dream alliance doesn't last long.

Paranoia is rampant on the beaches of Mana. I get it. In the first few days of the game, everyone's trying to figure out who they can actually trust. I didn't feel confident until after the first vote, because the voting booth is the only truth teller. Paranoia can ruin an alliance. And just a few days in, paranoia seems to quickly destroy the "Big Threats" alliance. Shame.

Nuku Tribe: Cirie is a goddess

I love watching Cirie play Survivor. Zeke voices this perfectly: "Cirie is a masterful player. She has this mystical quality that draws you in."

Cirie faces a problem: She is a threat and everyone knows it. We are shown many Cirie conversations. In each one, the person Cirie is speaking to confesses that they want her out on some level. Sarah is willing to break her word this season and take her out; Zeke doesn't want to align with such a dangerous player early on; Debbie Wanner isn't buying what Cirie is selling.

Reputation can threaten a Survivor game before it has even begun — and Cirie is in trouble.

Damn, that snake looked heavy. I have to laugh a bit at Probst's commentary. I remember competing in a challenge when Probst shouted, "Millennials, do they ever look up from their computer screens?" Poor Jeff Varner, struggling, gets treated to, "Jeff Varner, useless in this challenge!"

I will say, that was some (almost) epic come-from-behind ring tossing from Malcolm. Malcolm's good at ring tossing. He would agree.

This vote involves many moving pieces: physical bros wanting to protect each other, the possibility of an idol. It ultimately boils down to a fight between two strong, opinionated Survivor legends.

Sandra is the queen. Tony is the king. They face off. There is talk of thrones and crowns, and again I feel like we're watching Game of Thrones.

This is a different Sandra in season 34, despite what she says. She's still 100% herself but with the confidence of a now-two-time winner. Sandra is playing a much more aggressive strategic game. It's less "Anyone but me," and more, "This is my target — let's move, people."

Out of the madness, Tony is sent home. Tony and Sandra trade jabs as he leaves. Big personalities, big blindsides. Sandra is so brilliant that she gets Aubry to vote with her while using Aubry as the backup vote. Queen.

Next time on Survivor

A tribe swap already! And they try to kill a goat? I can't wait.