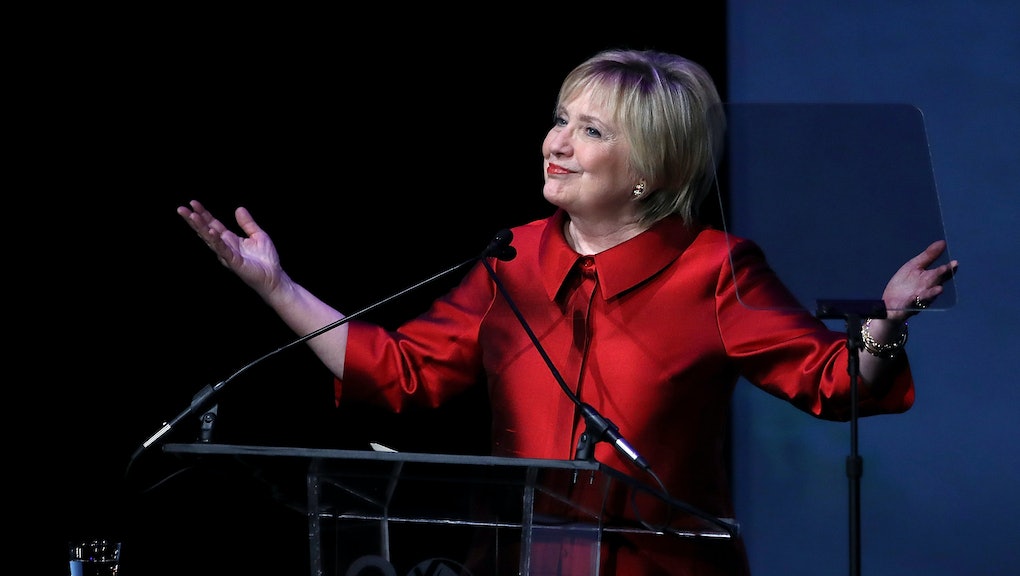 For International Women's Day, Hillary Clinton, like many women across the world, could have taken the day off. It was A Day Without a Woman, after all, and if anyone on Earth deserves a little relaxation, it's her.

The former secretary of state could have easily just holed up in her Chappaqua home and watched the Great British Bake Off while her husband gave her a foot massage, and been like, "I am woman. Hear me roar."

But Hillary Clinton did not do that. No, Hillary Clinton took IWD as a day to inspire. And by "inspire" we mean debut a brand new haircut and unabashedly, proudly wear red, the sign on Wednesday that you were in support of women worldwide.

Of course, since debuting the new look in a quick Snapchat on Wednesday, the haircut has sent the internet into a straight-up tizzy.

It's so short! So modern! She got bangs!

And to think she decided to debut the new look while also giving an empowering message to her followers.

"There’s a lot to fight for: Planned Parenthood, education, healthcare, jobs," Clinton said in the short video, according to the Hill. "Every issue is a woman’s issue. So stand up, resist, run for office, be a champion."

But of course, back to the hair: Claire Underwood, who?

Then later that night, at the Vital Voices Global Leadership Awards, Clinton and her new hair made a more formal debut, with Clinton making a speech in a sharp red jacket, naturally, with her hair a bit more coiffed.

Clinton even seemed jazzed about wearing bright red before IWD struck, wearing a bright red suit on Tuesday at a luncheon in New York City celebrating women too.

Much like only the best politicians, she clearly knows not only how to make a statement with her clothing — but send a message too.