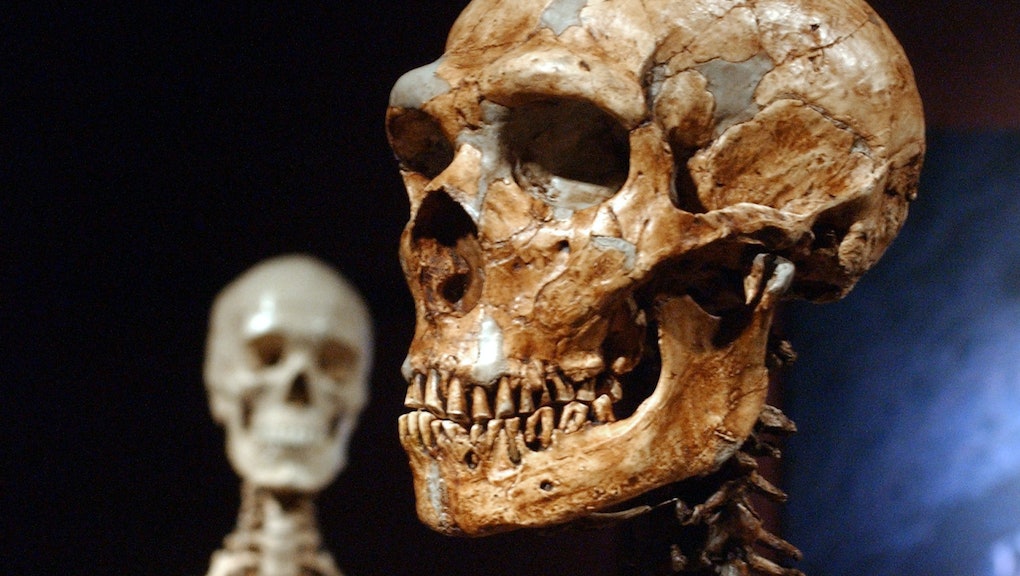 Some of our paleo ancestors ate 100% vegetarian, new study finds

Our earliest ancestors didn't have the luxury of toothbrushes. That's a boon for scientists studying Neanderthals, because dental plaque can provide unique insights into what early humans were chomping on.

A recent study published in the journal Nature revealed there was no single standard diet among Neanderthals, after whom paleo diet subscribers attempt to model their meat-heavy diets. Scientists sequenced the DNA from dental plaque found on five Neanderthal skulls, the Atlantic reported, explaining that skulls found in Belgium had plaque indicating a more meat-centric diet, while skulls found in Spain had plaque indicating "entirely vegetarian" diets.

The research team found no evidence of meat in the diet of the Neanderthals from Spain. Their analysis revealed traces of edible mushrooms, pine nuts, forest moss and poplar bark — a tree that contains the "natural pain-killer salicylic acid," researchers noted in the study. Previous research also provides evidence at least one Neanderthal in that area might have been "self-medicating" with their diet, researchers wrote.

Meanwhile, the skulls from Belgium indicated the Neanderthals in that region dined on meatier fare. Researchers found traces of edible mushrooms, wooly rhinoceros and wild sheep.

"We need to revamp the view of Neanderthals as these meat-eating, club-toting cavemen," Laura Weyrich, a postdoctoral research associate at the University of Adelaide, told the Atlantic. "They had a very good understanding of what foods were available to them."

Eating foods available to them? Sounds a bit like being a locavore, eh?

"When people talk about the paleo diet, that's not paleo, that's just non-carb," Weyrich told the Atlantic. "The true paleo diet is eating whatever's out there in the environment."

Modern day paleo diet enthusiasts subscribe to the belief that our ancestors had a healthy diet that included lots of meats. But it wasn't all wild boar and sheep — shockingly, early humans apparently ate one another. A study published in July found that skeleton remains revealed bones had been cut such that scientists concluded early humans might have practiced cannibalism, Mic previously reported.