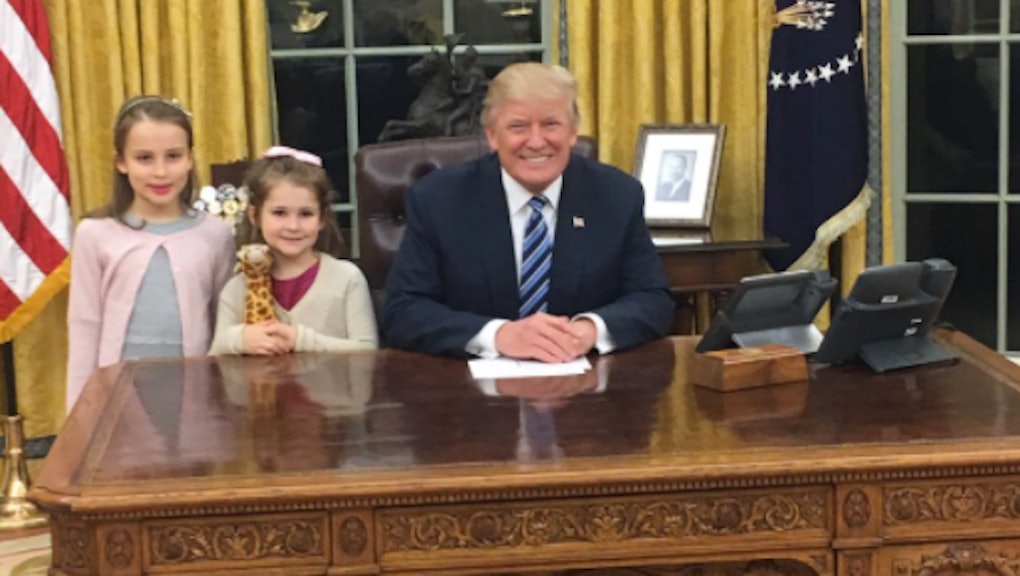 Sen. Ted Cruz (R-Tex.) marked International Women's Day by taking his wife, Heidi, and daughters, Catherine and Caroline, to dinner with a man who once called Heidi ugly.

"Our family had dinner [with] the president & first lady, who were warm & gracious," Cruz tweeted Thursday morning, sharing a photo of his daughters with President Donald Trump.

Cruz and Trump have a tense history when it comes to the women in their families.

In March 2016, then-presidential candidate Trump tweeted an unflattering photo of Heidi Cruz next to a seemingly-airbrushed image of his wife, Melania Trump.

"The images are worth a thousand words," the caption read.

Cruz, who was running against Trump at the time, responded on Twitter that "real men don't attack women." He later referred to Trump as a "sniveling coward" and told him to "leave Heidi the hell alone."

After losing decisively to Trump in the Republican primaries, Cruz's streak of humiliations continued when he was filmed phone banking for the president before the general election.

The video seemed emblematic of the ideological inconsistency demonstrated by Republicans who claimed to oppose Trump on principle, but supported him once it looked like he was going to win.

Trump's record with women remains rocky to this day. On Wednesday, women across the United States left work and marched in opposition to the president, whose attacks on women's health care have been nearly as barbed as his well-documented misogyny.

The marches Wednesday echoed larger women-led protests that took place Jan. 21, the day after Trump's inauguration. Through his conduct, Ted Cruz has made it clear which side of this dispute he stands on.