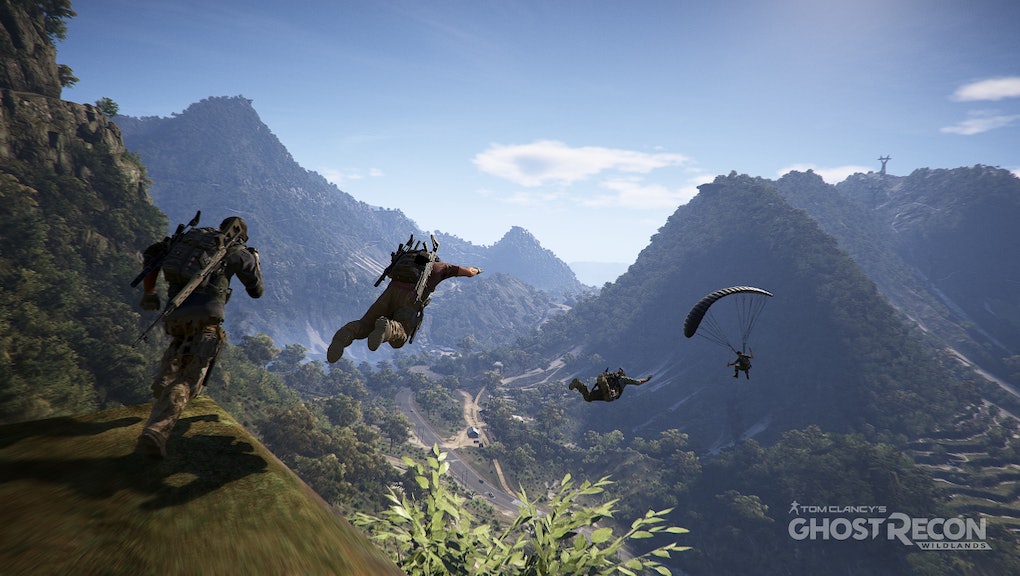 If you took Grand Theft Auto V and Far Cry, and combined them with the gadget-heavy, squad-based combat that defines most of the Tom Clancy's franchises, you'd come up with Ghost Recon Wildlands.

In Wildlands, you play as one of four ghost agents deployed to Bolivia to dismantle a drug cartel run by a warlord named El Sueño. To get to him you'll take down his underbosses spread across the country, these being the objectives of the main story missions.

If you don't use stealth and reconnaissance to plan smart, coordinated assaults or figure out how to achieve objectives without being seen, you'll never get to El Sueño — unless you play the game on easy mode. Enemies in Ghost Recon Wildlands aggressively charge and flank your positions, and it doesn't take many bullets to put you down.

If and when you have to break stealth you need to do so with brutal force and fall back smartly before the professional Bolivian military Unidad forces, in the pay of the cartel, show up. Unidad are like the police in Grand Theft Auto. They'll keep coming at you, if you keep killing them. In the end, you always need to run. To make matters worse, if you kill too many civilians you automatically fail and lose all progress on that mission. You have to be precise in Ghost Recon Wildlands.

Ghost Recon Wildlands review: A massive map with tons to do

It takes me about three-and-a-half minutes to fly a helicopter diagonally across the expansive map in GTA V. It took around nine minutes to do the same in Ghost Recon Wildlands — give or take a minute for dodging surface-to-air missiles and Unidad gunships.

This huge map contains snow-capped mountains, dense jungles, dozens of towns that make for brutal close-quarters combat and rocky terrain that will make even the most seasoned off-road driver wince. Roads are winding and dangerous. So you'll probably wind up dumping ground vehicles for helicopters whenever possible.

You're likely to appreciate the size of the map for all the reasons you're given to explore. If you want new weapons or weapon attachments, you have to loot them from cases spread across Bolivia. You unlock skill points as you level up and gain experience, but you can also pick up bonus skill points in the form of items to collect. In addition to skill points, you also need to collect resources like fuel and food to unlock new abilities, which means searching areas carefully and tagging the supplies for Bolivian rebels fighting the cartel and Unidad.

You can kidnap and interrogate cartel members, hack computers, and gain information from rebel informants to reveal all of this content on the map. Side missions allow you to earn the rebels' loyalty, after which the rebels can vehicle drop-offs, mortar strikes and other support.

Wildlands sometimes feels unpolished. Screen tearing as the ground scrolls beneath you is pronounced when you're flying at high altitude. There is no snap-to-cover button, which is unfortunate for a cover-based shooter. Bolivians will stop their cars in the middle of the road rather than drive around obstacles, such that huge traffic jams ridiculously pile up.

I'm also concerned that too many side missions look like cookie-cutter, template missions that have been stamped on the map. Practicing the same assaults can lead to stellar squad performance, but new challenges that test your ability to communicate clearly and coordinate action are more fun.

Online functionality has been excellent, though, which is more important than these little flaws. The matchmaking system reliably loads you into a full squad of random players. You can also play Ghost Recon Wildlands solo with a team of three AI companions, which is actually a lot easier than playing with humans for how flawlessly the computer-controlled squad lands sniper shots.

But Wildlands really shines when you're playing with three people who cooperate. Executing a flawless, stealthy assault with a full team is extremely satisfying. It's worth badgering your friends to join you in the campaign to free Bolivia. For me, four-player co-op is the only way to play the game.

Disclosure: Ubisoft provided me a Xbox One review copy of Ghost Recon Wildlands for the purposes of this review.

Check out more gaming criticism from Mic, including reviews of Horizon Zero Dawn, Zelda: Breath of the Wild and 1-2-Switch.