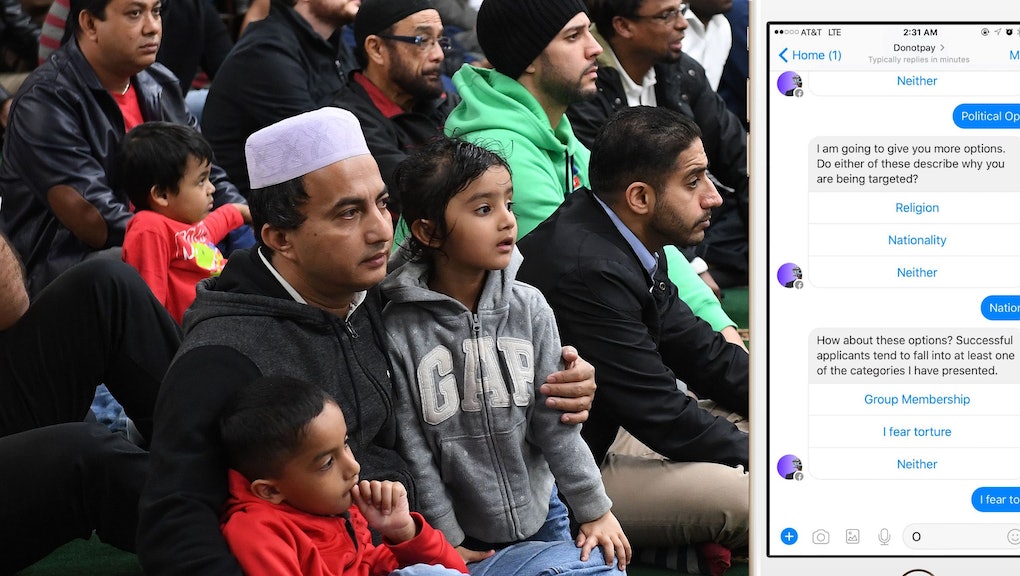 Refugees can now use Facebook Messenger to apply for asylum

But one thing many refugees still hold onto as a vital lifeline while seeking safe harbor is a smartphone.

Joshua Browder, a 20-year-old college student at Stanford University, has developed a chat bot that helps refugees apply for asylum in the U.S., Canada and the U.K. on Facebook Messenger. Browder's bots have made news before, tackling problems like parking tickets and homelessness. But now that he's taking on the refugee crisis, he's garnering unwanted attention from one of the internet's most famous white supremacists.

Through his work developing apps for advocacy groups like Freedom House, he saw how difficult it was for the homeless to apply for emergency housing. He later discovered that the process of applying for housing in America isn't so different for refugees than for the homeless.

So Browder made some tweaks and rolled out the latest version of DoNotPay — a bot that saves immigration lawyers valuable time by sorting through personal details and generating detailed applications for asylum. It's as easy as logging onto Facebook Messenger and answering a few questions.

DoNotPay was the first bot Browder made as a self-taught teenage coder. He created it to help people appeal their parking tickets. Since he released the bot over two years ago, more than 250,000 have successfully challenged their tickets, Browder told Mic in a phone interview. He ended up helping the homeless and asylum seekers when he sought to apply DoNotPay's system to other bureaucratic processes.

The asylum-help bot is simple: You start chatting with it, and it'll ask you questions — a combination of multiple-choice questions like "Where would you like to claim asylum?" or open-ended requests, like "Describe a threat to your safety." After the chat-bot conversation is done, DoNotPay immediately sends the user a completed form, along with instructions and further resources for how to get that form to lawyers and nonprofits that can help file an application.

The asylum bot got press from the BBC and the Guardian almost as soon as it came out, and over 5,000 people have begun sessions to fill out applications, Browder said.

What Browder didn't expect, however, was that a bot that helps refugees might make more enemies than one for the homeless. He'd worked with immigration lawyers and nonprofits for eight months, long before the refugee crisis facing Europe became a part of the U.S. political conversation.

"You're Jewish, but you're sending Muslims to America instead of Israel," Duke tweeted at Browder. "Why? Shouldn't Israel benefit from the joys of vibrant immigration?"

Never mind the fact that Browder says he has no affiliation with Israel beyond simply being Jewish, the tweet put a target on his back. Browder says he'd gotten hundreds of threatening emails and messages from online racists and xenophobes.

But it wasn't just overt white supremacists who wanted Browder to keep his silence. While setting up a public speaking gig at an upcoming corporate conference, he mentioned to a CEO that he was releasing a new project centered on refugees.

"He said, 'That's kind of partisan. Would you mind not speaking about that?'" Browder said. "How is it that helping humanity and refugees is a partisan issue?"

Still, Browder is hoping the abuse will die down soon and that the network of humanitarians who've counseled him through the process of building the bot will be able to get it into the hands of those who need it most.