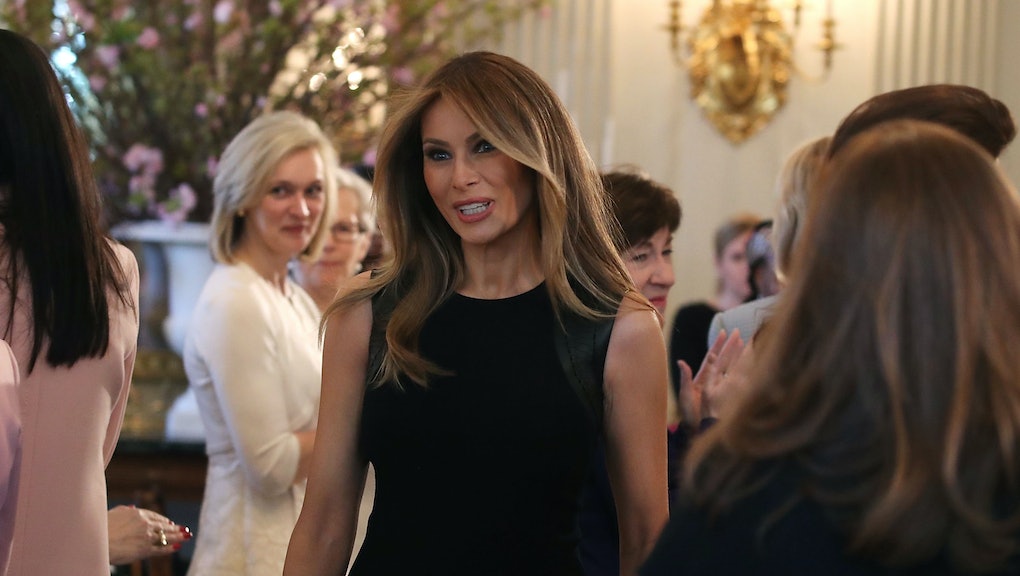 Things are going well for first lady Melania Trump. Her approval ratings are skyrocketing. She just made her first speech at the White House. She appears to be carving her own style for herself, full of ritzy European designers and a level of calm and composure that seems almost unattainable to most of us.

She's really coming into her own.

But she still remains a mystery. Following a week of rather high-profile appearances — like Donald Trump's address to Congress — she appeared just once over the past few days.

It was for good reason, though: to make her first-ever speech at the White House for International Women's Day.

Wednesday, March 8: Anything but red for International Women's Day

Who knew a little black dress could make such a statement?

For International Women's Day, people across the world were encouraged to wear red as a signifier of support for the women who would be striking for A Day Without A Woman. For those who couldn't strike themselves, wearing red was the least they could do.

Apparently, Melania Trump just wasn't feeling it. So rather than play into politics, she appeared at the White House to give a speech in honor of International Women's Day wearing a black sheath dress by Ralph Lauren.

With people like Hillary Clinton and female lawmakers dedicated to wearing red Wednesday, this could have seemed like a bit of a side-eye to the movement.

But really, Melania Trump was far from the only one to disregard the #WearRed incentive. Ivanka Trump wore dark purple to the event; Kellyanne Conway wore light blue. Melania Trump fit in just fine.

She looked impeccable in the dress, of course — as she always does. And although she frequently wears European designers, she opted for an American designer this time, and a rather bipartisan one at that. Ralph Lauren has been a favorite of not just Melania Trump, but Clinton, too.

While it might have seemed divisive to wear black instead of red, Melania Trump actually chose a designer who's the least divisive of them all.