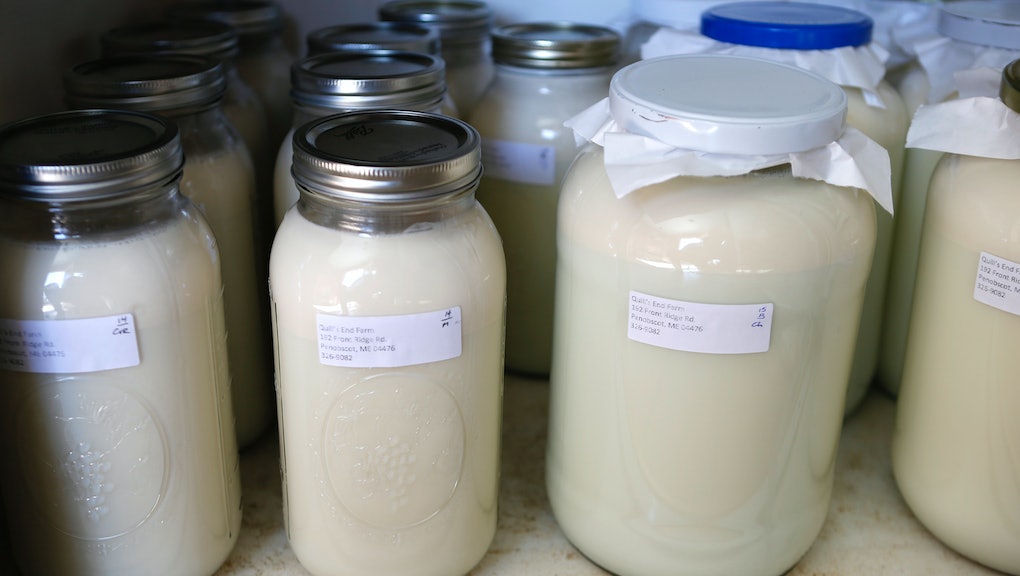 Is raw milk safe? Here's why the dairy product is so controversial.

In the early 2000s, the concept of eating exclusively raw food was the epitome of health. Raw vegetables shaved to look like pasta? Nutritious! Raw fruit cooked at an extremely low temperature for hours on end to resemble some type of dessert? Amazing!

In the years that followed, raw food lost its luster and cooking became totally fine for the health obsessed, though raw milk — milk that has not undergone the pasteurization process — has been championed by many as a healthier, more natural form of dairy. The stigma, however, is that raw milk can be dangerous.

In March 9, the Centers for Disease Control and Prevention confirmed that a soft cheese made from raw milk was indeed responsible for a recent listeria outbreak killing two people and hospitalizing six more. The idea of eating cheese that can literally end your life is horrifying, but then again, pretty much anything can be dangerous.

Truth is, there's no guarantee you'll really make it even crossing the street to get to a specialty cheese shop. Weeks before New York-based small dairy producer Vulto Creamery was found responsible for vending contaminated raw milk cheese, Sargento, one of America's largest cheese producers, which uses conventional, pasteurized milk, issued a recall to several of its processed sliced and shredded cheese products, thought to be contaminated with listeria as well.

So why is raw milk getting the bad rap?

Raw milk is unpasteurized milk, that is, milk that has not undergone a heating process intended to kill bacteria. Not all bacteria are necessarily bad, however, and products like cheese are crawling with all types of bacteria that give different cheese their funkiness.

When French scientist Louis Pasteur invented pasteurization around 1864, when some of the best ways to test food safety were to eat a food and see if you survived, the revolutionary method to make dairy products and other food safer to eat seemed like a great idea. Cut to a century and a half later, when there are new technologies to measure food safety, and some may wonder why America is still abiding by the same process?

For one thing, the modern dairy industry forces dairy cows to produce an average of six times as much milk as their farmed counterparts a century ago, and oftentimes these factory-farmed cows are pumped with hormones, antibiotics and bull semen to help them produce more milk.

The best way to ensure this large-scale milk is safe to drink? Pasteurization. And while pasteurization isn't unheard of outside the United States, raw milk, from cows and other dairy producing animals, is far more common in other parts of the world, including Asia and Europe. In France, raw milk cheese is common and generally perceived as safe — and delicious.

In the United States, the sale of raw milk for human consumption is prohibited in 20 states, and the 30 states that allow raw milk sales have various regulations. For example, in New York, farmers must obtain a special raw milk permit and put a gallon of their milk through various tests before it can be sold to consumers.

The CDC's most recent data shows an increase in disease outbreaks related to raw milk: From 2007 to 2009, 30 outbreaks were linked to raw milk, and from 2010 to 2012, 51 outbreaks were linked to raw milk. To compare, outbreaks of E.coli, norovirus and salmonella at Chipotle restaurants, which do not serve raw dairy, infected at least 500 people from 2015 to 2016. Of course, only about 1% of dairy sold in the United States qualifies as raw milk, and Chipotle makes billions of dollars in revenue annually, so is the concern targeted in the wrong place?

Raw milk can be healthier and more delicious

Kristin Canty, director/producer of Farmageddon: The Unseen War on American Family Farms and owner of the Boston-area farm-to-table restaurant Woods Hill Table, is a strong proponent of drinking raw milk.

"At first, the whole thought of it was unpalatable to me," Canty said in an interview. "I used to bleach everything, overcook everything..." But after being "so frightened" and drinking only a little bit of raw milk at a time before giving it to her children, Canty replaced all her milk with raw milk, and has been drinking it for almost 20 years, without any illness or adverse effects.

Though she was paranoid at first, Canty said she tried raw milk because she'd heard countless stories of people who had started to consume raw foods and raw dairy and, as a result, had their intolerances and allergies disappear. Since she introduced raw milk to her family, Canty says that her son's allergies have "completely disappeared" and she loves that the milk offers natural bacteria.

"It's so highly regulated [in Massachusetts] that I consider it a safer food than most, to tell you the truth," Canty said. In Massachusetts, the dairies are regularly tested for bacteria and harmful pathogens in their raw milk and required to use stainless steel tanks and sterilized equipment in production.

"You can get sick from any food, and there are people who are producing different kinds of food without being careful," Canty said, noting she feels more confident drinking highly regulated raw milk than other types of food products.

So why the stigma around raw milk? Canty said the CDC and Food and Drug Administration are "very, very focused" on the potential dangers of raw milk "without focusing on the fact that if it's treated and regulated" and sourced from healthy cows, it can be totally fine. The CDC's website is loaded with fear mongering regarding raw milk, Canty said, including video confessions of three women whose lives were ruined by raw milk and a colorful map showing that foodborne illness outbreaks are higher in states where raw milk is legal. In many ways, it looks as if the CDC is zeroing in on this issue more than others.

Canty said that in some cases, people get sick from another type of food, but if they've consumed raw dairy recently, they'll point a finger to the product with a bad reputation, even if it wasn't what caused their foodborne illness.

At her restaurant, Canty serves milk from a small farm that's been "pasteurized at the lowest temperature possible" and raw cheeses aged over 60 days, to align with laws about selling raw dairy. Since the restaurant opened in 2015, there have been no health issues with these products.

Perhaps most importantly, Canty said the flavor of raw dairy is reason enough to make the switch. She said her milk "tastes like ice cream" and raw dairy products "don't taste like plastic" but rather represent what the cow ate and how the cheese maker made and aged the cheese. Good bacteria and good flavor keep Canty and her family hooked on raw milk.

But is the science there to endorse raw milk?

A July 2015 study published in Nutrition Today looked into the health benefits or hazards of consuming of raw milk. The researchers found that "claims related to improved nutrition, prevention of lactose intolerance or provision of 'good' bacteria from the consumption of raw milk have no scientific basis and are myths." The study concluded that "raw milk is not inherently safe and carries a significant food poisoning risk with its consumption."

Subsequent studies have not endorsed raw milk as superior to pasteurized milk, though one can argue that more research is needed — research that the dairy industry isn't going to fund — to discern the benefits and drawbacks of raw and pasteurized milks.