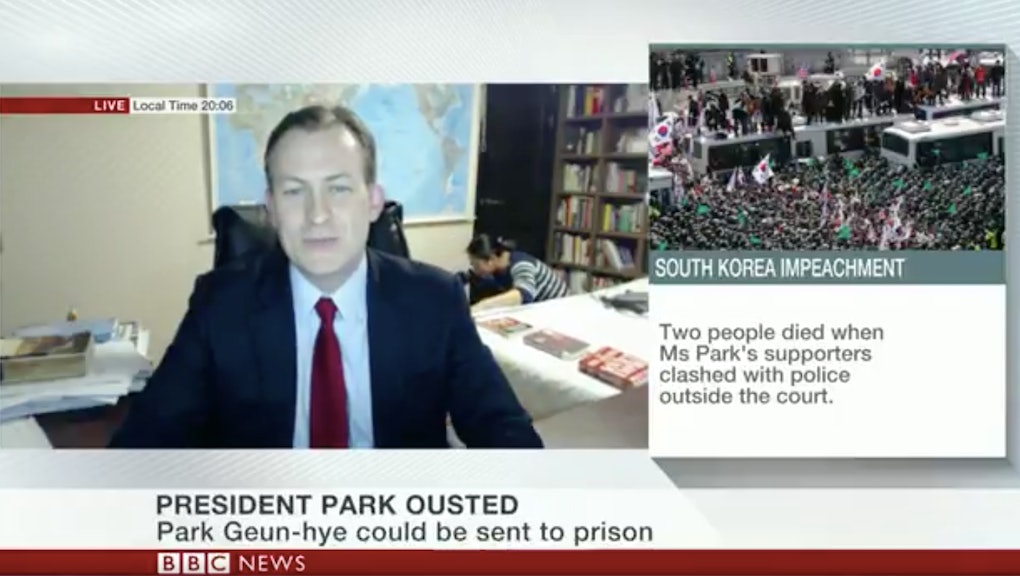 No, the Asian woman in that viral BBC video was not the nanny

Two adorable children took the Internet by storm Friday morning when they stumbled into the background of a very serious live BBC interview their father was participating in remotely.

The video became an instant viral hit as Robert E. Kelly, a political science professor at South Korea's Pusan National University, attempted to maintain his composure while shooing his children out of the room. Luckily, a woman enters just in time, scooping up the kids and shutting the door behind them.

While the spirited tots no doubt stole the show, there still remain some lingering questions — and misunderstandings — about the woman's identity. Is she the children's mother, or is she their nanny?

Even news outlets concluded the woman wrangling the children was a "frantic" or "frenzied" nanny, as in this Time article, which has since been updated:

But all signs point to the woman in the video being Kelly's wife and the mother of his children. Consider this tweet from December 2012 where Kelly refers to her as such:

While at first it might seem like an honest, irreproachable mistake to have confused Kelly's wife with a nanny, many people suggested there could be some subtle racism at work in assuming that an Asian woman is hired help.

XoJane contributor Nicole Blades wrote a piece in 2013 about her experience with people assuming that she, a black woman, was her mixed-race children's nanny and not their mother. Blades said she had an epiphany of sorts after someone asked her "Is that your baby?" one time too many.

"The question, though not intentionally malicious, implies, of course, that I am more likely the nanny, not the mother," Blades wrote. "But it cuts deeper than that. It's actually asking me to claim my child, to prove that I am the true owner. It is an affront to nothing short of our identities."

Blades added, "On some level, this question is merely a result of a failure of imagination, the inability of others to envision our connection. But it's also based on twisted assumptions about race, entitlement and socioeconomics."

So, yes — the BBC video is just another viral video that many people will soon forget about. But as Blades pointed out, unconscious biases about women of color don't dissipate so quickly.