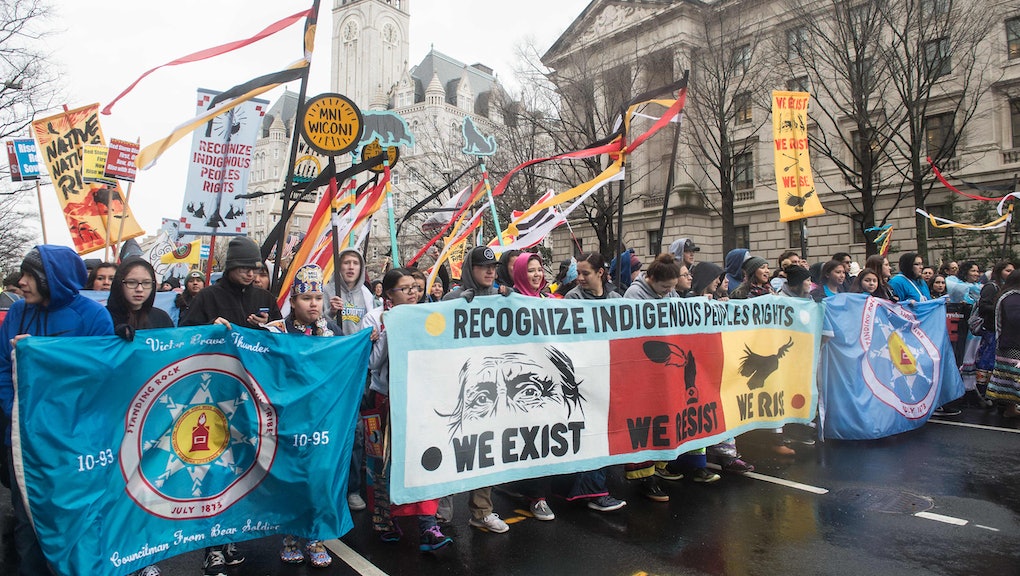 Powerful images from the #NativeNationsRise protests happening in Washington, DC

President Donald Trump and his allies may have ordered the removal of Native American demonstrators from their protest camp at Standing Rock in February, but it was far from a knockout blow.

On Friday, hundreds of indigenous protesters and their supporters rallied in cities across the United States to oppose Trump's policies on Native lands, and to demand he stop prioritizing corporate interests over their own.

Marching under the slogan "Native Nations Rise," protesters called for a halt to the president's push to complete the Dakota Access oil pipeline in North Dakota. Activists said the project threatens clean water access for the Standing Rock Sioux Tribe.

"Consultation is not enough," the protest organizers said in a press release, "tribes are demanding that businesses ask for consent from Native tribes before building on Native lands."

Trump accelerated the Dakota Access Pipeline's construction via executive order in January, a month after the U.S. Army Corps of Engineers denied an easement that would've permitted the project to be finished sooner.

Trump's reversal of the Obama-era decision to halt construction — in addition to his move to push for the Keystone XL Pipeline's completion — sparked an outcry among indigenous advocates.

They're still fighting back to this day.

In the four days that preceded Friday's actions, protesters set up a symbolic camp on the National Mall in D.C., with four tipis erected against the backdrop of the Washington Monument.

Organizers arranged teach-ins, cultural workshops, hosted panels and prayed at the campsite, according to the Native Nations Rise website.

The images and videos being shared on social media from the march showcase the same spirit of solidarity that animated the protests at Standing Rock last year.