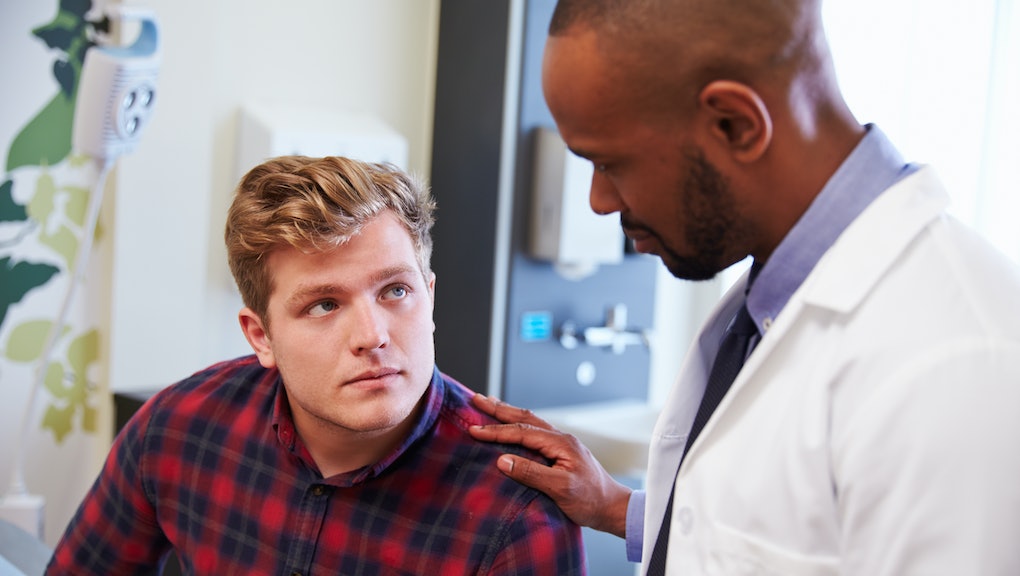 Texas tries very hard to legislate reproduction, generating a crushing volume of bills aimed at regulating the uterus. But what about the other side? If it takes two to tango, as the old saw goes, shouldn't those without uteri be bound by the same measure of genital legalese?

One Texas state lawmaker, Democratic Rep. Jessica Farrar, thinks so. On Friday, fed up with targeted abortion restrictions, Farrar filed House Bill 4260, a bill "relating to the regulation of men's health and safety."

If not properly stored for future use, ejaculation would qualify as "an act against an unborn child, and failing to preserve the sanctity of life," the bill reads. Men interested in extravaginal emission would be welcome to visit hospitals and private masturbatoriums that would help with the special storage requirements.

Farrar's measure repackages some of the familiar reproductive restrictions typically aimed at women, applying them to men instead. Under HB 4260, men would submit to "medically unnecessary" — sound familiar? —  rectal exams and sonograms for men seeking vasectomies, Viagra prescriptions and colonoscopies, and a 24-hour — ahem — waiting period between initial inquiry and procedure (or prescription). Like Texas' Senate Bill 25 before it, HB 4260 protects doctors who may feel squeamish providing the care their patients request, allowing urologists "to invoke their personal, moralistic or religious beliefs in refusing to perform an elective vasectomy or prescribe Viagra."

Leaving no stone unturned in its quest to equalize safety in men's and women's health care, HB 4260 mandates that "informational materials" on men's reproductive health — entitled "A Man's Right to Know," borrowing from Texas' "A Woman's Right to Know," an informed consent packet that propagates medically inaccurate misinformation about abortion — be distributed and explained to male patients pre-procedure.

In a Facebook post, abortion rights proponent Farrar described her bill as "satirical," but noted that "women are not laughing at state-imposed regulations and obstacles that interfere with their ability to legally access safe health care, and subject them to fake science and medically unnecessary procedures."

Also not laughing? Farrar's anti-abortion male colleagues. Rep. Tony Tinderholt, who once proposed a bill that would have criminalized abortion for patients and their doctors, told the Texas Tribune that he was "embarrassed for Representative Farrar."

"Her attempt to compare [HB 4260] to the abortion issue shows a lack of a basic understanding of human biology," Tinderholt said. "I would recommend that she consider taking a high school biology class from a local public or charter school before filing another bill on the matter."

That same complaint has often been leveled against male lawmakers who attempt to legislate women's bodies. To highlight the junk science nature of so many reproductive regulations, female lawmakers have occasionally proposed bills like HB 4260.

In 2012, Ohio Sen. Nina Turner proposed a bill that drew its wording directly from a version of the state's frequently proposed "heartbeat bill," and would have required men to undergo psychological counseling in order to obtain Viagra prescriptions. Oklahoma Sen. Constance Johnson proposed a "spilled semen" amendment to a personhood bill introduced in her state. Virginia Sen. Janet Howell once introduced a man-specific rectal exam amendment to an anti-abortion ultrasound bill.

Farrar came up with her "Men's Right to Know Act" when the Texas bill that would force hospitals to bury or cremate fetal remains — and was blocked by a federal judge in mid-December — found its way back to the State Affair Committee agenda. At that point, Farrar said she asked herself, "How much is too much?"

"Why is it every session that we have to come back and do something that chips away at women's reproductive healthcare?" Farrar said. "A woman spends half her life either trying to get pregnant or trying not to get pregnant. Reproductive health care is at the core of women's health, and that's what Republican men keep messing with."

She's hoping HB 4260 will prompt her colleagues to more closely examine their own actions. Failing that, she said, "maybe the people who vote for them will and they will make a change in who they vote for."