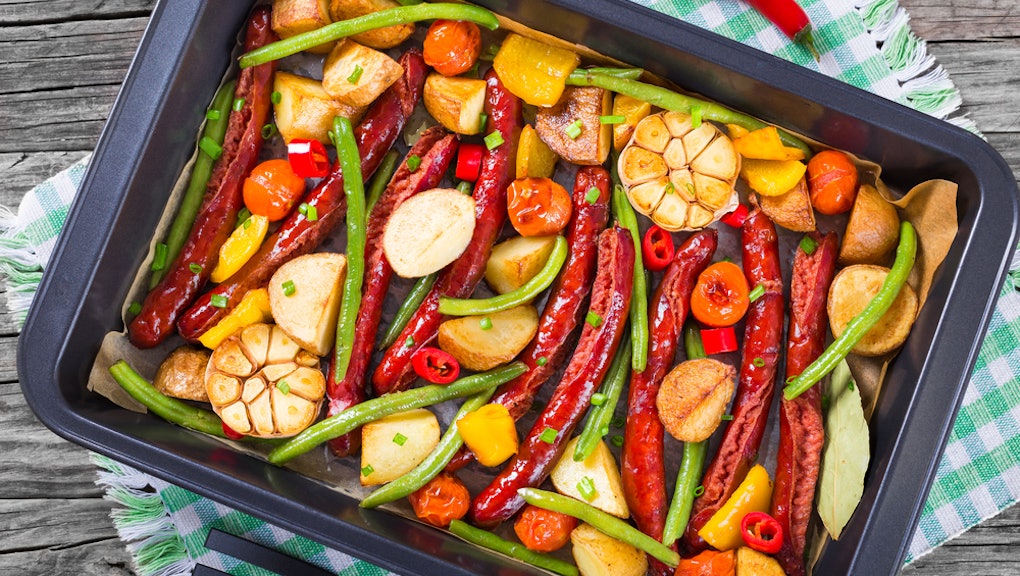 One Pan Meals: Are the quick dinner recipes really as simple as they seem?

It was a Monday night and I wanted to eat healthy. Such begins far too many stories of disappointing recipes, disappointing meals and lackluster cooking.

Fresh off my Sunday supermarket trip with two pounds of organic boneless chicken breasts, green beans, carrots, I decided my refrigerator would lend itself well to trying out the latest home cooking trend: sheet pan supper. Cooked all together at the same temperature for the same time, the sheet pan meal is supposed to make weeknight cooking quick and efficient, with minimal prep and cleanup in between. A home cook without a dishwasher, I was in.

In February 2014, Melissa Clark wrote a piece in the New York Times entitled "Behold, The Sturdy Sheet Pan", in which she praised the utilitarian baking tool for its plentiful capabilities. "If you have sheet pans, then you can make a supremely tasty supper for your family (protein, starch, green vegetable) in the oven all at once, with a minimum of prep and very little cleanup," Clark wrote.

The sheet pan dinner, however, didn't go fully viral until after the lure of boxed meal kits with their shiny pre-portioned ingredients faded and the sturdy old sheet pan suddenly became the coolest cooking tool on Pinterest.

As Google Analytics data shows, interest in the Sheet Pan Dinner started peaking in October 2016, with interest rising worldwide since this past fall.

In February 2017, Melissa Clark authored a new article, "For Maximum Crunch (and Convenience), Pull Out Your Sheet Pan," celebrating the concept of cooking an entire meal on a single sheet pan. To supplement this riveting trend piece, the New York Times shared a collection of 23 one-pot meals, some more traditional stews and others sheet pan specialties like roasted chicken with potatoes and a broccoli pasta that requires the addition of a pot of boiling water to create the sheet-pan supper.

As recommended, I heated my sheet pan in the 400 degree oven while prepping the ingredients. Though my chicken breasts didn't have skin on them to get crispy, the advice seemed easy enough to follow, and I was going to trust the pros. I chopped up red potatoes into bite-sized pieces and sliced the carrots to match the width and length of the green beans. To marinate the hodgepodge, I stirred together my usual salad dressing blend of balsamic vinegar, olive oil, honey and Italian seasoning.

I sprayed the pan with coconut cooking oil, laid out my four boneless, skinless chicken breasts and spread out my vegetables and some frozen yellow squash disks around the tray. I then drenched the entire pan in marinade, sprinkled some salt and pepper on the mix and put it in the oven for the recommended half hour.

How was this possibly going to work? In the past, when I cooked all of these ingredients for a meal, the potatoes took close to an hour, while the veggies cooked in under 10 minutes. Chicken was an entirely different story. I'd actually never roasted boneless, skinless breasts before because, boring?

Some sheet pan recipes call for the meat to be added earlier, and vegetables spread out 15 minutes into the cook time, but that wasn't the meal I was promised. I wanted a one and done meal, one where I could catch up on an entire episode of Jane the Virgin and not worry about cooking dinner until the oven time was up. Maybe I should have just made a slow cooker meal.

When I asked one chef at a trendy Williamsburg restaurant on sheet pan dinner advice, he had no idea what I was talking about. Some chefs, however, stand behind this efficient (and allegedly tasty) cooking technique.

"We're all about sheet pan dinners in my house. It makes dinner easy," Laurence Edelman, executive chef and co-owner of New York's Left Bank said via email. "We're a small family, so we actually use a toaster oven!" Edelman said pretty much anything can work as a sheet pan meal.

"The key is to trim each ingredient to the appropriate size in relation to the group," he advised. "Things that cook slower should be cut into smaller pieces and things that cook faster should be larger. Also, it's key to keep things spaced nicely so you don't create a steamy environment. That steam will inhibit browning, and browning equals flavor." Crowding your mushrooms, or any ingredient, is a rookie mistake.

My sheet pan dinner, which, to be honest, I put nominal effort into and had disparagingly low expectations for, was as crowded as a music festival during perfect weather. It was a very steamy environment. When my timer went off, my chicken breasts were indeed cooked to the right temperature (though they felt rubbery), the green beans had adapted brown-hued, limp quality on the pan and the potatoes seemed almost as hard as when I'd put them in the oven an entire episode of Jane The Virgin ago. I removed all the ingredients from the pan except for the potatoes and let them cook more while my chicken cooled and my girlfriend broke out the ketchup to add appeal to this uninspiring healthy meal.

So was my first attempt at the sheet pan dinner totally misguided? Chef Edelman said boneless meat is totally fine to use, because it's easier, and he recommends working with a "sturdy protein like chicken or salmon" when building a sheet pan dinner. Basically, if you'd roast it, it will work. New York Strip, on the other hand, should be seared, not sheet panned.

To add to that protein, and not to crowd it, Edelman said to add "things that taste good when they're baked," his favorites being halved brussels sprouts (cut side down), halved endive spears, radicchio wedges, halved mushrooms and diced turnips. Season with olive oil and salt and you have a toaster oven-ready, chef-approved meal.

Small pieces, no steam and a sturdy protein are all you need to actually succeed at sheet pan dinners, and if I ever decide to attempt this again, I'm hoping that my spread-out, halved and diced ingredients will be immensely more palatable, no ketchup required.