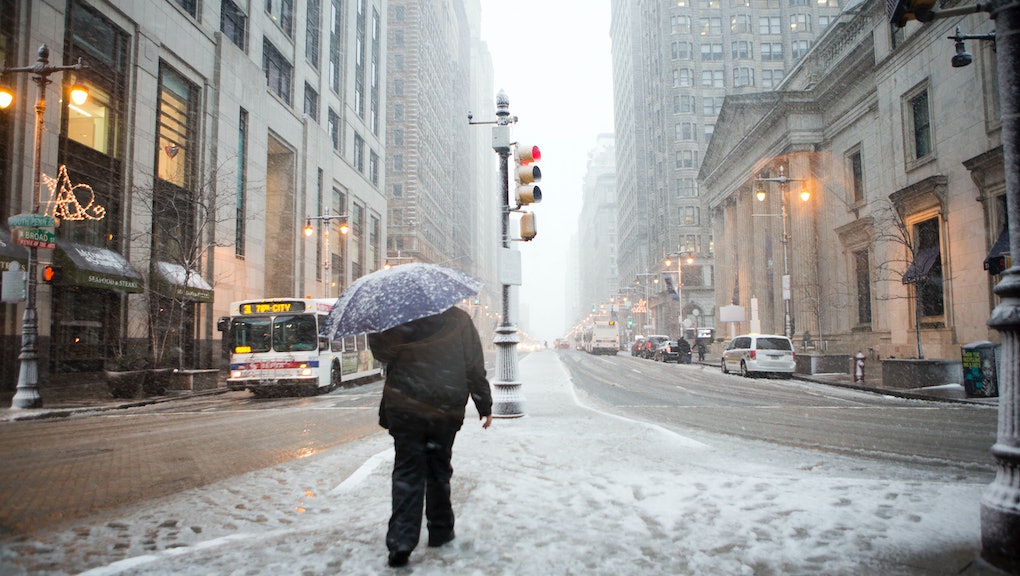 How much snow will Philadelphia get? Here are the expected snow totals for the region.

We're on the cusp of spring, but it won't feel that way for Philadelphia and much of the northeastern United States this week.

A massive winter storm that has already grounded flights in the Midwest is due to hit the East Coast on Monday night and pummel the region with heavy snow and dangerous winds until Wednesday.

Philly will be in the crosshairs of Winter Storm Stella starting Monday night. According to the National Weather Service, the snow is expected to start around 11 p.m. Monday and continue overnight and into the Tuesday morning commute. Wind gusts as high as 35 miles per hour are also expected. The worst of it will likely be over by Tuesday evening, but some snow is still possible Tuesday night and Wednesday. When all is said and done, the city will probably be blanketed in 8 to 12 inches of snow.

A winter storm warning will be in effect for the region until 6 p.m. on Tuesday.

Southwest New Jersey, northern Delaware and part of northern Maryland are included in the warning.

The nor'easter — which is also predicted to drop more than a foot of snow on both Boston and New York City — will make for extremely hazardous conditions on roadways, and the NWS advises residents of the region to travel only in emergency situations. If you must travel, the NWS recommends taking precautions, such as keeping a flashlight, food and water in your vehicle.

Stella — arriving less than a week before the official start of spring — is predicted to be Philadelphia's largest storm of the mild winter; the city has seen just nine inches of total snow so far this season.

Philadelphia and nearby municipalities are likely to announce snow emergencies and travel restrictions may be put in place due to poor road conditions. Southwest Airlines canceled all its flights out of Philadelphia Tuesday, and American Airlines canceled flights through 5 p.m. on Tuesday. As of Monday afternoon, no school closings or changes to mass transit had been announced. Officials warned that heavy snow and strong winds could lead to power outages, and utilities companies are planning to put on extra personnel to help respond to any issues.