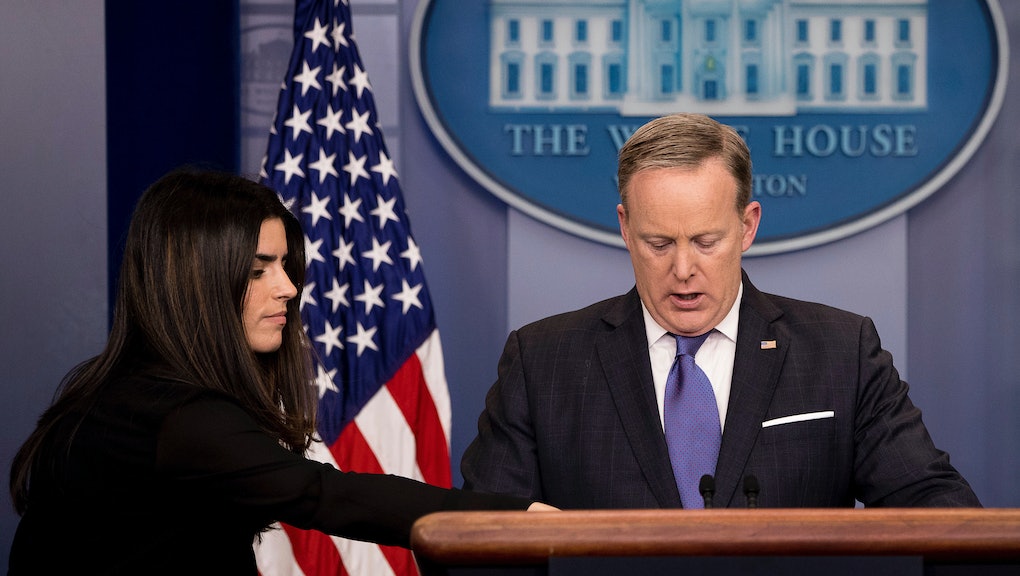 "Can you say affirmatively that whenever the president says something, we can trust it to be real?" Peter Alexander of NBC News asked Spicer at the daily press briefing.

"If he's not joking, of course," Spicer said.

The exchange grew out of a barrage of questions about Trump's unproven contention, in tweets, that former President Barack Obama had Trump Tower wiretapped before last year's election.

Spicer's initial reaction sparked a hum in the briefing room, which has been known to straight-out laugh at the president's spokesman for sending muddled, mixed messages.

"Every time that he speaks authoritatively, that he speaks, he's speaking as president of the United States," Spicer followed up.

Even, Alexander asked, when Trump asserted millions of Americans voted "illegally" in 2016?

"He does believe it," Spicer said, ending the volley.

Spicer parried more questions about whether Trump was serious about accusing his predecessor of listening in on his phone lines, particularly in the face of demands from Sen. John McCain (R-Ariz.) and others that the president back up his claims with evidence or withdraw them.

Much of the back and forth centered on Spicer's argument that Trump had put quotes around "wire tap," meaning he was speaking broadly about surveillance as opposed to personally accusing Obama of listening in on his calls (as the tweet might suggest).

Spicer also ended up on the hot seat again about Trump's suddenly sanguine view of federal job growth statistics, which he had dismissed as "phony" before winning the Oval Office.

And asked if Trump, as promised, had donated his presidential salary from February to charity, Spicer pivoted to say the funds would be given away at year's end — to a cause chosen with the help of the press corps.