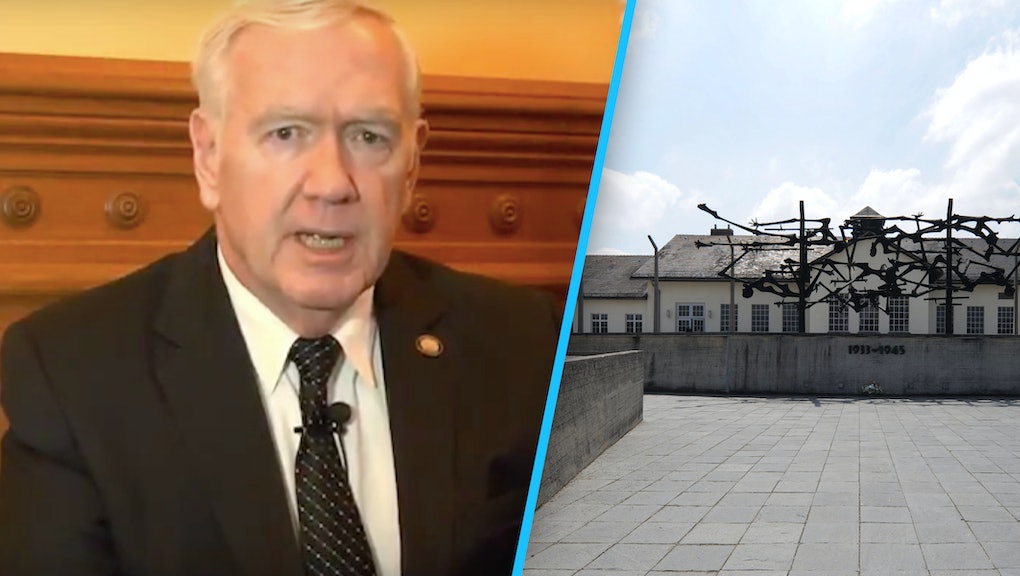 On March 8, Kansas Sen. Steve Fitzgerald fired off an ungrateful missive after receiving a thank you note from Planned Parenthood Great Plains. One of Fitzgerald's constituents made a donation to the health care provider in the senator's name, a donation he did not appreciate because, in his estimation, Planned Parenthood is on par with Dachau, the first death camp established in Nazi Germany.

"It is with great dismay that I received your letter that a donation was made in my 'honor' to your heinous organization," Fitzgerald wrote Planned Parenthood Great Plains, in a letter the organization tweeted. "This is as bad — or worse — as having one's name associated with Dachau."

"Shame on your organization and shame on anyone that would attempt to blacken my name in this manner," read Fitzgerald's kicker.

The offending donation was made by Ali Weinel of Prairie Village, Kansas. She told the Kansas City Star she gave Planned Parenthood $25 in Fitzgerald's name not "out of spite," but because he had apparently offered unsatisfying responses to concerns she'd voiced about recent anti-abortion-rights legislation.

"I just was so angry and knew that the only way I could be less angry was if I made a difference," she told the paper. "So that's what I did."

In an interview with the Kansas City Star, Fitzgerald doubled down on his statement.

"It was either send them that or ignore it," Fitzgerald told the outlet. "I figured, I don't want my name associated as a donation to Planned Parenthood, in my name, to go on undenounced by me."

"I think the Nazis ought to be incensed by the comparison," he said. "What I'm saying is, they're both exterminating innocent human life."

Fitzgerald has been a vocal supporter of his state's legislation limiting abortion rights. In 2013, he threw his weight behind a "fetal personhood" bill that claimed life began at fetilization. It also obligated physicians to feed their patients medically inaccurate information about abortion's potential risks and tightly restricted sex education curricula, especially on the copulation and contraception fronts.

"The human is a magnificent piece of work at all stages of development, wondrous in every regard, from the microscopic until full development," was how Fitzgerald explained his support at the time, according to the Associated Press.

Fitzgerald's response may have the opposite of its intended effect: Planned Parenthood Great Plains spokesperson Bonyen Lee-Gilmore told the Kansas City Star that, while she found the "attack on women's right to choose" to be "unacceptable," it had already energized donations in Fitzgerald's name.

As retired Kansas journalist and current blogger Yael Abouhalkah put it: "Donate to Planned Parenthood and piss off a Kansas state senator."