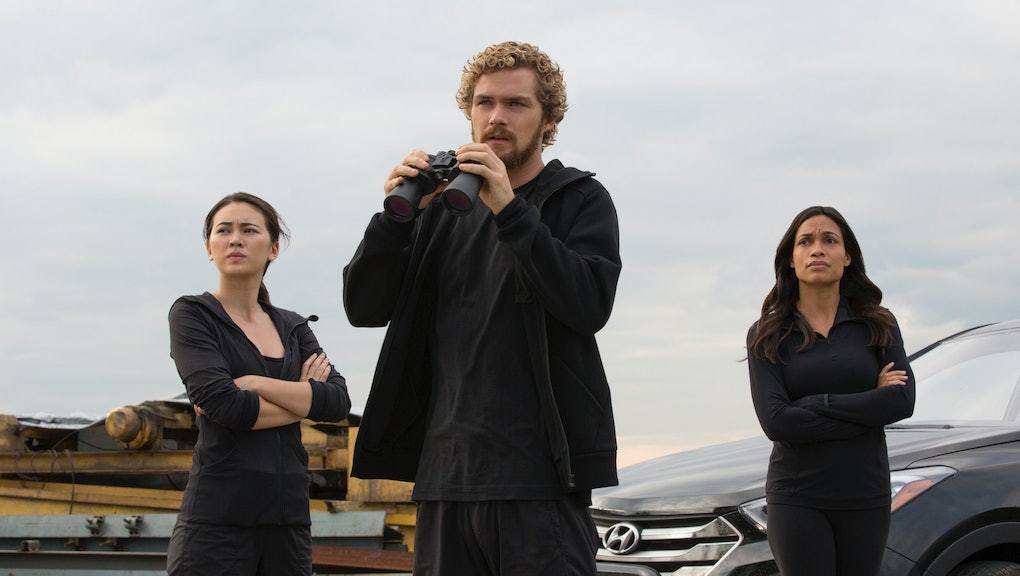 On Friday, Netflix will release the entire first season of Iron Fist, the streaming platform's fourth Marvel series. To date, Marvel and Netflix's partnership has gone off without a hitch, as Daredevil, Jessica Jones and Luke Cage all received resoundingly positive reviews. Now, the reviews for Iron Fist are starting to trickle in, and shockingly, it seems that Netflix and Marvel have misfired.

As of this writing, the latest Marvel series on Netflix has a mere 12% on Rotten Tomatoes from 17 reviews — meaning just two critics have rated it fresh. But could it be that the reviews are negative because of public perception of the current president of the United States, Donald Trump? It's unclear, but that is what Iron Fist star Finn Jones believes.

Jones noted that he believes that there has been a change in viewpoints since the 2016 election. "We filmed the show way before Trump's election, and I think it's very interesting to see how that perception, now that Trump's in power, how it makes it very difficult to root for someone coming from white privilege, when that archetype is public enemy number one," the actor explains.

While it certainly is true that Trump is far from popular — his latest approval ratings from Gallup are at 42% — it's not entirely clear that this fact alone would have much impact on Iron Fist's critical approval.

Regardless of why the series reviews are negative, though, it is important to note, as Jones does in his conversation with Radio Times, that critics have thus far only seen the first six episodes of Iron Fist. According to the actor, "People need to see the full series — Iron Fist doesn't end until the last episode of Defenders." Still, fans are no doubt hoping that they do not have to push through six disappointing episodes for the series to pick up.

Of course, just because the critics have dismissed Iron Fist, does not mean that fans will feel the same way. It is not unusual for there to be a disconnect between fans and critics when it comes to comic book adaptations (of course, with Marvel they usually see eye to eye). Still, a 12% on Rotten Tomatoes is certainly not promising.

Iron First will be released March 17 on Netflix. You can read Mic's review of the series right here.