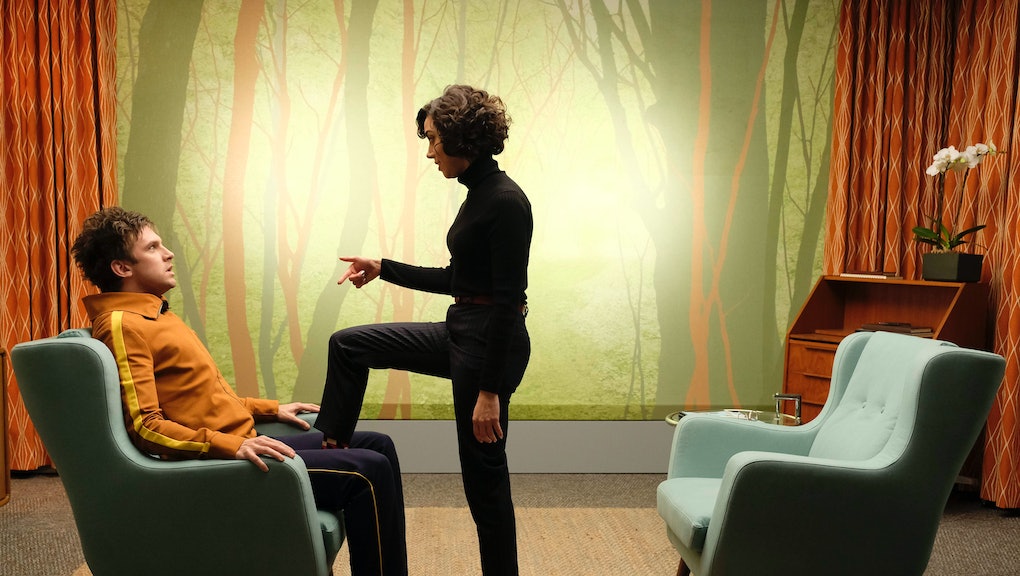 'Legion' lets loose the "Devil With the Yellow Eyes," and everyone's screwed

It was easy to tell something was off with David Haller in Legion's fifth episode as the character's mousy demeanor was replaced with a considerable amount of hubris to go along with casually murdering dozens of Division 3 lackeys. Put simply, this was because David wasn't really in control — his actions were the result of the mysterious (and absolutely terrifying) "Devil With the Yellow Eyes."

The episode ended on something of a cliffhanger; as David and Syd were about to be shot by the Eye, they were thrust into his "white room," a place of solace likely traversing the astral plane, except Syd is promptly attacked by the yellow-eyed demon in his true, bulbous form. But just as quickly as she's being cornered in the room, she awakens — along with all the other main characters — in the psych ward Clockworks that David first inhabits in the series premiere. Except Aubrey Plaza's Lenny, who is more than likely the aforementioned demon, is now the institution's head psychiatrist.

Was everything up to this point on Legion a twisted fever dream inside David's, or Syd's, mind? It could cross viewers' minds in the show's sixth episode, if only for a second, but it doesn't take long for Syd to question the nature of this faux reality. Lenny the psychiatrist is just a bit off, despite her facile attempts to appear nurturing.

This is really the first time Legion has lent full control of the series' narrative to its mysterious villain, and in the process, it puts every major character in serious danger — while almost definitively revealing the true identity of the yellow-eyed demon in the X-Men universe.

What happens if anyone's trapped in the astral plane?

The Clockworks-like mental institution the yellow-eyed demon conjures up might not fool Syd, but all the other characters adjust to their new surroundings rather comfortably. Melanie lingers on the memory of her husband Oliver — who Lenny says died years ago — while Ptonomy reflects on his mother's sudden death in the kitchen when he was a small child (his mutant power is remembering everything, so unfortunately this isn't hard). By focusing on their personal traumas, the demon is able to ground them in this faux reality, with nary a thought that any of this isn't actually happening.

So what would happen if everyone's stuck there for awhile? This version of Clockworks exists in the astral plane — we find out for sure once Oliver shows up in his old-timey diving suit — and as the show has previously explained, anybody who spends a great deal of time in the alternate dimension could lose their mind. Oliver has lived in an ice cube for years, wears fly suits and boogies a lot, just to give you an idea, and he's a pretty powerful mutant in his own right.

In other words, the longer each character spends in the astral plane, the shittier it gets. So it's a good thing Oliver first rescues Cary in his diving suit, before Cary borrows the suit to subsequently find Syd. Staying in Oliver's ice cube might not be the ideal situation, but it's better than dealing with the demon's cruel manipulations.

OK, so Legion is dealing with the Shadow King, right?

We previously laid out a few theories on the real identity of the yellow-eyed demon. There were a couple X-Men villains from the comics, as well as David, exuding a disturbing alternate personality. But we can now say, with near certainty, that we're probably dealing with the Shadow King. Cary described David being infected by a parasitic mutant in episode five, which would fit the Shadow King's M.O. However, hearing that description straight from the devil's mouth, so to speak, makes it even more telling.

At the end of the sixth episode, David meets with psychiatrist Lenny to ask her if she's seen Syd, who has precipitously vanished. The conversation gets testy, however, when Lenny describes her disdain for the concept of love. Since love is, technically, a chemical, Lenny compares it to ophiocordyceps unilateralis — or as most people refer to it, the creepy fungus that turns ants into mindless zombies. That's a bit odd for a psychiatrist to say, no? Lenny reveals her true nature to a very perplexed David, and says that she knew David's real father; the one who gave him up for adoption (in the comics, David's father is Professor X, so it's a big deal).

"He thought he could hide you from me, but he was wrong," she says. "I found you. Such a sweet little baby. And me, your very own walking, talking fungus. What do you think he'll say when he finds out?"

Hearing Lenny describe herself as a mind-controlling fungus — coupled with the fact that the demon took a few previous forms in David's life, including an imaginary childhood dog named King — are some unsubtle clues. It also sets up an enticing endgame for Legion's first season. The premise for the entire series is predicated on David's psyche, and now he has his own literal demon to fight within his mind. We assume he'll eventually be able to best Lenny/the yellow demon/the Shadow King; perhaps within the next couple of episodes.

That should prove to be a fitting precursor to the ultimate villain of Legion: David himself.

Mic has ongoing superhero coverage. You can follow our main superhero hub here.