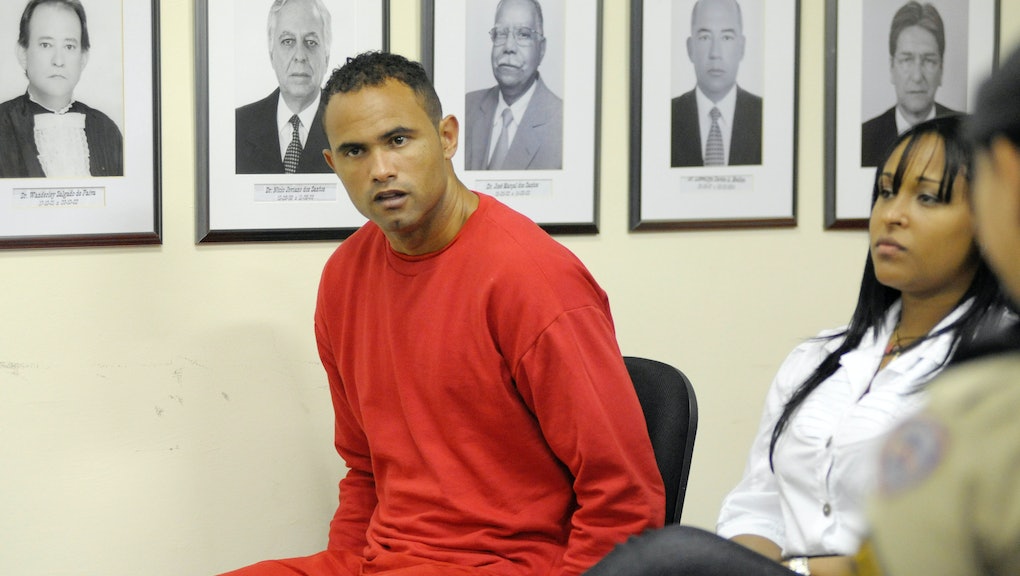 This pro athlete had his ex killed and her body fed to dogs. Now he has a new job.

A Brazilian soccer player convicted of commissioning his ex-girlfriend's gruesome murder was released from jail in February — and could soon be headed back to the soccer field.

In 2010, de Souza's 25-year-old ex-girlfriend and the alleged mother of one of his children, Eliza Samudio, disappeared shortly after bringing a lawsuit against de Souza for child support. The goalie was arrested and charged — along with a group of eight co-conspirators that included his ex-wife — with having tortured and murdered Samudio, whose body was never found.

A cousin of de Souza testified that Samudio's remains were never recovered because her body was fed to several Rottweilers. The cousin, then 17 years old, told police the group murdered Samudio at de Souza's bidding, while he watched.

"They tied her hands, and this other individual strangled her," police investigator Wagner Pinto said at the time, according to CNN. "Later they deboned and disemboweled her."

As the Guardian reported, de Souza confessed to having played a role in Samudio's murder and was sentenced to 22 years in prison. By the time of his release, he had served roughly seven years.

Since its signing of de Souza, Boa Esporte sponsors Nutrends Nutrition, CardioCenter and Magsul have revoked their support, though the club has stood by its decision.

In a statement posted to Facebook, Boa Esporte President Rone Moraes da Costa essentially argued de Souza was punished in accordance with Brazilian law and that the club was not responsible for his release. Now that he's free, though, Boa Esporte seems more than happy to give de Souza the opportunity "he deserves," like playing soccer and raking in lots of money for the organization.

"Yes, it is true that there's nothing illegal in Bruno's release from jail," Brazilian law professor and preeminent feminist Debora Dinez told Broadly. However, that doesn't make his release — nor his new job with Boa Esporte — any less abhorrent. Historically, Brazil has done a characteristically bad job serving justice to perpetrators of sexual violence, Dinez explained. The fact de Souza served any jail time at all is rare.

"Bruno's fast hiring and warm welcome from his fan base is yet another sign of criminal selectivity, aggravated by a context of social intolerance regarding femicide and violence against women," Dinez said.

According to Amnesty International, Brazil has seen a 24% upswing in lethal violence against women over the past 10 years, ever since the country enacted laws against domestic violence. In 2013, Brazil had a higher rate of female homicide than any other country — and by a wide margin, according to Public Radio International. The Guardian reported in June that Brazil ranked fifth on the list of countries with the world's highest femicide rates, proving the laws just don't seem to be working.

A statement from Brazil's Popular Feminist Front of Varginha, as translated by the Guardian, sums up the issue well:

A woman-killer must not be allowed a life acclaimed by the media. Bruno is no longer just a goalkeeper; his notoriety reflects the ease with which a woman's life is forgotten in the interests of a sporting career.