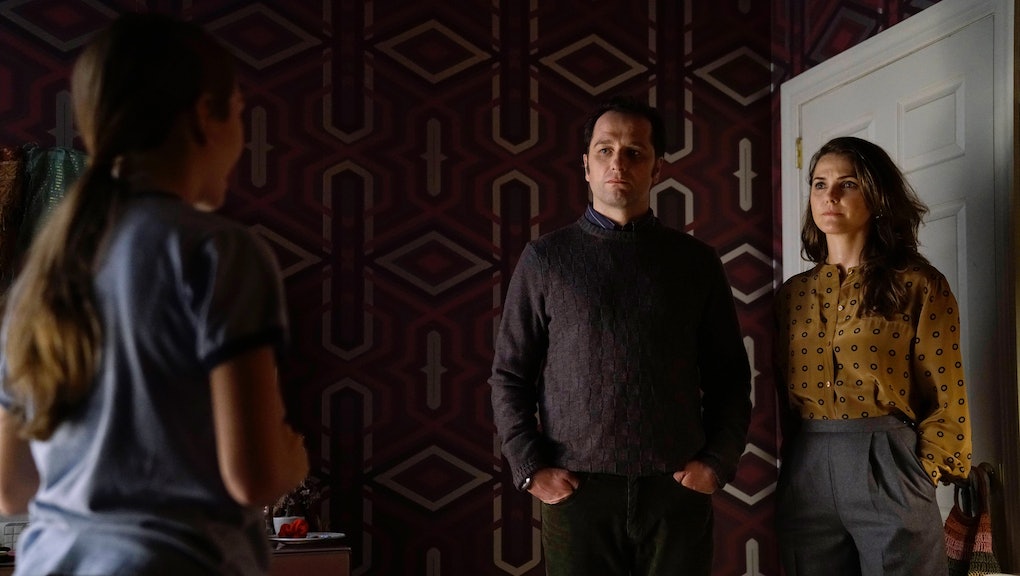 'The Americans' Season 5, Episode 2 Recap: Paige is not the only problem in 'Pests'

What's the harder pest to combat? The ones which are bred to destroy a nation's food supply? Or teenage boys?

That's the question posed during The Americans' second episode of its new season, "Pests." Officially, KGB agents Philip and Elizabeth Jennings are busying themselves with their latest big mission: the season-long Soviet food-shortage story arc. But what's really raising their stress levels is not if, but when, their daughter, Paige, will slip up and reveal their true identities to her boyfriend, Matthew Beeman.

It doesn't matter how many self-defense classes Elizabeth gives an increasingly ripped Paige — who has now ditched the Esprit sweatshirt for a tight black tank top — the girl is still having trouble sleeping (she's taken to snoozing in the closet). And what's not helping matters is these lessons come with a heaping spoonful of guilt over Paige's staunch refusal to break it off with a guy whose dad poses an immediate risk to the entire Jennings family. "Any other boy but him," Elizabeth pleads with her daughter.

Up until now, Philip and Elizabeth have been banking on their neighbor Stan's happy-but-clueless attitude toward the burgeoning romance between the two families. But their worst fears become imminent when, as usual, over a few beers, Stan reveals to his BFF Philip that something is up with Paige. Or, as Philip recounts it to Elizabeth, "Everything doesn't seem right in Paige-land." Paige can swear up and down that she would never tell the truth about her parents to Matthew, but all bets are off in the throes of passion — and that's what really scares Philip and Elizabeth.

A quick Stan Beeman detour here: The FBI agent serves as a catalyst for a lot the episode's narrative — namely the intel on Paige. But he's also got his own intriguing story line this season. Specifically, he's doing the lone wolf thing at work, trying to keep the relocated-back-to-Moscow KGB agent Oleg Burov from being turned by his colleagues. Ever since Oleg tipped off the FBI to William and his bioweapons secrets last season, Stan has developed a newfound respect for his onetime enemy. Now that Stan finds himself defying his superiors, going so far as to getting a clandestine message to Oleg halfway across the world, it makes you wonder if he's the one who will ultimately end up working for the Soviets. Stan also appears to be playing with fire when it comes to his new gym-rat girlfriend. It's never a good sign if someone is so perfect you'd describe them as "the female version" of your best friend. And when that best friend is actually a Russian spy pretending to be an American, then, Stanny, baby, you'd better start doing some background checks, pronto.

Back to the Jennings: There is no doubt that Philip and Elizabeth are worried about Paige's health and well-being. However, one of the greatest unanswered questions that has pervaded The Americans over the years is how much of the KGB spies' concern is out of love for their daughter, or the fear that she'll blow their decades-long mission? Paige was indeed born out of love, but of her parents' love for their country, not so much for each other (at the time): She is more a part of their cover than anything else, especially since she's slowly starting to fulfill the Centre's intention of infiltrating the United States via second-generation, American-born Russian spies. Elizabeth even remarks to Philip in this episode that she's "sick of treating [Paige] like a goddamn kid," indicating that she's impatient to get her daughter working for them full-time.

Not surprisingly, the final scene of "Pests" suggests that Philip and Elizabeth's anxieties are less about soothing their daughter than ensuring the continuation of their mission. During what is probably the weirdest sex talk ever, the Jennings teach Paige a technique that is supposed to help her stay focused when her teenage hormones start to get in the way. She's instructed to rub her thumb and forefinger together whenever things get hot and heavy between her and Matthew. But just as you're thinking, "This is the best the KGB has to offer?" that's when you realize Philip and Elizabeth are actually doing something far more crafty: They're manipulating Paige's guilt. As she's being taught the simple technique, Paige is told to use it "to remind yourself of who you are and where you come from." It's a loaded, but brilliant scene. The camera pans away from Philip, Elizabeth and Paige in what looks like a sweet bonding moment between parents and child, but in reality, it's just Paige getting more and more entrenched in the family business.

The family that keeps secrets together, stays together — but for how long? Who's to say all of these KGB-approved methods will even make a difference. If Paige is falling apart on the inside, then the girl needs therapy, not more spy lessons.

Elizabeth's impatience to get Paige on the KGB payroll is understandable given two major developments in "Pests": One, the season five main mission is more clearly mapped out via the Jennings' handler, Gabriel, which is that the Centre suspects the United States is purposely contaminating grain being sent to the Soviet Union. Two, Vietnamese spy kid Tuan is far more likely to blow the Jennings' assignment in the field than Paige could by whispering sweet nothings into Matthew's ear.

After meeting up with Gabriel immediately after disposing of Hans' dead body — and turning over the Lassa fever sample retrieved from William's corpse — Philip and Elizabeth are briefed on the potential starvation that could encapsulate the USSR. "Going after people's food? I thought there were things they wouldn't do," says an incredulous Philip, whose affinity for the U.S. has always been greater than that of his wife. Elizabeth then heads off, in disguise, to Illinois, following this season's big target, Alexei Morozov, the Russian defector consulting for the Department of Agriculture. Alexei's trail leads to a giant greenhouse sheltering rows upon rows of both healthy amber waves of grain — and dry, dead wheat stalks. As Elizabeth is swarmed by thousands of bugs that she realizes are being bred to destroy the grain, we get a rare moment of sympathy for the hardened Russian warrior: She's not angry, but sad. Like Philip says, going after people's food is a new low in geopolitical relations.

So when she and Philip don their "Mr. and Mrs. Eckhert" pilot/flight attendant personas for an all-American evening out at Bennigan's with the Morozov family and Tuan, their table piled high with endless plates of delicious food, they bring their acting A game. Not only are they dealing with the knowledge that Alexei may be deliberately trying to starve their homeland, but they also have to listen to their dinner companion scream "I hate Russia!" at the top of his lungs. America, what a country!

Philip and Elizabeth may not be able to demonstrate their discomfort, but Alexei's son, Pasha, sure can. The teen, embarrassed by his outspoken father, complains in Russian that he would "rather die back home than live here" — oblivious to the fact that Philip and Elizabeth can understand him. Between Alexei's not-so-casual mention that his father spent 15 years in a prison camp, and Pasha's nonstop misery, there's got to be more of a backstory going on here.

Speaking of backstory: We don't get the truth about the Morozovs just yet, but Tuan's bitterness over his experience in Vietnam is already shaping up to be a powder keg. During the car ride home from Bennigan's, Tuan discloses to Philip and Elizabeth that his entire family was killed when his village was bombed. But his disgust over Pasha's lack of gratitude (he's alive and he's got plenty of food to eat) quickly overrides any compassion we might have for him. And when he brags that he can get Pasha to do anything he wants, because "he's weak," Elizabeth looks more concerned than satisfied with her latest recruit.

You wouldn't hear this kind of hotheaded language coming out of Paige's mouth, that's for sure.