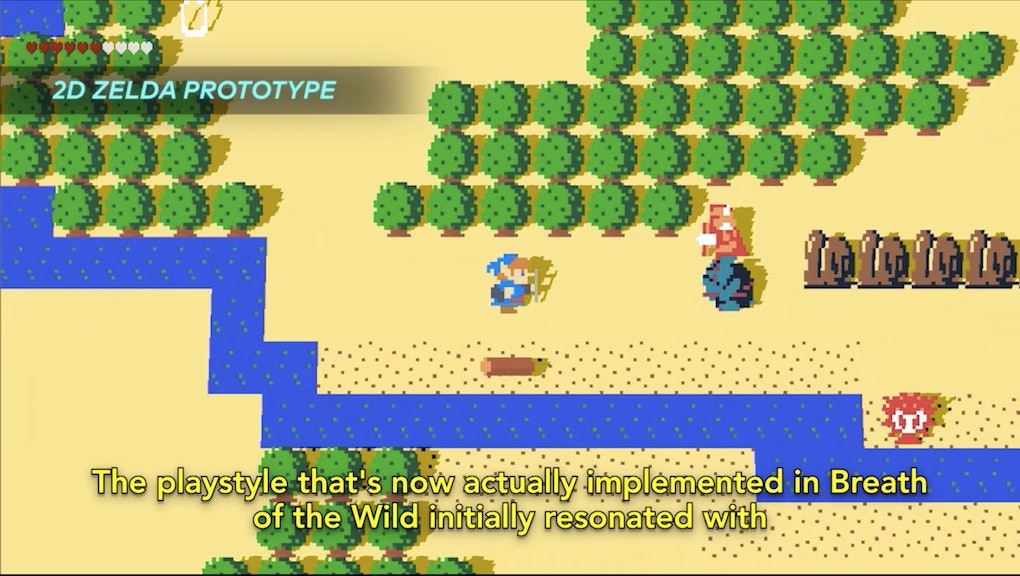 Legend of Zelda: Breath of the Wild may be the most complex game in the Zelda series. While almost every Zelda release comes with great game design and high ratings, Nintendo's new making-of series proves just how far the company went with BotW.

The three-part video series, posted to YouTube, showcases what it took to make various aspects of the Breath of the Wild experience. It even gives us a glimpse of the 2-D game the team created to get a sense of how the final version would work.

Zelda: Breath of the Wild spoilers: Beginnings as an 8-bit game

The first video in the Zelda: Breath of the Wild series discusses the game's beginnings. Early in development, the team knew they wanted to create a game that broke the conventions of a normal Zelda title.

This is pretty clear to anyone who's played the game for as little as five minutes. What's less clear is there was once a 2-D version of Breath of the Wild. This Nintendo creation was never released, but it helped the team figure out what mechanics should be included in the full experience. Lighting an arrow on fire and then using a Korok Leaf to spread flame, for instance, are both present here.

Later in the video — at around eight minutes in — we learn that the Sheikah Slate was based not on smartphones, tablets or the Wii U GamePad (okay, maybe partly) but on items from the Jomon period in Japan.

There's also talk of potential UFOs almost making it into Zelda: Breath of the Wild. So, yeah.

Nintendo's open-air concept video shows off what the team had in mind for the world design. Previous games were essentially composed of connected rooms, while are Breath of the Wild is one continuous level. According to the video, it's 12 times the size of Twilight Princess.

The second video also gives a glimpse into the music of the game. Breath of the Wild is the first Zelda game to make use of piano in the game's soundtrack. If you've already played, you know how powerful the subtle notes in the game can be as a result.

Make sure to check out footage from five minutes in to find out how bad you actually are at combat.

Zelda: Breath of the Wild spoilers: Princess Zelda was the hardest character to design

The story and character Breath of the Wild video offers a look into the design of the game's characters. According to art director Satoru Takizawa, Zelda herself was the most difficult character to design in the game — if only due to the amount of back-and-forth the team conducted in choosing what her character should be like. As one of the three core characters, along with Link and Ganon, Zelda was an essential design project.

Zelda: Breath of the Wild spoilers: The creators' favorite foods, characters and more

The fourth video in the series of Zelda: Breath of the Wild making of videos was released later than the other three. This one touches on each of the Zelda creators' favorite things in the game, including foods, characters and more. Check it out below!

Find out all there is to know about Zelda: Breath of the Wild, including how to preserve your items, how to beat bosses like the Stone Talus and Lynel, the best recipes for Link and how to take on the game's shrines. You'll also want to find out where all the great fairies are in the game and how to use amiibo with your version of Zelda.