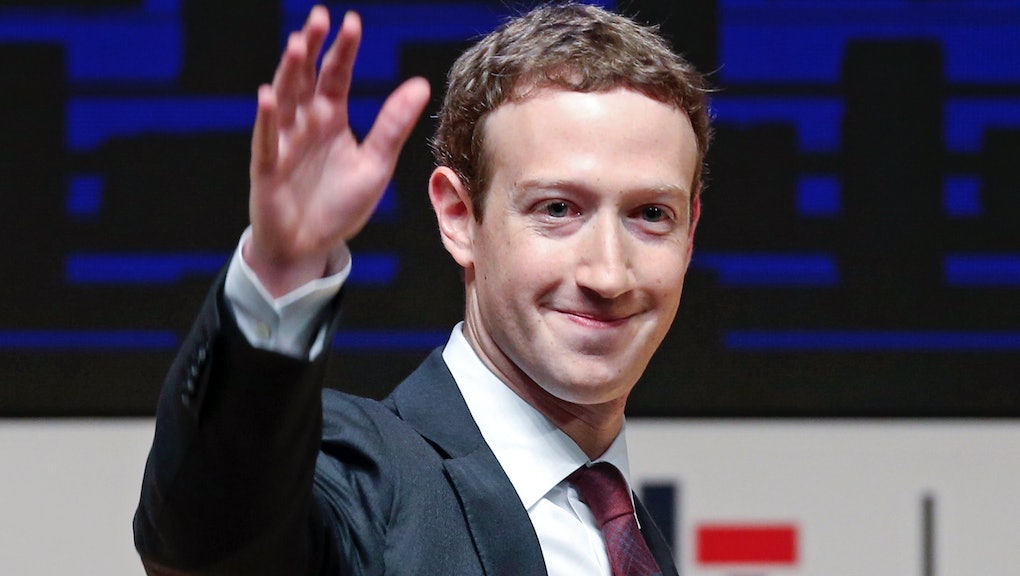 Zero people of color hold a management position or a seat on the board at Facebook. These powerful roles are held predominantly by white men. Facebook as a whole is 90% white and Asian. And as CEO Mark Zuckerberg continues his humanitarian tour of the country to give "everyone a voice," his repeated defense of his company's abysmal lack of diversity exposes a poisonous attitude that's all too common amid the affluence of Silicon Valley.

When a student at North Carolina AT&T State University, a historically black school, asked Mark Zuckerberg during a Q&A what the CEO personally does to make sure that Facebook "maintains a free and safe environment for the expression of all thoughts and feelings," Zuckerberg offered up board member Peter Thiel as an example: a white male conservative billionaire Donald Trump adviser who has actually advocated against racial diversity.

In Zuckerberg's response to the student — streamed on Facebook Live — he said that in order to create a "well-informed community," you need two things: a diversity of viewpoints and "enough common ground in the views that people have that you can make progress together." The full response:

"We have a board member who is an adviser to the Trump administration, Peter Thiel," Zuckerberg said. "And I personally believe that if you want to have a company that is committed to diversity, you need to be committed to all kinds of diversity, including ideological diversity.

Here, Zuckerberg conflates contrary political views from other white men with the importance of hiring more people from underrepresented groups. His answer reinforces the notion that hiring someone with contrary opinions — like "no corruption" being "bad" and "boring" — is the same as hiring women and minorities.

Zuckerberg also failed to mention the importance of diversity beyond the context of ideology — a glaringly absent point from a CEO whose company, as of its 2016 diversity report, is only 2% black overall and 3% black in senior leadership. The needle didn't move from 2015 to 2016 at all across the company, and only increased by 1% in leadership.

It's worth reiterating that Thiel literally wrote a book on the harms of diversity and contributed $1.25 million to Trump's explicitly xenophobic presidential campaign. That Zuckerberg bolsters Thiel as an example of diversity within one of the most powerful companies in the world, while failing to acknowledge the need for more minorities in leadership, is insulting. It reveals a troubling viewpoint on what it means to be both diverse and inclusive. It shows a hostile disregard to the students in that room — and all past, present and future minorities in tech.