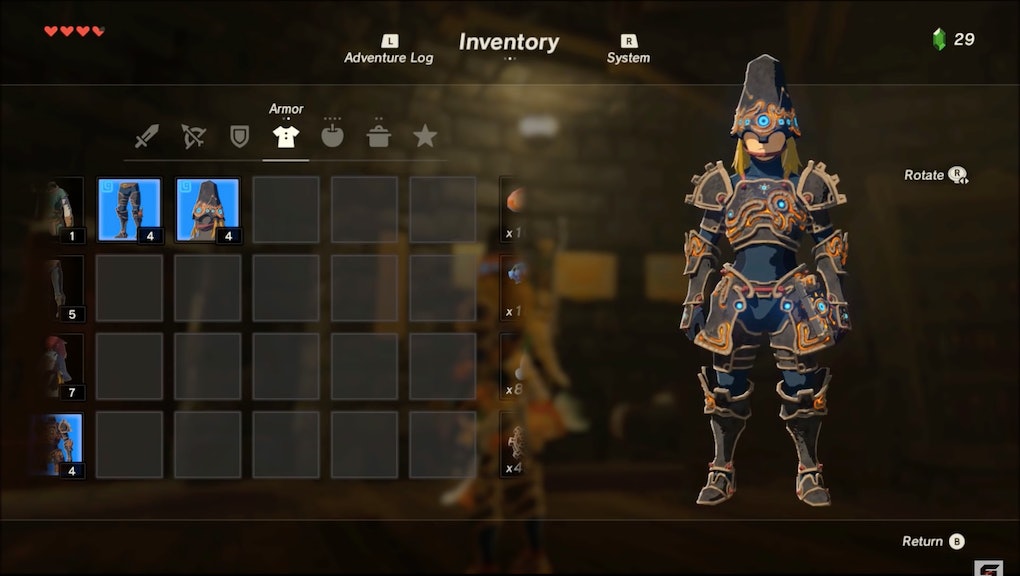 'Zelda: Breath of the Wild' Ancient Armor: Location and guide for where to get it

There are a lot of great outfits in Legend of Zelda: Breath of the Wild, from climbing gear to a barbarian getup. But you're probably wondering if there's something you can do to take the bite out of the Guardians' ancient laser beams, which can otherwise make quick work of Link in a single blast. That's where the ancient armor comes in.

Here's everything you need to know about getting the ancient armor from Robbie the researcher and his assistant, Cherry, in Breath of the Wild.

Zelda: Breath of the Wild ancient armor location: Where to purchase the armor

If you want to deck yourself out in old guardian parts, you'll have to complete the Akkala Ancient Tech Lab questline to restart Robbie's forge. Once you do that, Robbie will offer to sell you Ancient weapons — those cool, glowing ones you find after killing some of the smaller guardians — along with some ancient armor that protects you from guardians' last blasts.

According to VG247, each piece of the armor will cost you 2,000 rupees, 20 ancient gears, 5 ancient shafts and 3 ancient cores. All those parts will drop from guardians, but you'll have to scrounge up the rupees somewhere else.

It's definitely not cheap, but the benefits are well worth it. Having the ability to consistently get weapons, especially ones that look as cool as the ancient weapons do, can be a lifesaver late in the game.

Zelda: Breath of the Wild ancient armor guide: What does it do?

Each piece of the ancient armor set adds four defense, but that can go as high as 28 per piece if you upgrade it fully. This makes it the strongest set of armor in the game, not counting the Champion's Tunic. Each piece also confers the "Guardian Resist" benefit on you, which reduces the damage you take from guardian eyebeams, making it especially handy for guardian-heavy portions of the late game.

It stacks, too. So if you wear the full set, you'll be capable of fighting on even after taking a few lasers on the chin.

Additionally, as you upgrade the set, it gains another ability when you wear all three pieces: a buff called "Ancient Proficiency." This ability increases the damage you deal with ancient weapons, which you now have basically unlimited access to.

It's a super-strong armor set to grab if you don't mind fighting enough Guardians to get the parts you need to complete it, so make sure you take some time to help out Robbie at the Akkala Ancient Tech Lab and bask in the luxury of wearing a bunch of busted-up ancient technology on your body.

Find out all there is to know about Zelda: Breath of the Wild, including what to expect from the Wii U version, how to preserve your items, how to beat bosses like the Stone Talus, Lynel, the Guardians and the Hinox, the best recipes for Link, how to take on the game's shrines and our coverage of the game's outfits, like the Climbing Set, the two sets of heat resistance armor you can find and how to dress Link in the classic green tunic. You'll also want to find out where all the great fairies in the game, all available stables, how to use amiibo with your version of Zelda and how to increase your health, stamina and weapon slots.