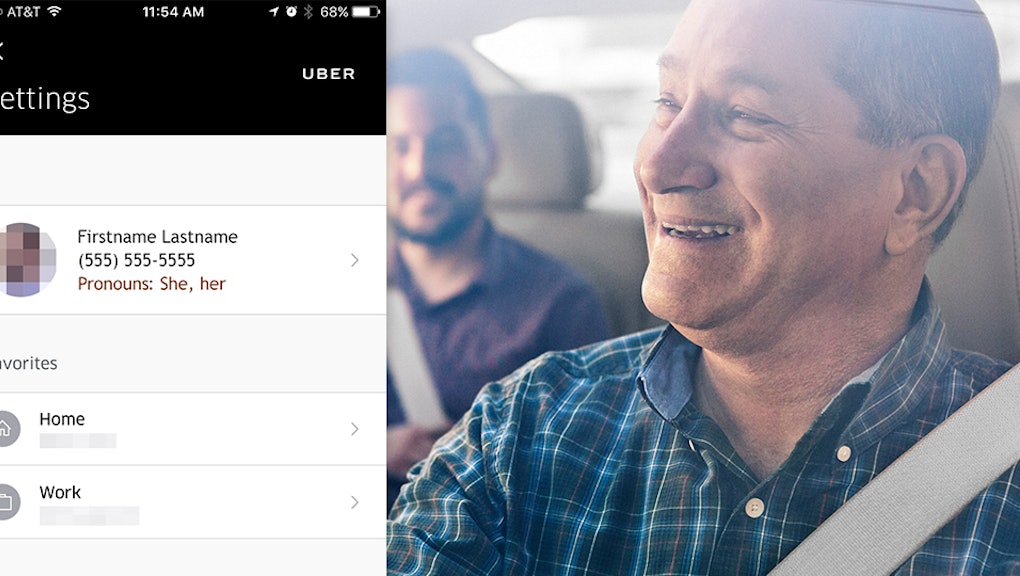 My alarm goes off at 5:30 a.m. I'm anxious and on deadline for a project I've been working on for about two months, but right now my dog's tail is wagging and he needs to be let out.

I can feel Seattle softly waking up to the familiar sound of rain. I am swallowed into the day. It's time to shower, do my hair and get dressed. I'm trying to rush through my typical morning routine to avoid Uber's surge pricing in this weather, so I feed my dog, grab a piece of fruit and I'm out the door and in the car.

Whatever thoughts I had before this moment are gone. Now I've got bigger problems: I'm a transgender woman locked in a car with a stranger who just misgendered me.

I'm a transgender woman locked in a car with a stranger who just misgendered me.

Here's what's going through my head: Are they stronger than me? If I call them out on gendering me properly, will they hurt me? Are there any signifiers in their car that point to them being liberal or conservative?

These are questions transgender and gender-nonconforming people ask ourselves every day in the United States. At a time when our basic rights are under attack, anti-trans violence has become so commonplace that people who are not trans are desensitized to it. (Uber's own problem with assault is a separate matter entirely.)

So, I'll stay silent and text my friend to let them know where I am in case something goes bad. I don't want to be rude and get a bad rating from the driver, so I'll smile when they speak.

The first few times this happened, I blamed the driver. I thought, "Can't they see I'm wearing a skirt? What about my lipstick?" But when I pulled back, I realized this wasn't really the driver's fault. A passenger's profile photo isn't the right information a driver needs to correctly gender them. Even if I were wearing a skirt with lipstick, it wouldn't mean I identified as a woman.

Even if I were wearing a skirt with lipstick, it wouldn't mean I identified as a woman.

When I reached out to Uber customer service about these experiences, they apologized. But after this frightening and invalidating experience happened roughly 10 times, it was clear there was a root problem that needed to be addressed.

The solution seems obvious: People should be able to mark their preferred gender pronoun in their Uber profiles.

I started poking around to see who else was having this problem, and a quick Twitter search validated my fears.

An Uber driver cares about making sure the right person is in their vehicle and getting them to where they need to be, but Uber designers are the ones responsible for the mobile app's user experience.

When your product centers around strangers interacting with each other, the end-to-end experience needs to be considered more deeply than just the pixels on a screen.

People should be able to mark their preferred gender pronoun in their profiles.

This is solvable. If Uber had a diverse group of people do a simple exercise in which they listed the most crucial information a driver needs to know about a passenger — and vice-versa — to ensure both parties have a safe and pleasant experience, gender identity would probably make the cut.

This is a fundamental problem in Silicon Valley. These companies might have floats in pride parades and chip in during times of hardship, but when it comes to considering marginalized lives in everyday product discussions, they fall short. Without good PR from supporting trans and nonbinary folks, we're simply not worth the investment of resources.

And this problem goes deeper than just Uber. Lyft, Postmates, Rover and other apps that focus on connecting strangers for various services need to show up for trans and nonbinary identities in their customer experience.

Our identities are no longer a spectacle — they're commonplace. A study by the Williams Institute showed there are roughly 1.4 million U.S. adults who identify as trans. Our anxieties and safety cannot be afterthoughts.

Our identities are no longer a spectacle — they're commonplace. Our anxieties and safety cannot be afterthoughts.

So, how do you do it right? With their more inclusive gender-identity options, Facebook and Tinder are off to a good start. In Uber's case, it should offer four options:

These options are needed in four primary locations: onboarding, settings, the passenger's display and the driver's display. Using myself as an example, the information would read Robyn, she/her, 4.73 stars. Sounds pretty simple, right?

It's time for Uber to grow up. #DeleteUber may have inspired 200,000 customers to cancel their accounts, but Uber will continue to lose more if it can't address its problems. Uber CEO Travis Kalanick needs to stop yelling at drivers who have valid concerns, and the company needs to respect women in its office and make core product decisions with marginalized lives in mind.

Diversity and inclusion can't just be buzzwords when lives are at stake. Seven trans women have already been murdered in the first two months of 2017. Products can only be as strong as the amount of diversity within the team who built them, and these lived experiences need to be taken seriously.

We don't need your pride float. We need your support when you're making product decisions. Show up for us — we deserve it.

Robyn Kanner is a co-founder and designer for MyTransHealth living in Seattle, Washington. She has previously worked with the White House under the Obama administration to make informed design decisions for queer people, created the Let Trans Women Live campaign and guest-lectured at Cooper Union.