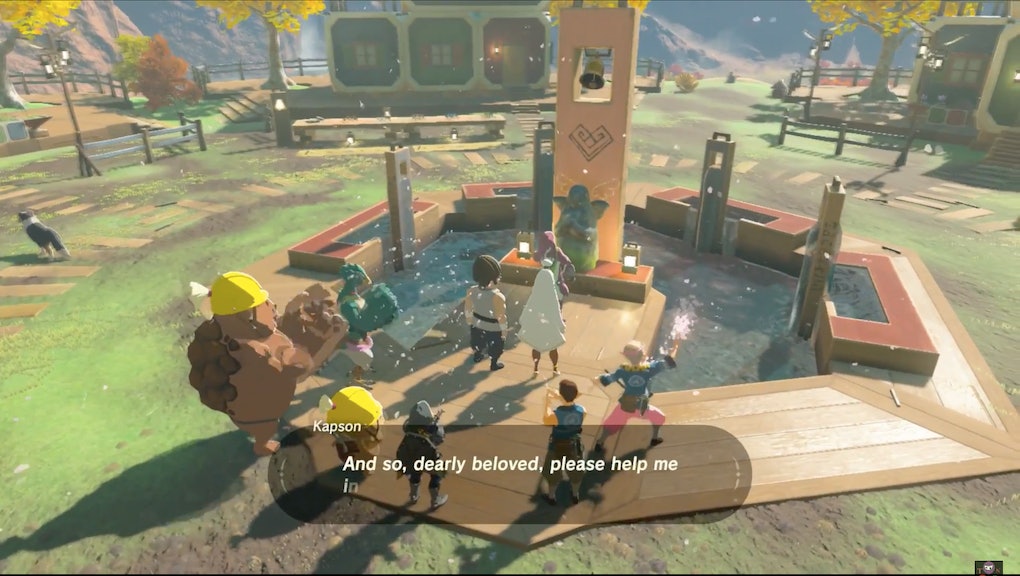 'Zelda: Breath of the Wild' Tarrey Town Guide: How to complete "From the Ground Up"

The Legend of Zelda: Breath of the Wild is an open-world adventure game full of endless things for you to do, from solving shrine puzzles, to showing off a fancy horse you found on top of a mountain, to helping a fish-man named Fronk find his wife. But the real treat in Breath of the Wild — aside from helping Link save Hyrule from Ganon (again) — is that it finally offers you the chance to be a homeowner and subsequently build an entire village from the ground up. And who wouldn't want to do that?

Want to know how? Then read on for more information on Tarrey Town BOTW.

You've got to learn to crawl before you can walk. So it follows that, for your from the ground up BOTW journey, you've got to build a house before you can build a town. So, the first thing you'll want to do is head to Hateno Village in the game's Necluda region, according to guides from Gosu Noob and YouTube account Austin John Plays.

Make your way through the town until you reach a bridge with a dilapidated house on the other side. Head behind the house and you'll see a bunch of construction workers, including one in pink pants named Bolson. Talk to him and he'll tell you the house is for sale — for 50,000 rupees. Even though you  (probably) don't have that much cash, agree to pay. He'll lighten up and give you another offer: The house is yours for 30 bundles of wood and 3,000 rupees.

You'll get the bundles of wood by chopping down trees, and you can get a lot of rupees in short order by following some of our tricks and tips. Once you've done that, you're free to become a homeowner.

Now talk to Hudson, Bolson's mustachioed second-in-command who's sitting behind him. He'll tell you he's headed to the Akkala region and says that you should say hello sometime.

Zelda: Breath of the Wild Tarrey Town guide: How to complete the "From The Ground Up" quest

According to Gosu Noob and YouTube user TheUnstealthyNinjas, Hudson has relocated to an island in the middle of a lake southeast of Death Mountain. When you talk to him there, he says that he's decided he's going to build a town since he's stuck here anyway. However, he needs wood and people to make Tarrey Town a reality. The first person he needs is a Goron with the brute strength to move rocks with "son" in his name, as well as 10 wood.

To find the Goron, go to the Southern Mine at night. You'll see a large Goron sitting by the fire, named Greyson. Talk to him to complete this step of the quest, then head back to Hudson to see what else he needs. Greyson will open up a jeweler's shop as well, which is handy to have around.

Next, Hudson claims he needs 20 pieces of wood and a Gerudo tailor to give Tarrey Town that old razzle-dazzle, but you've got to make sure her name also ends in "son." To find this Gerudo, head to the Kara Kara Bazaar Oasis and look for a Gerudo woman sitting in a small tent on the southwest shore of the Oasis named Rhondson. Simply talk to her to get her to come to Tarrey Town, and you'll be well on your way toward the next step of the quest. Rhondson will open a tailor that sells the Desert Voe set, if you still need some heat-resistant clothing.

Head back to Hudson; this time he'll say he needs 30 pieces of wood. Once you get that to him, he'll ask you to find a Rito to help with distribution and shipping who's willing to relocate. Unsurprisingly, he asks that this Rito have a name ending in "son," as well.

If you head to the Rito Village in the southern part of the Hebra region, you should see a solitary Rito standing on a lookout just a little bit east of the main settlement. His name is Fyson, and he's more than happy to relocate to Tarrey Town and help out.

Once you've gotten Fyson to head to Tarrey Town, talk to Hudson again. He needs 50 bundles of wood this time, and a priest-like Zora to conduct his wedding ceremony. Yup, while you were gone, Rhondson and Hudson got engaged! To find the priestly Zora, head to Zora's Domain. Not that it bears repeating at this point, but Hudson also says he needs the Zora's name to end in "son." He might have a complex.

You'll find him behind the stairs leading up to the king, and he'll tell you his name is Kapson. Bingo. Tell him to come to Tarrey Town and he'll agree. By now, the end is in sight for this (admittedly) extremely long quest.

Once you've convinced Kapson to come officiate the wedding — and open an inn — all you need to do is head back to Tarrey Town. Hudson will tell you that he'd like to invite his boss, Bolson, and his coworker, Karson, to the wedding. So go back to Hateno Village where you bought your own house and started this whole crazy quest chain and invite the two of them. You'll find them next to the campfire in town. Once that's done, head back to Tarrey Town to enjoy the wedding ceremony and relax after a job well done.

Additionally, once this quest is completed, you'll gain access to the town's secret vendor, Granté. He hangs out on one of the roofs in Tarrey Town, and is the only way to get a new Hylian Shield if you accidentally break yours. Not bad for a day's work!

This article was originally published on March 16, 2017