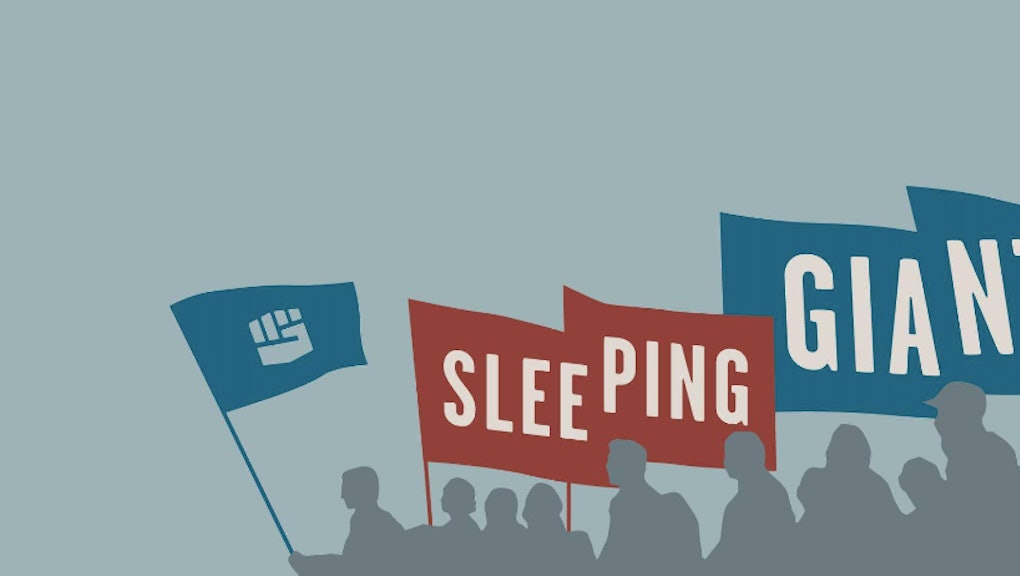 Meet Sleeping Giants, the group trying to take down racist websites by stopping their ads

This is a tweet the president of the United States sent just a week before his inauguration:

This is another tweet the president of the United States sent just a few weeks later:

Clearly, even when it comes to things that seemingly shouldn't matter to him right now, like his personal relationships with retail stores and obsession with sales, Trump gives a fuck. Lots of fucks.

So naturally, there are a few viral campaigns out there taking aim at just that.

First there was #GrabYourWallet, the consumer-led effort to get stores to drop clothing lines from the Trump family, from Donald to Ivanka. Nearly six months in, and #GrabYourWallet has made great strides, with retailers like Nordstrom and Sears all being pressured by enough people on the internet that they've dropped Trump family merchandise.

Also joining #GrabYourWallet is a far more low-key and mysterious — yet highly effective — online campaign called Sleeping Giants, which takes aim not at the Trump administration directly, but a website linked to Trump that is filled with racist, sexist, homophobic and xenophobic articles like "Here's why there ought to be a cap on women studying science and maths" and "Gay rights have made us dumber, it's time to get back in the closet."

According to Sleeping Giants, which was founded by several people who still remain anonymous, Breitbart is public enemy No. 1 when it comes to spreading racist, sexist and xenophobic rumors and stories online.

"When we saw what was on [Breitbart], we were super shocked," Sleeping Giants said in an interview. "There was just a lot of sexism and xenophobia and racism and things that we were pretty shocked to see couched as news."

What Sleeping Giants wants is for Breitbart to suffer — and they've got a strategy: calling out the companies and businesses that advertise on Breitbart and getting them to pull their ads from the site — thus causing Breitbart to lose money.

"We thought: If we can make this a nonprofitable venture, then they're going to have a harder time spreading the word," Sleeping Giants said. To do this, they turned not to the site's content, but to those who were supporting it.

"Who are the companies who are putting money into this?" Sleeping Giants asked themselves. "When we went on, we were shocked. The first company that we saw was a progressive company advertising and supporting this site that is fairly bigoted. So we quickly set up this Twitter handle and tweeted the screenshot of the ads next to one of the articles and tweeted it to the company, and the CEO got back in like half an hour and said, 'I have no idea and I'll deal with it right now.' That's when we knew this could be good."

Since mid-November, when Sleeping Giants launched, here's how it's worked: Sleeping Giants' Twitter and Facebook page followers — which, combined, amount to nearly 100,000 followers — check Breitbart.com regularly in search of ads. Once they spot one — like the Amazon ad above — they share a screenshot of that ad, tag the company responsible for it and ask why they continue to advertise on a website like Breitbart.

The thinking here is that, although Amazon might not see one tweet asking them about these Breitbart ads, hundreds of tweets would certainly grab their attention.

Surprisingly, a lot of these companies don't actually know. According to SG, a lot of these companies buy ad packages for a certain demographic and interest set, like "politics" or "travel" or "fishing." Then, the ads are spread across the internet according to those tags. So if a page on Breitbart is tagged with "politics," then there's a chance that the ads could be posted there without the anyone at the company realizing it.

So far, more than 1,400 companies have confirmed to SG and their followers that they have blocked Breitbart from their ad packages, and there's been a near-constant stream of people asking more companies to do the same on Twitter and Facebook.

According to SG, part of their success is because people are looking right now for new grassroots ways to change the world — and quickly. That's what's benefitted #GrabYourWallet, too.

"Right now, people are engaged and ultimately if the government and communities can't stand up for the people who need to be defended, then companies have the power to do that," SG said. "As far as we're concerned, there's an instant gratification in tweeting at a company and have that company say 'You know what? You're right and we're gonna do something about it.'"

"As far as we're concerned, there's an instant gratification in tweeting at a company and have that company say 'You know what? You're right and we're gonna do something about it.'"  —Sleeping Giants

The campaign has been so successful that SG really doesn't have to do much work. Their followers are mostly leading the campaign themselves, with the only real leadership on SG's part being the anonymous group of people that keep the list of businesses that have dropped Breitbart up-to-date and retweeting their followers' tweets on the SG account.

Anonymity is important to the SG team. They're so elusive, in fact, that for this interview, one of its founders called from an unknown number and would only say that there are "several" people working on the campaign right now. The organizers have chosen to remain anonymous because they work in digital marketing, and as such they don't want others to think that they're running Sleeping Giants for profit or political gain.

Because, according to SG, this isn't about politics at all. It's about bigotry, and trying to halt it.

"There's been a lot of talk that this is politically motivated, and I guess it's pretty hard to separate it from politics, but we just don't think it needs to be about politics," SG said. "It's about bigotry. We don't think bigotry is a right or left issue. There are all kinds of people in this country, and right and left are as far apart as they've ever been, but bigotry shouldn't be acceptable to anyone anywhere."

At this point, SG's founders know they've made progress, but also see the work ahead of them as well. After all, there are plenty of toxic websites besides just Breitbart out there

"Hopefully, right now, it's as bad as it's going to be at this very moment," SG said. "But we'd like to be able to influence how media businesses operate and we'd love to have sort of this responsibility angle and public consciousness about ad buys. Right now it is one site and it's been a whole lot of work and at times you can't even imagine doing more, but we know we can't stop now."