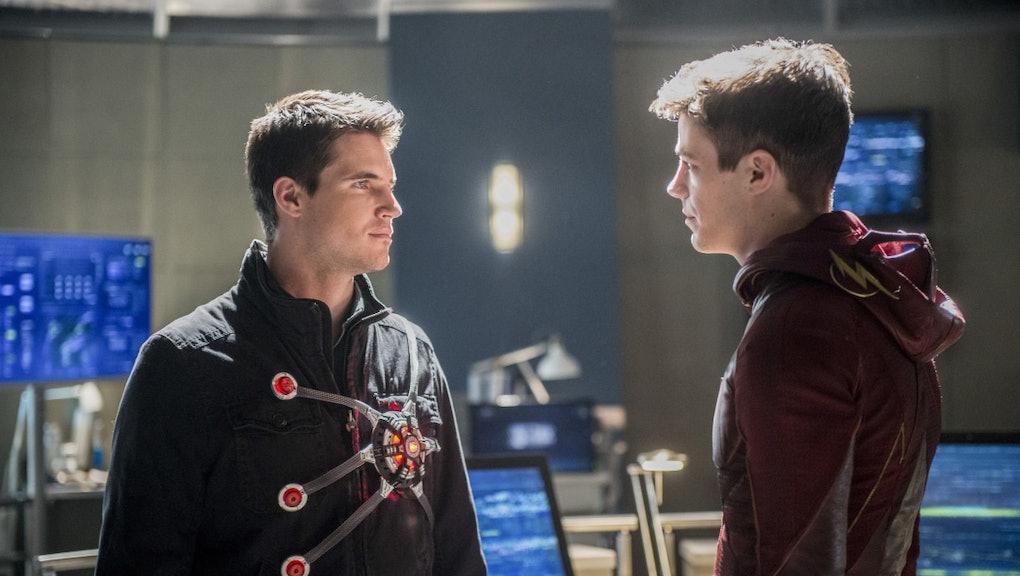 ‘The Flash’ Season 3 Episode 16 Recap: 3 dead friends, a breakup and a baby

When a friend goes missing, Barry Allen springs into action. Wally is trapped inside the speed force and Barry is going to get him out — no matter what it takes. Meanwhile, Jessie and the gang back on Earth are trying to figure out how they can use their shard of Savitar's armor. But Iris is trying to figure out a problem of her own: her relationship with Barry.

Last week on The Flash, Savitar trapped Wally in the speed force, the same prison that future Barry created for Savitar. Savitar called it "a fate worse than death," and in episode 16, "Into the Speed Force," we see that Wally is reliving the moment of his mother's death over and over. Safe to say that yes, it's a fate worse than death.

But that's just one horror the speed force presents. During his trip to save Wally, the speed force talks to Barry in the from of three ghosts from his past. It's like he's some lightning-fast Ebenezer Scrooge. First the speed force comes to him as Eddie, Iris' fiancé who sacrificed himself in the season one finale. Through Eddie, the speed force says it's angry with Barry for lying about coming to terms with his mother's death. Eddie then makes Barry outrun a speed force ghost.

In the speed force's next challenge, Barry is in STAR Labs and sees Caitlyn holding a baby. It's the baby she could have had. The speed force then reveals itself as Ronnie, Caitlyn's dead husband. The speed force, speaking through Ronnie, tells Barry to leave, but Barry refuses. The speed force then sics a ghostly version of Zoom on Barry. The two fight and Zoom pins Barry to the floor. Barry at this point admits that he never should have asked Wally to save Iris. Barry takes the crest off his chest (it's been powered up to tether him to Earth) and slams it into Zoom. This kills Zoom, but it traps Barry in the speed force.

Barry then finds himself in a hospital. He sees Wally crying over a hospital bed, but is interrupted by another dead person from his past — Captain Cold aka Leonard Snart. Barry wants to take Wally's place but the speed force, speaking through Snart, doesn't trust him. Snart is about to blast Barry with his cold gun when Jay Garrick, Earth-3 Flash, comes to the rescue.

In the ultimate sacrifice, Jay offers to take Wally's place in the speed force prison — if it means Barry can stop Savitar. Barry and Wally are then able to escape back to Earth. Barry now knows that he and he alone must stop Savitar and save Iris. Wally is going to have to take a break for a while.

While all of this is going on, Jessie and the gang are trying to crack the piece of Savitar's armor they were able to recover after he attacked Barry. They realize that it's a connected piece of the whole and that they can use it to track Savitar. Jessie Quick lives up to her name and jumps at the chance to face off with Savitar, but HR shoots her down. Jessie goes out to find Savitar anyway and it works. Jessie and Savitar battle briefly and with the help of HR in her ear, Jessie stabs Savitar with his own armor, forcing him to flee. They learn that Savitar is mortal and can be hurt.

Unfortunately, this was the last big hurrah for Jessie on Earth-1, at least for now. With Jay trapped in the speed force, Jessie volunteers to leave Wally and Earth-1 so she can protect Earth-3. Wally and Jessie say "I love you" and she's on her way through the multiverse.

Iris too is facing a breakup. While Barry is off saving Wally, she continues to wonder about their engagement. Joe tells her to follow what's in that big beautiful heart of hers. When Barry returns, she vows that she just wants to be his wife. But Barry has to come clean, explaining that he proposed because he thought it would save her and that he was wrong. He says he will save her but not by changing the future, instead by "embracing it." When Iris asks what that means, Barry says they need some space for a while.

Space seems to be coming, as next week looks like a departure from our main storyline. Barry teams up with Supergirl to face off against the Music Meister in a musical crossover episode.