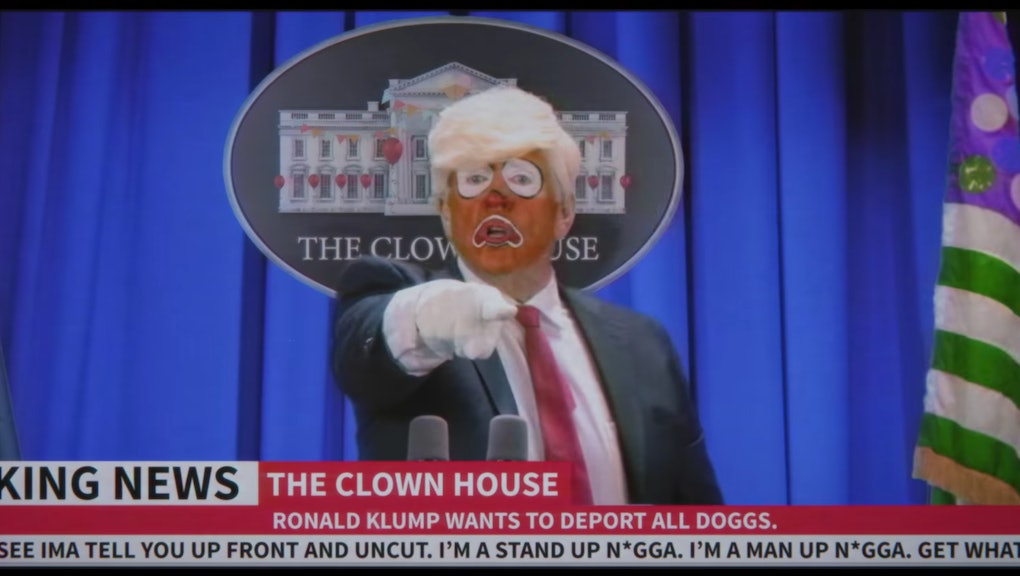 For perhaps the first time in history, a sitting president has used his wide public forum to comment on a Snoop Dogg music video.

In the wake of his 2005 tax revelations, President Donald Trump decided to turn the eyes of his 26 million followers away from that drama and towards an easier target: Snoop Dogg's performance in the music video for BadBadNotGood's remix of Kaytranada's "Lavender," in which the West Coast rapper aims a gag gun at a clown version of Trump and pulls the trigger.

Trump asked the world to imagine this scene playing out during President Barack Obama's administration. If Snoop Dogg had been aiming and fired his "Bang" flag-shooting gun at Obama, the outcry would have been so great it would've resulted in jail time, Trump claimed.

It's unclear what evidence Trump is referring to back up this claim. Obama weathered his fair share of death threats from high profile musicians.

In a 2007, Ted Nugent called Obama "a piece of shit" and "told him to suck on my machine gun." Then in 2012, he vowed that "If Barack Obama becomes the president in November, again, I will be either be dead or in jail by this time next year." That comment did prompt a Secret Service investigation, but no arrest.

In 2014, Creed's Scott Stapp threatened President Obama after claiming he was a CIA agent tasked with carrying out his assassination. It prompted another Secret Service investigation, but no jail time.

"Snoop shouldn't have done that," the Florida senator told TMZ, according to the Associated Press. "We've had presidents assassinated before in this country, so anything like that is something people should really careful about."

"[If the] wrong person sees that and gets the wrong idea, you could have a real problem."

Ted Cruz also told TMZ it's "in poor taste to be making fun of murdering someone, and in particular assassinating the president."

Even some of Snoop's long-time allies were a bit nervous seeing Snoop's shot. Ice-T seemed to agree with Trump that watching an artist shoot at Obama would be harder to stomach.

"I think it'd be terrible, but Obama wasn't the same kind of guy as Trump," he told TMZ. "It was very hard to make an Obama joke because of his race, and Obama was such a smooth character. I think Trump brings a lot of these jokes onto himself."