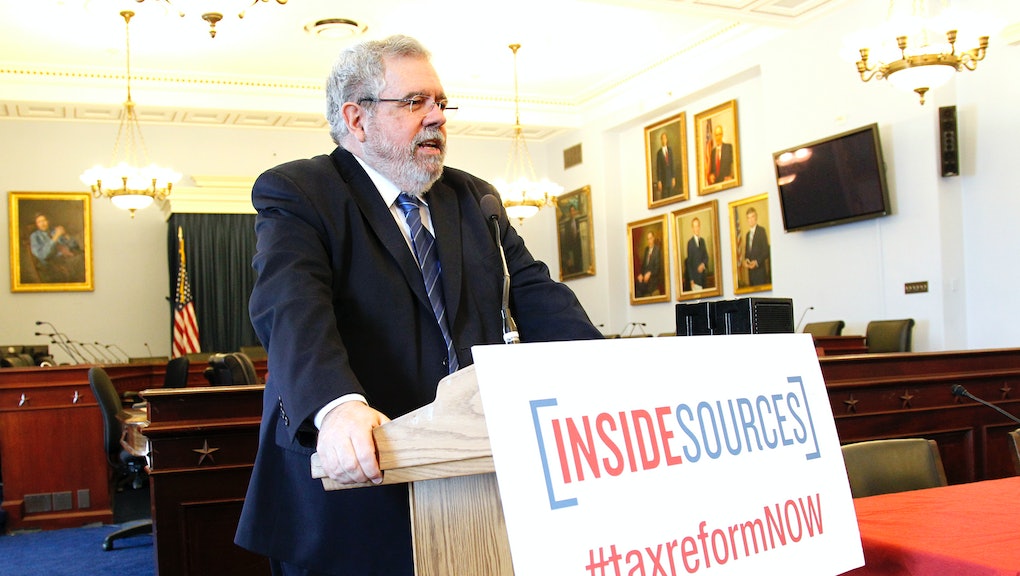 Who is David Cay Johnston, the journalist who surfaced Trump's 2005 tax returns?

David Cay Johnston – who appeared on The Rachel Maddow Show Tuesday night to discuss President Donald Trump's 2005 tax returns — has had an illustrious career as an investigative journalist.

The morning after Maddow, Trump called Johnston a reporter "who nobody ever heard of" and, in classic Trump form, called Johnston's discovery of Trump's returns in his mailbox "FAKE NEWS!"

But Johnston is very well known — and has covered Trump since the 1980s. The president has reportedly even called and spoken with Johnston a few times. According to an interview Johnston gave with Democracy Now! in September, Trump has had Johnston's "home number for years." Johnston even claimed in the interview that Trump personally threatened to sue Johnston over his upcoming book The Making of Donald Trump "if I don't like what you're writing."

Johnston is a Pulitzer-award winning journalist

In 2001, Johnston received the Pulitzer Prize in beat reporting for "his penetrating and enterprising reporting that exposed loopholes and inequities in the U.S. tax code, which was instrumental in bringing about reforms," according to his Pulitzer winner profile. Johnston was also a finalist for a Pulitzer in 2003 and 2000 in beat reporting. In 2003, he won an Investigative Reporters and Editors medal for his book Perfectly Legal: The Covert Campaign to Rig our Tax System to Benefit the Super Rich — And Cheat Everybody Else.

According to his author profile on The Daily Beast, Johnston's reporting on tax issues that earned him a Pulitzer "prompted tax policy changes by Presidents Clinton and George W. Bush that Congress valued at more than $250 billion."

Johnston was at the forefront of the 2016 presidential campaign

While much of the media's focus during the campaign stayed on scandals surrounding the Democratic National Committee and Trump's chaotic rise to power, Johnston found a new angle to focus on: Why hadn't Bernie Sanders released his tax returns during the 2016 presidential campaign?

According to a piece Johnston wrote for the National Memo, Jane Sanders claimed in an interview on With All Due Respect that she and her husband had released their tax returns during "every election," an answer to a question that Johnston prompted after he began asking the Sanders' for their tax records. Johnston notes in his piece: "My diligent reporting has failed to turn up any indication that her statement is true."

During her With All Due Respect interview, Jane Sanders suggested their taxes were being sought after by the Clinton campaign, when it was in fact Johnston, who reportedly had identified himself to the Sanders as a journalist.

Johnston unsuccessfully endeavored to find proof that the Sanders' released their tax returns during every election. In his Memo piece, Johnston states:

Except for one reporter who said he had a vague recollection that perhaps, some years ago, he may have seen a partial Sanders tax return, nothing I learned lends any credence to what Jane Sanders claimed.

Johnston said on Twitter that the Sanders' murkiness surrounding their taxes suggested "reasons to suspect bank fraud by [his] wife."

Johnston's efforts, however, failed to materialize: Almost as soon as he put pressure on the Sanders', Hillary Clinton pulled far enough ahead in the primaries to make Bernie Sanders' campaign increasingly obsolete.

He started working in journalism at the age of 18

During Tuesday's Rachel Maddow Show, Johnston mentioned that he's been doing journalism "for 50 years." Indeed, Johnston, who is 68 years old, started out in journalism exactly 50 years ago: According to his website, Johnston began working for the San Jose Mercury when he was just 18 years old. From there, Johnston wrote for the Detroit Free Press, Los Angeles Times, the Philadelphia Inquirer and the New York Times. It was during his time at the New York Times that Johnston won a Pulitzer.

He has no college degree

Although Johnston's list of accomplishments are massive and his journalism career shows no signs of stopping, Johnston has never obtained a college degree.

As his biography notes, Johnston acquired enough credits for "at least one master's degree," but never actually graduated college and "has only a night high school diploma" because he skipped general education required courses "in favor of upper division and graduate study at seven schools."

But that hasn't stopped Johnston from becoming an expert in his field. Johnston has taught at Syracuse University College of Law, University of California and UCLA Extension and his teachings range from tax policy to journalistic techniques to legal theory.

The site that published Donald Trump's 2005 tax returns just as The Rachel Maddow Show began Tuesday night has only been around since late January, according to tweets posted by Johnston.

According to the site's about page, DC Report aims to "show you how to exercise your Constitutional rights to challenge changes detrimental to your rights and protections" and promises that "we will never tell you what to do, but we will equip you with hard facts so that you can decide." The site crashed Tuesday night after publishing Trump's 2005 tax returns before she revealed them on her show. According to Venture Beat, DCReport put up a banner on the site reading "Please pardon the interruption. We were suddenly too popular" and later linked to a PDF copy of Trump's 2005 tax filings.