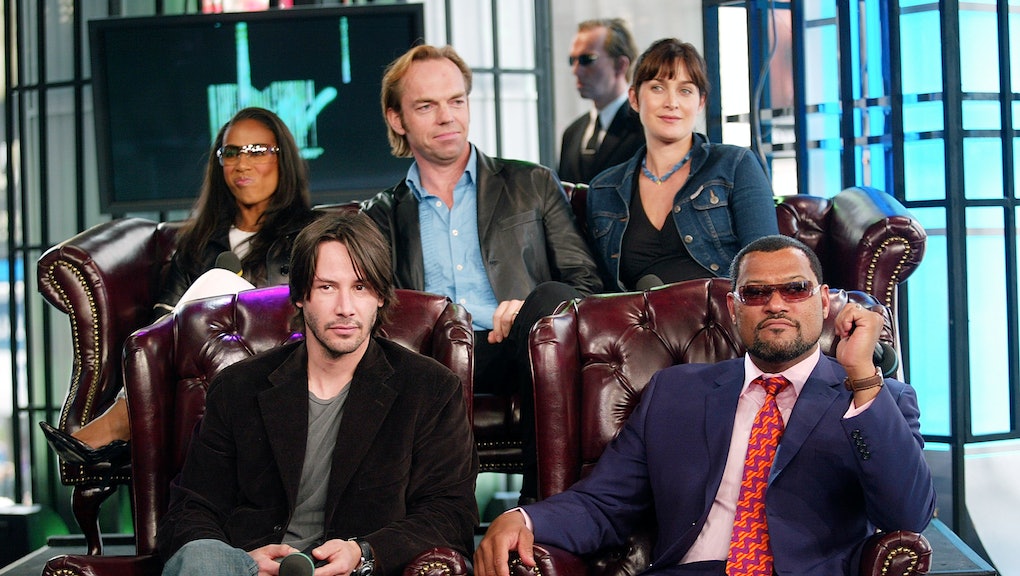 Not that anybody was asking for it, but Warner Bros. is moving forward with a reboot of The Matrix. According to the Hollywood Reporter, which broke the news, the idea behind the revamped franchise would be to explore The Matrix universe in the same guise that Disney has explored Star Wars with films such as Rogue One and the forthcoming Han Solo spinoff. So, to quote The Matrix star himself: "Whoa."

While many people will likely debate the merits of another rebooted franchise, and whether or not The Matrix really needs more films after two critically panned sequels — in short, we really don't — another question comes to mind: What does this mean for Keanu Reeves?

The actor has had a few memorable roles in his career (can we ever forget Stoner Keanu after Bill & Ted's Excellent Adventure?), but The Matrix may still stand as his most iconic. Coincidentally, Reeves was asked back in February by Yahoo Movies about whether he'd ever consider a return to The Matrix, and he offered up a pretty simple explanation: He'd only be on board if the series included the Wachowski siblings, who wrote and directed the original trilogy.

"The Wachowskis would have to be involved," he said. "They would have to write it and direct it. And then we'd see what the story is, but yeah, I dunno, that'd be weird, but why not?"

As the Hollywood Reporter noted, the Wachowskis are not currently involved with the reboot — though that could still change as the studio moves forward with the project. But even if the Wachowskis do ultimately hop on board, Reeves shouldn't feel compelled to join them. Why? It's pretty simple: He's John fucking Wick now.

Reeves' acting career hasn't exactly been revered since The Matrix; he was more associated with Sad Keanu memes than any on-screen work after the critical failures that were Constantine, The Day The Earth Stood Still and 47 Ronin. But along came the little-known John Wick, and with it Reeves' career was revitalized in spectacular fashion.

It was brilliantly simple. Have some Russian goons — led by the dude who plays Theon Greyjoy on Game of Thrones — kill the titular character's puppy, which is unequivocally the most fucked-up thing to present to your audience. But it opens your character up to unleashing savage revenge against anyone associated with Russian Theon, and you'll never think he's taken it too far. It also didn't hurt that Reeves was doing nearly all of his own stunts in a film directed by stunt choreographers.

Reeves also achieved something with the John Wick franchise he was never able to do with The Matrix: He followed up a great first film with an equally impressive sequel. John Wick: Chapter 2 adds more to the mythos of Wick and the mysterious worldwide assassin syndicate he's a part of. It even adds to the anecdote from the first film about Wick murdering people with a pencil by... having him kill two people with a pencil. The whole thing's an avant-garde triumph of pure action.

Granted, it's hard for me to be objective about John Wick: I love the franchise so much I'll probably tattoo "Baba Yaga" on my body at some point in the near future. Still, Reeves has got a good thing going by eschewing the traditional roles that spurned him in the past for a movie that had little to no traction when it was first conceived (it's a minor miracle they got a puppy-killing movie to get the green light). All of this to say: Reeves doesn't need to reprise his role as Neo.

Really, it's best for anyone associated with the original Matrix trilogy to stay away from the reboot, considering the sharp backlash the news already received on Twitter.

Warner Bros., it might be best to take the Blue Pill and forget any of this ever happened.