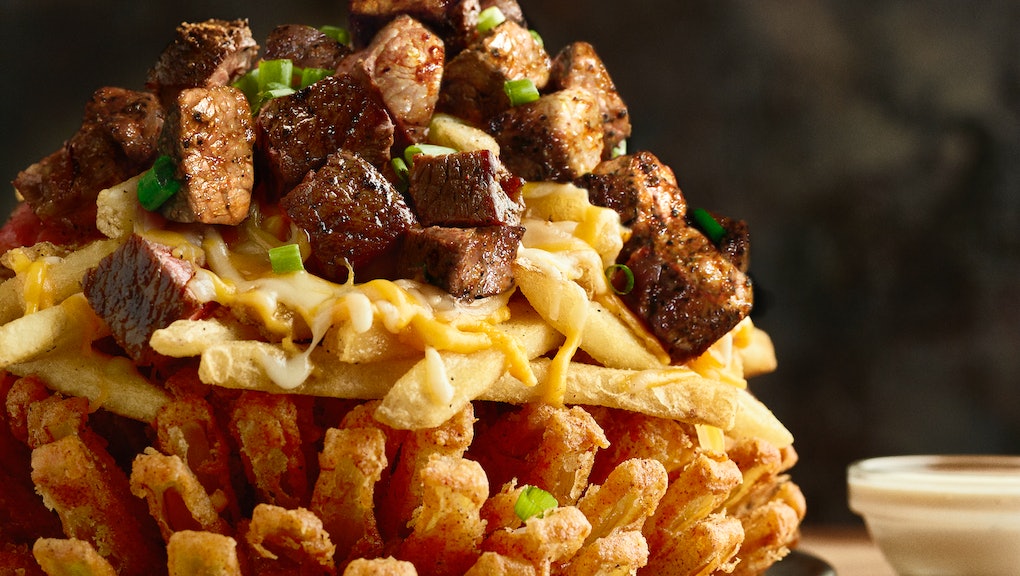 In honor of March Madness, Outback will serve  the "3-Point Bloomin' Onion" through April 4. The dish's name alludes to the fact that the dish is a triple threat: Outback's signature Bloomin' Onion (battered and fried onion cut to look like a flower) is garnished with cheese fries and chunks of sirloin steak.

Feast your eyes on this fried tower, which is either a masterful work of edible art or a terrifying descent into culinary hell:

Make no mistake, "3-Point" does not mean this appetizer is worth three points on Weight Watchers. A regular Bloomin' Onion has 1,954 calories, and the "Loaded" Bloomin' Onion that debuted last June clocked in at 2,360 calories. But this latest onion-based behemoth nets more calories than those already astronomical counts — by a long shot.

The 3-Point Bloomin' Onion contains a whopping 3,080 calories. That's 1.5 times more than the daily recommended amount of calories for a single person, which is 2,000 calories.

"This item is meant for sharing – it's recommended for six or more people," an Outback Steakhouse spokesperson said in an email. Among a party of six, each person would eat 513 calories of the new Bloomin' Onion. But among a party of four, that would be a casual 770 calories each. Since this dish is presented as an appetizer, there will of course be more calories to ingest when the entrée comes out.

Here's how gust-busting the 3-Pointer Bloomer may be

For the 3,080 calories in a 3-Point Bloomin' Onion, you could eat 13 small orders of McDonald's fries, which have 230 calories per order. Thanks to the good human behind the YouTube channel I Count Things, we can estimate that a small order has around 50 fries. Thus, the 3-Point Bloomin' Onion is approximately the caloric equivalent to 650 individual McDonald's fries.

If eating 3,080 calories in one go doesn't cause you trouble down under, your digestive system must be made of pure steel.

You can head to your local Outback Steakhouse to try out the 3-Point Bloomin' Onion for $12.99. Bring some friends, and may the odds be ever in your favor.