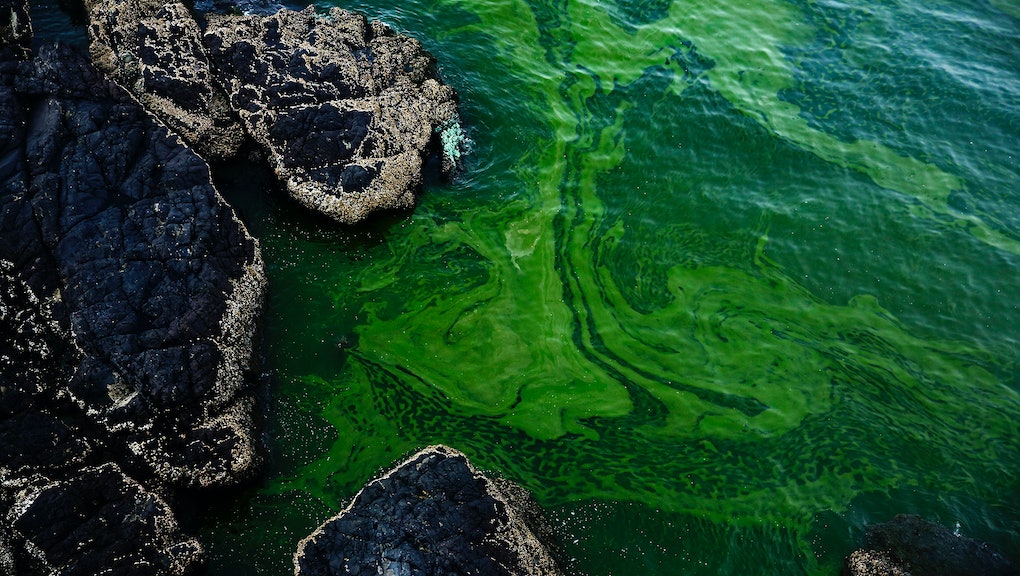 Arabian Sea algae is beautiful, but it spells disaster for our planet

Bright green algae blooms are thriving in the Gulf of Oman — but while they may look beautiful, they're a huge cause for concern.

The gulf, a northern section of the Arabian Sea separating Oman and Iran, becomes bright green twice a year, the Associated Press reported. The color change is due to the rise of the 1.2-billion-year-old microscopic algae species Noctiluca scintillans, which appeared to be invisible just 30 years ago but now form Mexico-sized shapes obvious enough to be picked up in satellite imagery. And each year they continue to grow bigger and last longer than ever before.

One key reason for the algae's rise is climate change. The AP reported that scientists at the Lamont-Doherty Earth Observatory at Columbia University have attributed the algae blooms to melting ice in the Himalayas, which strengthen southwest monsoons in the Indian Ocean that move to the Arabian Sea, churning up oxygen-poor water that has enabled the algae's growth.

Though the algae appears green in the Gulf of Oman, it takes different forms around the world. Algae blooms in Florida appear red, for instance, while the Taiwanese refer to the blooms as "blue tears." The blooms may have a beautiful appearance from a distance — "like a Van Gogh painting," Paula Bontempi, the program manager for ocean carbon and biology projects at NASA, told the AP — but the up-close reality is far less enticing. The green algae has a "guacamole-like" appearance, Bontempi noted, and ammonia secretions in the algae produce a noticeable stench.

More important than its smell is the devastating effect the algae has on the marine ecosystem. The algae "short-circuit" the underwater food chain, observatory biogeochemist Joaquim Goes noted, by displacing the zooplankton at its base. In addition, the thick algae can suffocate fish, and its toxins have poisoned whales, turtles, dolphins, manatees and, in some cases, even humans.

"Normally these things happen slowly, usually we talk about tens of hundreds of years. Here it's happening overnight," Goes told the AP about the destruction of the local marine life. "The transformation is happening before our eyes."

The algae also has a damaging effect on the local human population, as it threatens Oman's fisheries and clogs the pipes of desalination plants that provide 90% of the area's water. Reduced visibility in the water makes it more difficult for divers to repair gas infrastructure underseas.

Scientists are hopeful that spraying fresh water may help to contain the blooms, and Goes and biological oceanographer Helga do Rosario Gomes are hoping to develop an early-warning system for the area based on one used in Florida by the U.S. National Oceanic and Atmospheric Administration. Much damage has already been done, however, and researchers warn that greenhouse gas emissions will likely cause the blooms to spread even further if they're not contained.

"We know that our Earth is changing," Bontempi said. "It may be in a direction we might not like."