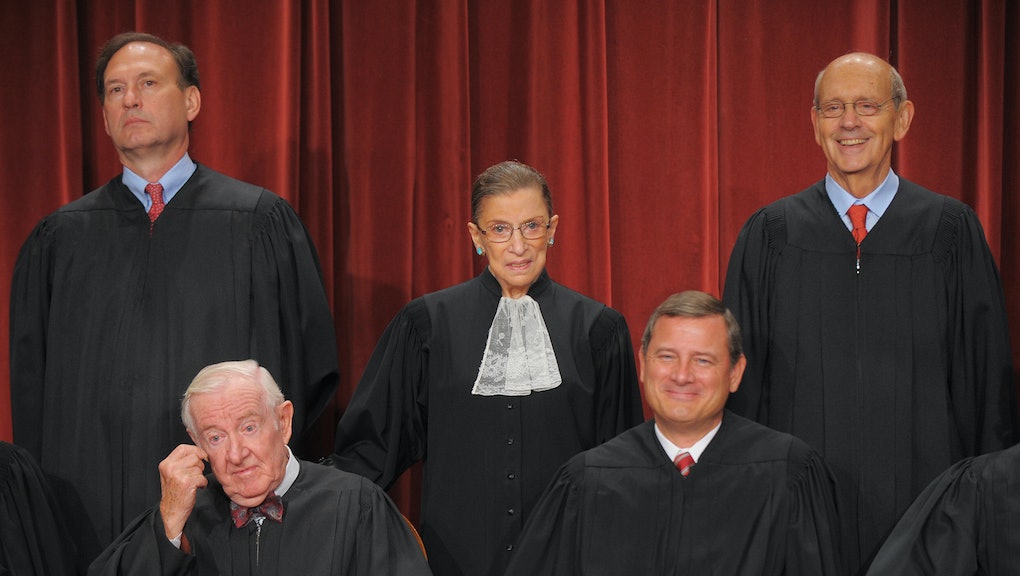 Supreme Court Justice Ruth Bader Ginsburg, the oldest justice on the court, celebrates her 84th birthday Wednesday. The dissent-loving, cancer-beating icon is a lifetime crusader for women's rights who sometimes falls asleep after too much wine — though don't we all? Her no-nonsense commitment to civil rights makes her the most popular Supreme Court justice, and her sharp wit has been expertly satirized by Saturday Night Live's Kate McKinnon.

If you didn't love her before, here are eight facts about the Notorious RBG that will send you head over heels.

Ginsburg's blistering dissents are legendary. In 2013, the Notorious RBG Tumblr account launched to honor Ginsburg "in all her glory," quoting her opinions on Supreme Court cases through the years, though the nickname didn't go viral until a year later.

In 2014, the Supreme Court heard a case brought by Hobby Lobby over an Affordable Care Act  mandate requiring employers to provide contraceptive coverage. The court ultimately ruled in Hobby Lobby's favor, but Ginsberg's 35-page dissent stole the show and cemented her "Notorious RBG" monicker into the annals of internet meme history.

During a July 2014 interview with Katie Couric, Ginsburg said the website that spawned her alter ego was "a wonderful thing."

2. Ginsburg nods off whenever she wants.

According to USA Today, Ginsburg went to dinner with fellow justices before the address. Though she had sworn to only drink sparkling water, she said "the dinner was so delicious, it needed wine." Guess it's a good thing she didn't swear under oath.

3. Ginsburg helped publish a cookbook in her late husband's honor.

Before his 2010 death from complications of metastatic cancer, Martin "Marty" Ginsburg was a prominent tax attorney and law professor. But he was also "one of the nation's most innovative and accomplished amateur chefs," according to NPR.

The day after his memorial service, Martha-Ann Alito, wife of Justice Samuel Alito, suddenly had an idea for putting together a cookbook of Marty Ginsburg's recipes.

The cookbook, Chef Supreme: Martin Ginsburg, is available online and at the Supreme Court gift shop. The longest recipe, French baguettes, covers a whopping four pages. The extreme length of the recipe, Ruth Bader Ginsburg said, was because her husband "didn't want to leave out a single step, so that the person who uses it won't have to go through the process that he went through to perfect it."

4. Ginsburg is a two-time cancer survivor.

In 1999, Ginsburg was diagnosed with colon cancer and reportedly didn't miss a day of work during her hospitalization, according to the New York Times.

Ginsburg was later diagnosed with pancreatic cancer in 2009 and, once again, came out swinging. According to a Fox News article, Ginsburg became lightheaded at work a few months after treatment and spent the night in the hospital as a precaution. Ginsburg was reportedly suffering from anemia, a common side effect of chemotherapy, but was released from the hospital the following morning. The court released a statement saying she "would be at her desk by the afternoon," and sure enough, she was.

Ginsburg and then-Justice Sandra Day O'Connor came up with an idea to use jabots to stand out from the traditional black robes the justices wear.

"You know, the standard robe is made for a man because it has a place for the shirt to show, and the tie," Ginsburg told the Washington Post in 2009. "So Sandra Day O'Connor and I thought it would be appropriate if we included as part of our robe something typical of a woman. So I have many, many collars."

During her 2014 interview with Couric, Ginsburg said she had a specific collar for wearing during dissents because it "looks fitting." She donned the collar when the court ruled in the Hobby Lobby case as well as the day after the 2016 presidential election, despite the fact the court had no opinions to read. Some interpreted the move as a sign of disagreement with the election's outcome.

Meanwhile, Ginsburg's majority-opinion collar features a gold-chain trim and charms and was a gift from her law clerks.

According to the ACLU, Ginsburg saw openings within the Constitution that could help advance women and capitalized on them by cofounding the Women's Rights Project in 1972.

The ACLU said Ginsburg believed the group would lend "credibility" to women's rights issues. Between 1969 and 1980 — the year Ginsburg was first appointed to a federal bench — the ACLU reportedly took part in 66% of the Supreme Court's gender discrimination cases.

According to the ACLU website, Ginsburg's work helped to establish "the foundation for the current legal prohibitions against sex discrimination ... and helped lay the groundwork for future women's rights advocacy."

According to a 2015 biography on the Supreme Court justice, Ginsburg's dissents aren't the only thing she's notorious for. Her workout regimen is intense.

Ginsburg reportedly started the brutal daily workout on the advice of her personal trainer, Bryant Johnson, who told her it would "stop you from having to have a nurse 24/7," according to an excerpt from her biography. Ben Schreckinger, a self-described "young and reasonably fit" Politico reporter, attempted to complete Ginsburg's workout in February. He wrote that it "nearly broke" him, adding "I can confirm she could not be in better hands."

8. Ginsburg's "Advice for Living" will make you feel like you can do anything.

In October, Ginsburg penned an op-ed for the New York Times chronicling her life's challenges and the successes that followed, mirroring her concerns and hope for the country's future.

Ginsburg's advice was a culmination of advice she received from others. On her wedding day, for example, her mother-in-law told her "In every good marriage ... it helps sometimes to be a little deaf," advice Ginsburg said also came in handy with her work on the Supreme Court.