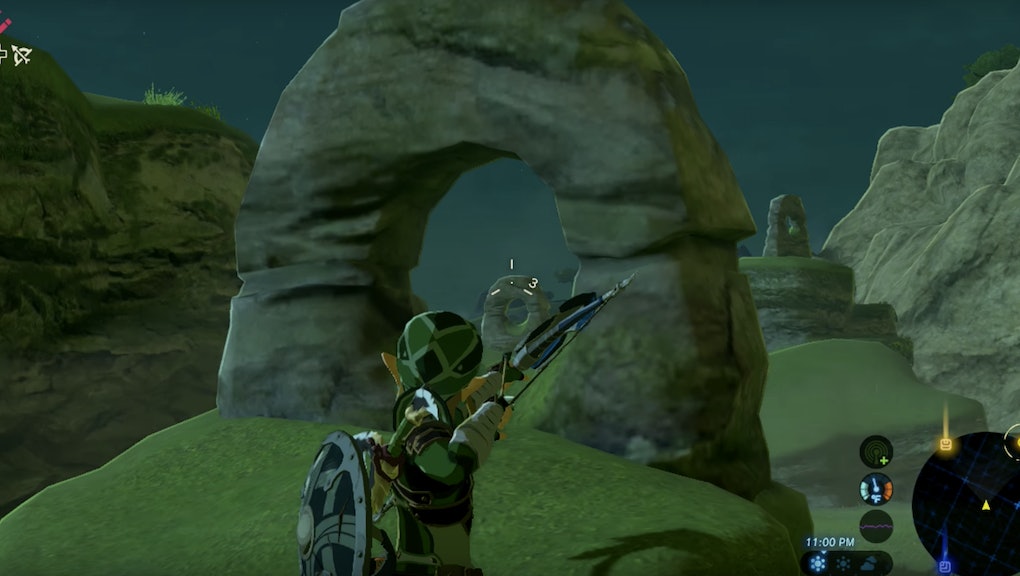 'Zelda: Breath of the Wild' "Two Rings" Sheem Dagoze Shrine Guide: How to solve the quest

The Legend of Zelda: Breath of the Wild has approximately 120 shrines in total. You'll complete four in the beginning of the game at Great Plateau, and plenty more as you make your way through the rest of Hyrule. However, some shrines can be a little harder to find, including the Sheem Dagoze Shrine. Here's how to solve the Two Rings quest in Breath of the Wild and access this hidden shrine.

To unlock the Sheem Dagoze shrine, you'll first want to talk to Kass. The easiest way to do this, according to Gosu Noob, is to teleport to the Central Hyrule Tower (near Hyrule Castle), though we made it there a bit quicker using Ridgeland Tower. From Central Hyrule Tower, head northwest and look for the Jeddo Bridge and head north. You should be at the arrow in the image below.

Once you find Kass, the bird with the accordion, he will offer up a clue: "When a single arrow threads two rings, the shrine will rise like birds on wings."

After hearing his riddle and accepting the side quest, head west. Keep going due west and you'll eventually see the ring rock formations above. Check the map below to see the exact location where you should stand.

Your goal is to shoot a single arrow so it passes through both rings. It may take a few attempts to get the angle right, but here's what it should like like:

When you eventually do shoot a single arrow through both rings, a shrine will rise out of the ground.

Head inside and get ready to solve the Sheem Dagoze shrine. You can use this video guide from YouTube user BlackPenguin to solve it and grab a spirit orb.

Find out all there is to know about Zelda: Breath of the Wild, including how to preserve your items, how to beat bosses like the Stone Talus and Lynel, the best recipes for Link and how to take on the game's shrines. You can also learn what went into making Breath of the Wild. You'll also want to find out where all the great fairies are in the game and how to use amiibo with your version of Zelda.