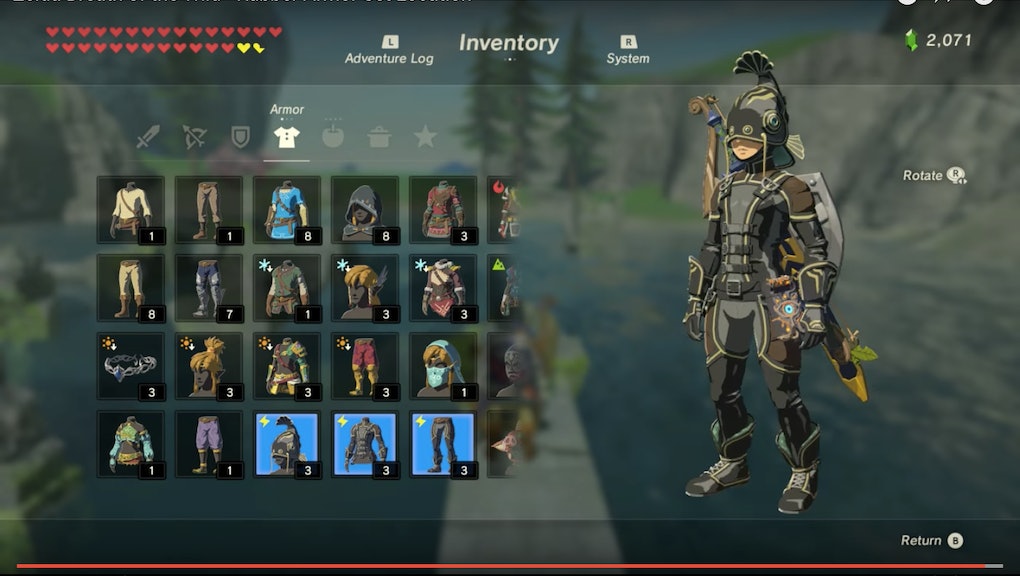 'Zelda: Breath of the Wild' Rubber Armor: How to get the shock-resistant gear

As far as we're concerned, you can never have too many outfits in Legend of Zelda: Breath of the Wild. However, if you're looking to avoid getting blasted by electricity damage and don't want to pony up for the Desert Voe armor set, we've got just the thing for you: rubber armor.

It doesn't seem like rubber armor would be a good idea in practice, but it's some of the best shock-resistant gear you can get in Breath of the Wild. Here's how to find it.

The chest plate itself is the most involved portion of the rubber armor. To get it, you'll have to unlock the Toh Yasha Shrine in Thundra Plateau to the southeast of Rito Village, according to BeardBear's YouTube channel. Once you get there, you'll start a Shrine Quest called "Trial of Thunder," which involves transporting some glowing orbs to the ruins in the middle of the plateau.

The red and orange orbs aren't actually on the plateau where you need to place them, so what you'll need to do is position them toward the central elevated plateau, then hit them with stasis and begin clobbering them with a heavy weapon. If you hit them enough, they'll rocket off their perches and onto the platform you need. Place all four orbs in their correctly colored receptacles and the shrine will open up.

Once you're inside Toh Yasha Shrine, bomb the destructible blocks in front of where you entered, which will start to reveal a hidden chamber underneath. You'll find the rubber armor stashed in the chest inside the hidden alcove.

The Rubber Tights are hidden in the East Necluda region of the game, in the Qukah Nata Shrine on the north shore of Calora Lake. To open the shrine, you'll need to use the area's lightning strikes to break open a large rock sitting on an elevated platform to the south. You can try dropping a metal weapon by the rock to attract lighting before making a run for it. You could also face the lightning head-on; you should be fine as long as you have more than 10 hearts.

Thankfully, Qukah Nata is a blessing shrine. Just march right in and find the rubber tights in a chest directly before the shrine's monk. It's the least the game could do for you after making you risk a lightning blast just to get inside.

The final piece of the rubber armor set, the helm, is received as a reward for completing the "Thunder Magnet" quest at the Lakeside Stable in the game's Faron region.

It's a really easy quest, especially after the last two pieces. Cima, who you'll find near the back of the stable on the righthand side, wants to know why lighting strikes the stables so often.

The solution may not be super intuitive to begin with, but if you climb up the stables and onto the deeply horrible-looking simulacrum of a horse's head they insist on placing atop of them, you'll find a Woodcutter's Axe embedded in the wooden horse noggin. Grab the axe (sweet, free axe!) and talk to Cima, who will give you the rubber helm as thanks for helping out.

When equipped, the rubber armor set gives you shock resistance, which is great if you haven't yet taken on Vah Naboris in the Gerudo Desert. Aside from that, it gives you a sleek, vulcanized profile that drives the ladies — and gentlemen — crazy. Also, it looks like you're wearing a catfish on your head. What's not to love?