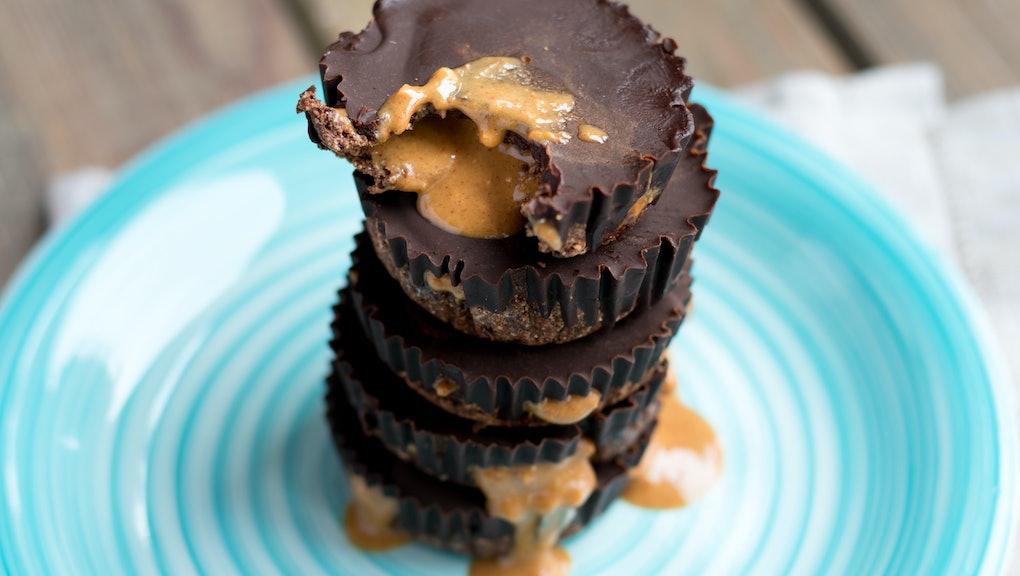 Raise your hand if you've ever wolfed down several mini chocolate peanut butter cups in a drug-like trance. One bite and you're smitten — the chocolate hits your taste buds and your brain's pleasure centers light up like a Christmas tree. You can't stop yourself from eating more and more peanut butter cups to make the feeling last a little longer.

All of this made us wonder — why do chocolate and peanut butter taste so dang heavenly when mixed together? Here's what we found out.

Here's why you're obsessed with chocolate and peanut butter

The pleasing taste of biting into a Reese's Peanut Butter Cup is partially thanks to a phenomenon called "dynamic sensory contrast," Gregory Ziegler, a Penn State University professor of food science who studies chocolate, said in a phone interview. Ziegler explained that our taste buds love when foods have contrasting textures.

"The smooth melt of the chocolate and the crunch of the nut pieces" provide a pleasing contrast, Ziegler noted. The sensual sensation sometimes causes us to eat more — so you can thank dynamic sensory contrast the next time you inhale a dozen mini peanut butter cups in one sitting.

Dynamic sensory contrast is also known as the "ice cream effect," Ziegler said. "The idea was, why do people still have room for ice cream [after a huge dinner]?"

Even when people report they are extremely full, they often manage to make room for ice cream because our taste buds crave that sensation — when cold ice cream changes its texture as it hits the warmth of your mouth, Ziegler noted.

Similarly, chocolate also changes texture (by melting) when it's warmed by your mouth, which is why even chocolate without nuts or peanut butter can be irresistible to our taste buds, Ziegler said.

There's more to the seduction

When it comes to the rich, tantalizing taste of chocolate and the sweet, nutty taste of peanut butter, the two are essentially a flavor power couple.

"[Chocolate and peanuts are] complementary because they produce flavor through the Maillard reaction," Ziegler said. "That's the reaction you get whenever you roast nuts, grill steak or bake bread."

The Maillard reaction is the browning that occurs when most types of foods are cooked — a sign of chemical reactions occurring that change the way food tastes and smells, Food52 noted.

The reactions "produces these flavors that have a unique pull to people," Ziegler said. He added that the salt in the nuts also provides "an attractive contrast" to the sweet chocolate. Salty and sweet — your taste buds know the drill.

The flavor and smell of roasted peanuts are also close to those of roasted cocoa beans, Ziegler noted. In other words, the smell of chocolate and peanut butter is just similar enough to enhance the aroma emitting from the food combo.

In sum, the taste, smell and texture of chocolate and peanut butter make them a triple threat. Which means you should probably eat three peanut butter cups, right? Right.