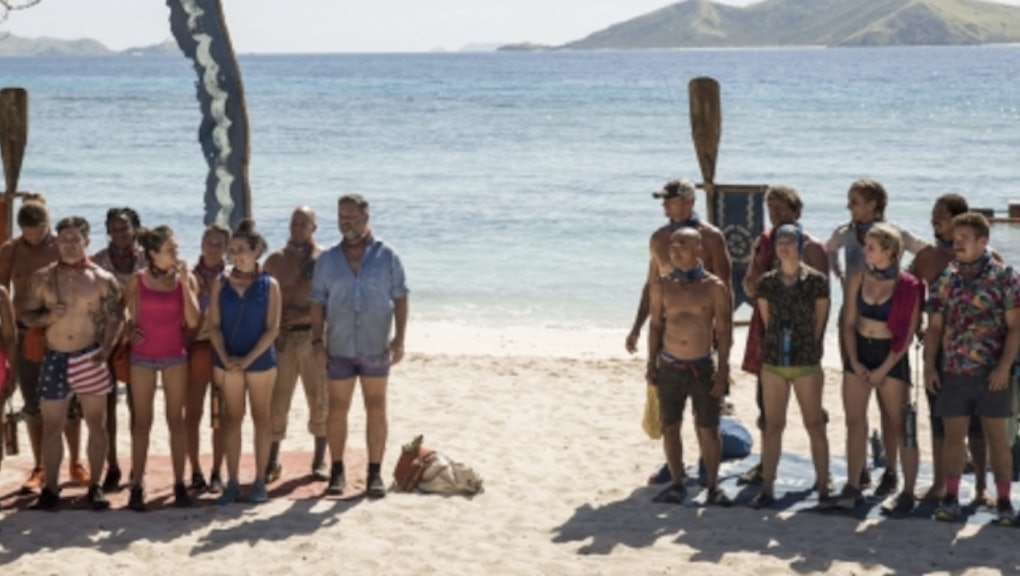 'Survivor' 2017: Who got voted off in episode 2? Hannah Shapiro recaps 'Game Changers.'

Wednesday nights are wonderful, #WhiteRiceWednesday as they are known in the Survivor fandom. I particularly love watching Survivor because I'm no longer the one running around in my underwear on TV. I can't explain the terror of being a Survivor contestant and watching it all back on national television. You know the general gist of what happened but have no idea what bit of your craziness is going to be shown — what two-dimensional you will do and how angry fans will be about it.

We begin this episode with the tribes gathering together. Jeff Probst lets everyone know Tony Vlachos was voted out and people who weren't there react. It's always a shock to find out who has disappeared from the island world when you weren't at tribal. Before the jury comes into play, when people get voted out, it really feels like they disappear.

Probst asks the remaining contestants if they know what will happen next. Zeke knows: A Survivor swap.

Here's the thing about Survivor: So much of it is luck. Survivor is often a numbers game, a game of your allies ending up close to you. That's not to say a great Survivor player can't get out of a pickle or create pathways. But luck, or the "Survivor gods," can still keep you safe or threaten your life in the game.

The tribes are swapped from two to three. The third tribe, Tavua, must rebuild their shelter from scratch. When I played I was on the third tribe after a swap (the one that had "nothing"). It was like moving onto a hell beach — I'll get to that.

New Nuku: J.T. leaves everyone in the ocean

James "J.T." Thomas Jr. ends up on the bottom of the new Nuku tribe. On this tribe of six, the other members were all on Mana together. Realizing he's on the bottom, J.T. decides he must find an idol.

Idols, which grant the tribe member immunity if played correctly before the votes, are a huge advantage in the game. Wanting privacy to look for the idol, J.T rows his tribe into the middle of the ocean ... and then leaves them there. He goes back to camp and searches frantically. While everyone is chilling on the raft in the middle of the ocean, he's working hard to save himself. I'm all like: Dig, boy, dig.

This is an episode of people in predicaments and working to get out of them. That's what a good Survivor player does. There's a myth that only a few people search for idols each season. From my experience, everyone is always on the lookout. I searched high and low for those darn things. I was just really bad at it.

Jeff Varner ends the segment saying it doesn't matter if J.T. looks for the idol because they have the numbers. This just isn't true. An idol can make numbers irrelevant. Babysitting someone on the bottom is never fun. I've been followed by tribe mates worried I was idol searching. But often, it's necessary.

This was a real nice episode for ex-NFL player Brad Culpepper. He really has an eye for island decorating. But Brad isn't just managing the decor on Mana; he's also managing the other players. Brad often claims he doesn't want to be the leader, but maybe that's just his natural state. Sports players like a bit of control. Luckily Brad is handling it well.

The other element of this new tribe that's worth noting is the friendship between Tai Trang and Caleb Reynolds. Again, past relationships come into play with returning players. There is so much to fold into the storytelling on a returning season because the stories of multiple seasons are being told. For some players this is the second, third or even fourth act of their personal journey.

Hali called herself a cobra in episode one. Again, we are treated to a shot of a snake before she speaks. Maybe Cobra will be her rap name once Survivor has wrapped.

Tavua: Say hello to me!

I have to mention something before I can talk about any game stuff. Survivor 34: Game Changers was filmed in Fiji directly after my season, Survivor 33: Millennials Vs. Gen X. The Tavua beach is the same beach (a bit over) as the Millennials beach from my season. I spent 39 days on Survivor. While I took a brief hiatus on a swap beach, I spent at least a month on this very beach; it started to feel like home. I had flashbacks watching this tribe enter my old home.

Tavua only gets fishing gear and a little bit of rice. It was way worse when I swapped to the "nothing" third tribe on my season. I'm talking a beach full of bugs, so many bugs that production wore mosquito nets over their faces. We never slept because bugs would be buzzing in our ears. Oh, and we didn't get fishing gear.

I'm not complaining. I'm just saying, I would have killed for this to be our swapped tribe.

Troy "Troyzan" Robertson is the man on the outs at Tavua. Everyone else is buddy buddy from their old camp. Similar to J.T., Troyzan knows an idol would be his saving grace. I find it hilarious that Troyzan can't even get people to say hello. I remember people would huddle up without me when I hit rock bottom for a few votes. It's both a horrible and liberating place to be. Horrible because you feel desperate and on the outs, and liberating because there's no place to go but up.

The only thing is ... they're not. Troyzan finds an idol clue! He didn't let being excluded get him down, instead he found a window and used it. My favorite part of the whole idol search is when Troyzan reads that it won't take puzzle solving to find the idol and he literally says "thank you."

I remember the goats from my time in Fiji. On my season, the goat hunt was a silly adventure that was more about a bunch of kids fooling around. The goat hunt became a real moral dilemma for the tribe this year.

I can't express the hunger you experience on Survivor. It's not just tummy rumbling. It's a hunger so intense that your brain slows down, the world is less colorful and your emotions run wild. Newer seasons of Survivor tend to gloss over the survival part of the show, but as a past player, finding a way to live is a huge element.

J.T. and Malcolm Freberg are able to catch a baby goat and its mother. Then comes an interesting debate over the morality of killing either a baby goat, its mother or both. The humanity of sparing these goats versus the literal hunger and need for nourishment becomes a camp argument. They have chicken and rice, but goats would be a ton of food.

The discussion of whether or not to kill the goats was one of the most gripping parts of episode two. Not only was the moral dilemma at play, but the politics of the group as well. Clearly, some people (Sandra Diaz-Twine being the loudest voice) wanted to eat the goats. But in a game where the group holds the power to end your time on the show, decisions about how to live are not always up to you. Very often Survivor players fight the urge to get what they want while battling social etiquette.

Ultimately, the tribe doesn't orphan the baby goat and release both of them. With a segment this long, this may not be the last we hear of goat murder.

I love watching people crawl in the dirt, balance on beams with water buckets and sweat it out on a puzzle. Most often, a Survivor tribe challenge comes down to the puzzle.

With the weird immunity helmet, a second immunity and comfort on the line, the tribes battle it out. Mana ends up losing the sports game.

Troyzan celebrates the win and snatches an idol. This is really a great episode for a man who previously was best known for shouting, "This is my island!"

Caleb has a connection to Debbie Wanner and Tai from Kao Rong. In pregame press, many players voiced their fears of the Kao Rong four (the four players who had played together before) having an alliance. This fear of too many people from one season is clear in the discussion of whether to vote Hali or Caleb.

My heart really hurt for Tai this episode. Many will criticize his willingness to turn on his friend Caleb, but building trust and going with the majority is a huge part of the early Survivor game. It was episode two that I voted out a friend as well. While the internet had a bunch of swear words to hurl my way, voting someone out is never an easy decision. It's often painful and comes down to a choice between personal relationships and what is in your best interest.

Hali does a good job of laying out her argument to stay. She isn't just a cobra — she's a cobra with a law degree, y'all.

Ultimately, Caleb is voted out. He kisses Tai on the way out. My friend who I voted out in episode two patted me on the back as she left. Before you criticize, remember that it's much more difficult to be in the situation then it is to sit and watch from your couch at home. Tai proved his loyalty to his new alliance over an old friendship. Will he regret not having a friend later in the game, and even possibly as a jury vote? Only time will tell.

Extra points to the interior decorator, Brad, once again. Brad did what many great Survivor players do. He wanted the vote to go in a certain direction but didn't force it, he let other players believe they were calling the shots. Mind games and camp decorations? A-plus.

Next time on Survivor: Game Changers

Sandra's throne is once again threatened. And two tribes at one tribal? I'm ready for it.

Mic has ongoing Survivor coverage. Be sure to check out Hannah's recap of the Game Changers premiere, as well as details about the filming location for season 34. You can follow our main Survivor hub here.