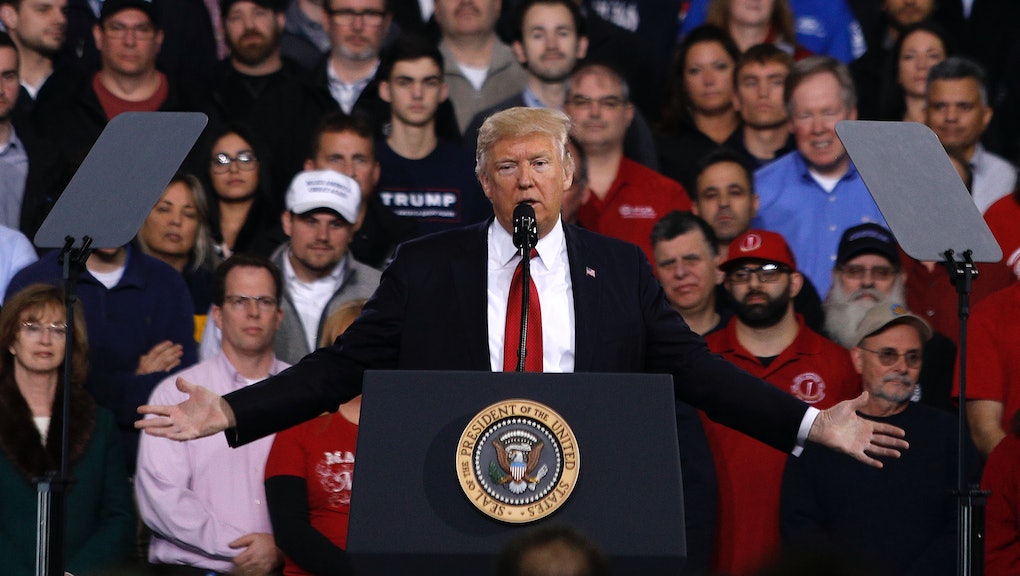 In a Wednesday evening ruling, a federal judge in Hawaii issued a temporary restraining order on President Donald Trump's ban on entry to the United States for nationals from six majority-Muslim countries, preventing the do-over of Trump's initial travel ban — which was also blocked by the courts — from going into effect.

The ruling by U.S. District Judge Derrick Watson was more or less a total rebuke of the Trump administration's rationale for the order. Watson drew heavily from comments from Trump himself, senior administration officials and surrogates made while speaking with the media, citing those statements as evidence the order was intended as a discriminatory measure against Muslims.

Watson also made clear Trump did not significantly revise the old order when he issued the new version, making it subject to prior court restraints on its implementation.

Here's a few passages from the ruling making it clear Trump and his staff's statements supporting the ban were crucial to its undoing.

The crux of Watson's argument was that the long run-up to the travel ban from the campaign on showed a record of the administration wanting to issue the order against Muslims in particular. Because of this record, Watson wrote, an observer "would conclude that the executive order was issued with a purpose to disfavor a particular religion, in spite of its stated, religiously-neutral purpose" — and therefore run up against the constitution's establishment clause, which prevents laws that discriminate on the basis of faith.

The "illogic" of Trump's arguments is "palpable"

Everyone knows that sometimes racists say things like, "Some of my best friends are black." And, likewise, just because Trump's travel ban wasn't directed at all Muslims doesn't mean it wasn't directed at Muslims for being Muslim. "The illogic of the government's contentions is palpable," Watson wrote. "The notion that one can demonstrate animus toward any group of people only by targeting all of them at once is fundamentally flawed."

Watson wrote Trump's executive order was "unique" for its "significant and unrebutted evidence of religious animus" — and specifically cited a March 2016 CNN appearance by Trump.

Trump, Watson noted, had said, "I think Islam hates us." Later, then-candidate Trump gave this response to a question about whether he viewed conflicts with Islamic extremists as a war with the religion of Islam itself: "It's very hard to separate. Because you don't know who's who."

Trump himself said he wanted to target Muslims

As Watson noted, "There is nothing 'veiled' about this press release: 'Donald J. Trump is calling for a total and complete shutdown of Muslims entering the United States.'"

Trump issued the statement in December. Watson essentially argued it was proof Trump's bans were motivated by anti-Islam animus, regardless of the subsequent wording of the orders.

Watson called out former New York City mayor Rudy Giuliani, who took to Fox News to say Trump had summoned him to advise how he could do a Muslim ban "legally," as further evidence the ban was motivated by Islamophobia. "He said, 'Muslim ban,'" Giuliani told the cable network, referring to Trump. "He called me up. He said, 'Put a commission together. Show me the right way to do it legally.'"

Watson more or less mocked the idea that, given Giuliani's comments, there was anything "secret" about Trump's "specific" motivation.

Watson also highlighted a crucial statement by Trump's senior policy adviser Stephen Miller, who said the revised ban was more or less identical in its aims to the old one.

Yet more evidence Trump and his surrogates' words have, predictably, come around to bite them right in the behind.