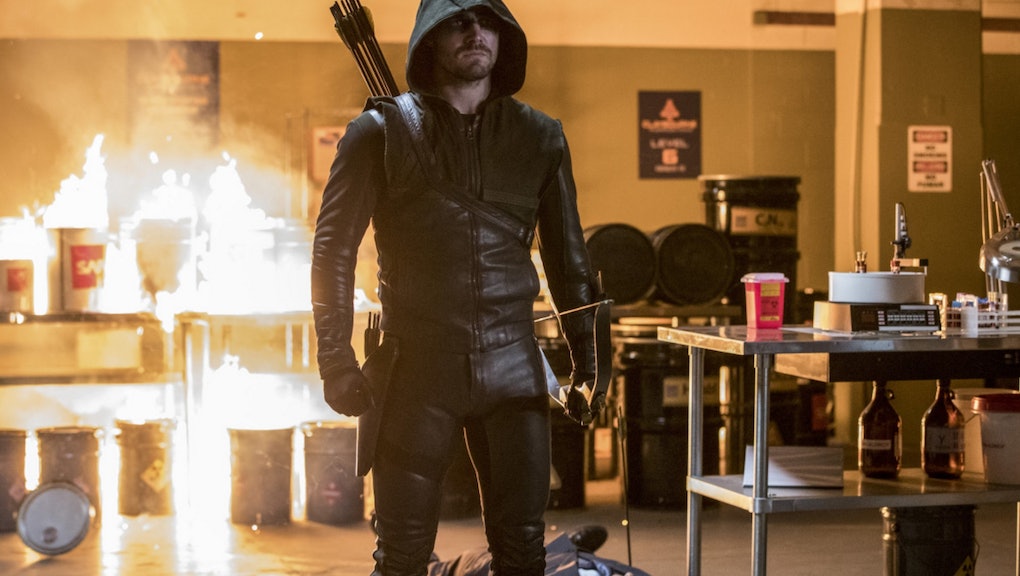 In "Fighting Fire With Fire," we finally learned who was underneath Prometheus' mask — and it was none other than Adrian Chase. In fact, season five, episode 15 was so intense that we were given a week off to let things cool down (that probably wasn't the actual reason). But Arrow has returned with "Checkmate," and let's just say things are heating up again.

In the final moments of episode 15, Adrian Chase — who we earlier learned was Prometheus — kidnapped Oliver's girlfriend, Susan Williams. In episode 16, Oliver learns that the district attorney he has trusted for months has really been playing him all along.

"Checkmate" begins with Oliver seeking out Talia al Ghul, the only person he believes can help him figure out Prometheus' identity. Talia not only reveals that Adrian Chase is Prometheus, but also that she helped train him. Why would she do such a thing? Because Oliver killed her father: Ra's al Ghul.

What does Prometheus want?

After learning that Adrian Chase is Prometheus, Oliver returns to Star City to confront him. Chase isn't hiding. Oliver finds him in a conference room in the mayor's office; taunting him in plain site. Oliver, as the Green Arrow, later confronts Chase in the parking lot, but that is when he learns that Susan has been kidnapped. If he kills Prometheus, she will die from starvation.

Now forced to play Prometheus' sick game, Oliver sends Curtis and Dinah to Chase's mother's house to find some leverage. What they found, though, is a video of Prometheus torturing Susan at an undisclosed location. Meanwhile, Oliver, along with Diggle, heads to Chase's own home to look for Susan. Unfortunately, Prometheus anticipated that move, and while Oliver tries to convince Chase's wife of her husband's villainy, the Star City police department storm in and surrounds the Green Arrow. Of course, he escapes.

Despite continuously being 10 steps behind Chase, Oliver and team finally seem to gain an advantage when Felicity, who has been missing (more on that in a moment), is able to figure out Chase's real name. She also has information that links Chase to Prometheus. Oliver quickly delivers the evidence to Pike, but the police captain is stabbed outside the precinct shortly after. In the hospital, Oliver is enraged to find Chase, still not hiding, standing over the unconscious police captain.

Sensing his rage, Chase essentially begs Oliver to kill him, stating that doing so would mean killing Susan. And Chase appears to hit the nail on the head, telling Oliver that he does not believe he can take another loss in his life. Now is as good a time as any to say that Josh Segarra absolutely killed it as Chase.

What has Felicity been up to?

In the early moments of "Checkmate," Team Arrow is unable to reach Felicity because she is taking a tour of Helix's hacking facility. It turns out that Helix has information-gathering abilities that, according to Felicity, are well superior to those of the government. Felicity is able to use that technology to get the previously discussed information on Chase.

However, when Felicity returns to Helix for help locating Susan Williams' location from the video, she finds her new friends are not quite as accommodating. Before they allow her to use their technology to locate Susan, Helix has Felicity hack into a government border drone and redirect it for an undisclosed purpose. Felicity even tricks Curtis into helping her hack into Homeland Security. Let's just say he isn't thrilled when he finds out.

Felicity has been going through some serious character development the last few episodes, which has seen her go down a much darker path. While she doesn't look to be in the same pain she was in following Detective Malone's death, she appears to be content doing some potentially unsavory things in order to advance her goals. Curtis points this out to her, and even Oliver is able to suspect something is up, though Felicity only tells him that for now he will need to trust her. Am I the only one who feels like things never turn out well when somebody says that?

After hacking Homeland Security's drone for who knows what purpose, Felicity is able to figure out where Chase is holding Susan. Oliver and the rest of his team, sans Diggle, then head to the location to rescue her. Diggle, on the other hand, is sent by Oliver to pick up some much needed leverage over Chase.

Oliver eventually finds Susan tied up in an elevator, but gets trapped with her. Chase was waiting for them. When the elevator doors finally open, Oliver sends Susan away to safety, knowing that Prometheus wants him and him alone.

Sure enough, Oliver finds Chase, dressed in his full Prometheus gear, ready to fight. Before the battle begins, though, Prometheus removes his mask and explains that he now prefers having everything out in the open. And I certainly agree, as Chase, on his own, was incredibly menacing the entire episode. But Oliver does have one trick up his sleeve. Enter John Diggle with the leverage: Adrian Chase's wife.

Chase's wife is stunned to learn that her husband is Prometheus, and he does — for a moment — seem genuinely shocked at her appearance. He may have even been surprised that for the first time the Green Arrow outsmarted him. While embracing his wife, though, he stabs her in the stomach, revealing just how much he wants to bring down Oliver.

The Green Arrow and Prometheus then ditch their weapons and engage in some good old fashioned fisticuffs. For a moment, Oliver seems to get the upper hand, but he's shot in the leg with an arrow ... by Talia al Ghul! The pair then take Oliver to an undisclosed location where Talia asks only that he suffer. And in the final moments of the episode, Chase makes it clear that he has no intention to kill Oliver, but to make him understand who he truly is. While I have no idea what that means, it cannot be good.

I feel pretty confident in saying that "Checkmate" was one of the best episodes of Arrow in recent memory, and it was largely due to Segarra's incredible performance as Adrian Chase. In general, Prometheus has been a compelling villain, though not unlike previous seasons' antagonists. Now that he has been unmasked, and we have learned the true extent of his madness, Prometheus' villainy has been taken to a whole new level.

The flashbacks in "Checkmate" were once again largely forgettable, but at least they contained enough choreographed action that they were a decent reprieve from the main plot's highly psychological nature. While the emphasis in this episode was clearly on Chase and Oliver, there was some added intrigue on the Felicity front.

I am certainly looking forward to seeing what will happen with Felicity as she gets pulled deeper down the Helix rabbit hole. It seems relatively inevitable at this point that she is going to do something the she either regrets, or brings her past a point of no return. What that is, I cannot say, but this quid pro quo relationship with Helix is surely not going to end well.

As we near the final few episodes of Arrow's fifth season, things are really starting to shift into high gear for all our main players. As early as next week, we should get even more insight into Chase's plans for Oliver, and I am absolutely game to see what he has in store.