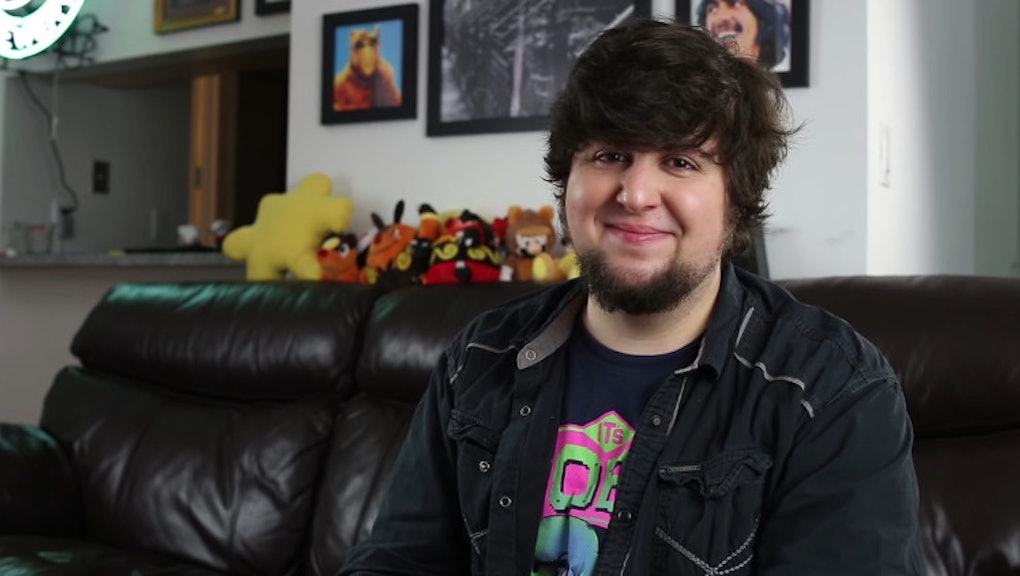 JonTron's Racist Tweets: Everything you need to know about the YouTube gaming scandal

Unless you watch a lot of gaming videos on YouTube, you probably haven't heard of JonTron, the boyish comedy vlogger who's ignited the internet with an extended display of public racism — but you will soon. This is the story of the most hated man on YouTube right now, and how he's part of a cultural shift that's changing the face of the social web as we know it.

Over the last few days, headlines have popped up with the name "JonTron" alongside phrases like "anti-immigration" and "Rep. Steve King." Who is JonTon, and what does he have to do with one of the most racist members of Congress? With everything else that's been going on in the news this week, it's understandable if you missed the story. We're here to help you make sense of the entire situation.

Strap in — it's about to get messy.

Jon "JonTron" Jafari is a popular gaming YouTuber — he boasts 3 million followers — who has been making content since 2010. His videos run the gamut of YouTube randomness: He'll play a bootleg version of Pokémon or produce an animated cover of — wait for it — Katy Perry's "Firework."

More recently, however, JonTron has been getting attention online for a different reason. After Iowa Rep. Steve King received backlash for a xenophobic tweet that essentially called all nonwhite Americans "somebody else's babies," JonTron jumped in with a tweet of his own to defend him.

This tweet seemed to come as a big surprise to many of JonTron's fans because he usually doesn't post anything overtly political. Then he engaged with some people on Twitter, arguing with some of his followers and digging his heels in further.

JonTron's racist tweet was one thing, but his live debate made it so much worse

Then came the real core of the story: JonTron and gaming streamer Steven "Destiny" Bonnell decided to have a live debate about "immigration and assimilation." JonTron expanded on his tweet, offering up some unique perspectives, like how the U.S. don't need immigrants from "incompatible" countries.

JonTron makes a couple other noteworthy points, like saying, "If there is one American in America who doesn't see themselves as strictly American, we have ourselves a problem." In regards to black people coming out of low-income environments, he said, "I don't understand why it is anyone else's responsibility but their own."

This conversation opened up a whole can of worms on the internet. Journalists — both in gaming and outside of it — started writing about JonTron and his debate with Destiny. JonTron's own subreddit has now been locked down due to an influx of critical posts.

Despite all this, many of JonTron's fans still support him

Although he received some criticism from his fans, by the looks of Twitter, it seems like JonTron's followers overwhelmingly support him regardless of some of his swerve into nationalist politics.

Then again, some fans have clearly had enough — and, as Polygon reported, his follower account has decreased by about 10,000 since everything went down.

JonTron just doesn't get it

Coming fairly recently after fellow YouTuber Felix "PewDiePie" Kjellberg's Nazi-joke controversy, JonTron is another very public face in a faction of the gaming community known for its racism, sexism and coordinated harassment.

Many of these YouTubers' fanbases — and in the case of JonTron, the YouTuber himself — have ties to the online spaces and ideologies of the alt-right movement, a loosely connected group of trolls and white nationalists.

JonTron's beliefs, judging from his debate with Destiny, are rooted in a couple of central misconceptions — the first being that significant historical events like Jim Crow or slavery didn't have a lasting impact on coming generations. JonTron fails to grasp how atrocities like Jim Crow and school segregations directly affected issues like the school-to-prison pipeline, economic inequality and housing segregation, as many, many, many smart people have discussed.

JonTron's views on immigration reflect the message coming from President Trump and his chief strategist, Steve Bannon, the former executive chair of the right-wing site Breitbart. In the Destiny debate, JonTron claimed, falsely, that "large swaths of [undocumented immigrants] ... want to break off parts of America [and bring them] back to Mexico." After Destiny pressed him for data or sources for this, he responded, "I know they are doing that."

What's next for JonTron and the YouTube gaming community?

It's hard to say what will come from the JonTron drama. Gaming personalities accused of racism may lose a few followers, but their influence is still immeasurably large, and the consequences they face are relatively insignificant. Though PewDiePie's Nazi jokes caused Disney and YouTube Red to cut ties with him, he will still earn millions in ad revenue.

For JonTron, it's a bit more complicated. His subscriber base is smaller than PewDiePie's, though still substantial, and fans may continue to support him throughout the scandal. He doesn't appear to have any existing contracts with other media companies, so there's no big contract or deal he can lose out on as a result.

Recent incidents of content creators expressing blatant racism, xenophobia and anti-Semitism may also be symptoms of bigger issues in the gaming community. JonTron could be one of the first public faces of a massively popular new alt-right movement on YouTube, opening the door for other personalities with big online followings to broadcast white supremacist ideas and anti-Semitic jokes to young, impressionable viewers — while the rest of the world, unaware of YouTube's influence, barely bats an eye.