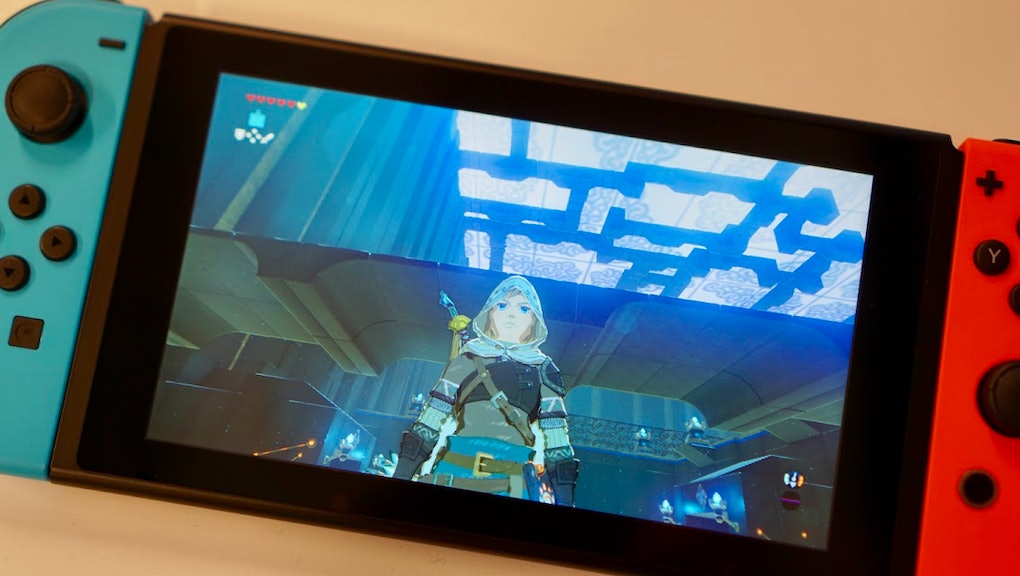 'Zelda: Breath of the Wild' Vah Naboris Walkthrough Guide: How to solve the desert dungeon

If you make your way to the desert in the southwestern portion of the map in The Legend of Zelda: Breath of the Wild, you'll see a sandstorm caused by Vah Naboris, a raging mechanical camel that stands several stories tall. You really can't miss it. It's kind of a thing down there.

Vah Naboris is a divine beast, and one of the game's four main dungeons. After the lengthy quest chain to unlock access to Vah Naboris, you're in for one of the game's more diabolical puzzle sections. Thankfully, I've finished it and VG247 has a guide to fill in the gaps in my memory. Read on for our walkthrough.

First things first, you have to grab the map from a terminal before you can start the dungeon in earnest. Merely kill the small guardian and walk forward until you're in the large, cylindrical chamber that makes up most of Vah Naboris. Walk to the rear section and up a ramp to download the map. Easy.

Unfortunately, the easy part stops here. Now you have to activate five terminals by rotating the forward, middle and rear sections of the cylindrical chamber through four different orientations each. It's pretty intimidating, but that's why you're reading this.

While standing on the ledge outside of the map room, rotate the middle section until a platform with two chests on either side is upright in the middle. Note that, while the platform is upright, the chests are on their sides in this orientation. Stand on the "safe" side of the platform (where you'll be able to stand after rotation) and rotate once. After doing this, run to the middle and find another safe area to rotate again.

Walk to the ledge facing the front part of Naboris and rotate the front portion twice. The first terminal should be in front of you now.

If you look back towards the map room, you should see a hole you can paraglide into on the left. Once you're through the hole, rotate that section twice and you'll see the terminal. Rotate once more to activate it.

Rotate your way out of this room and back into the big chamber. If you look in the direction of the map room, you'll see another ledge above it. Position yourself so you'll be safe as you rotate the rear section enough times to get up there. You'll want to stand on top of the little box the second terminal was in. There's a doorway up here that doesn't rotate with the rest of the dungeon. Step in.

This part stumped me, but if you're observant, you'll notice that the map screen has three lines in the rotating sections. The lines are green when they're all aligned. This is the electrical circuit. Align them all at the top of Naboris to create an electrical current running into the area you now find yourself in.

If you look carefully, you can use magnesis to move the small boxes to create a current running through the lines on the wall. Naboris' tail will raise up when you do this, but you don't need this yet. Instead, leave the blocks in place but break the current by rotating any part of Naboris. Walk out onto the tail and you'll see a small area with an electrical circuit that also serves as a safe area to stand on. Rotate whichever part of Naboris you just rotated back into position to recreate the current and ride the tail as it rises up.

Shoot the eyeball, go forward and shoot another to unlock an elevator. Clear the corruption in the room at the bottom of the elevator shaft and ride up to an area with a treasure chest and an electrified ball. Pick it up and walk towards Naboris' head before setting the ball down next to the object that takes an electrical charge. This will activate a moving platform that will take you to a room with a guardian. Kill it and let the elevator go up without you.

Just below where the elevator sat is an eyeball to shoot, which will clear the corruption and let you activate the next terminal.

Turn around and drop down through the hole below the moving platform. Kill the guardians to open access to the elevator rooms from here. Your goal here is straightforward, as you need to put two electrical balls on the two points. Go get the first one you set down earlier and put it in its place.

The second ball is on top of the camel's "hump" at the front. Get up there with an elevator, grab it and take it down to place it on the other point. Grab the terminal after the door opens.

Head out to the lowest floor in the front outdoor hump section and drop down to a big wheel you can rotate. Rotating this wheel will cause each wheel on the sides to turn, but they'll only turn one at a time. Pushing it one way will rotate one wheel, pushing it the other way will rotate the other.

You just have to rotate them until the lightning bulbs are lined up, which activates an elevator. Ride the elevator up to the fifth and final terminal. Make your way back to the main chamber and hit that main terminal to start the toughest of the four divine beast boss fights in the game.

Lightning is a nightmare in this game because it will cause Link to drop whatever weapon, shield or bow he's holding on contact. Stock up on lightning-resistant gear and food before this fight. Thunderblight Ganon's primary attack at first is a zig-zag dash towards you, followed by a melee swipe. If you dodge at just the right moment, you can initiate a flurry rush to do a lot of damage. Otherwise, either dodge or block this and attack in the small window it gives you. Hitting its shield a few times will stagger it momentarily, too.

Once you've done some damage, it'll fly into the air and drop a bunch of metal spikes into the ground, firing electricity at them to create a highly dangerous current. Move away from these and grab one with your magnesis rune. Slam it into Thunderblight Ganon for big damage. Keep doing this until the next phase.

The third and final phase of the fight is a rehash of the first phase, but its weapon is electrically charged now. Do the same thing you did before while being careful not to get hit and drop your weapons. If your reflexes are good enough, you'll be able to kill it eventually. This fight isn't very fun, but the ability you get from Urbosa for finishing it is extremely worth it.