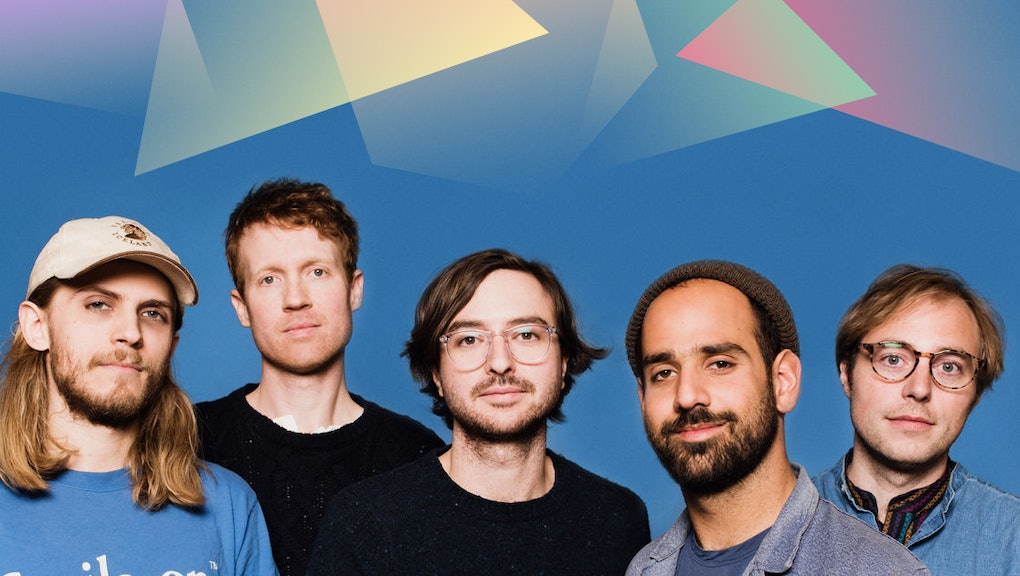 As pop's center has shifted toward dance music and hip-hop, mainstream success has become an increasingly elusive proposition for contemporary rock bands. The exceptions are few and far between. Tame Impala's Kevin Parker took his brand of guitar-driven psychedelia to the dance floor last year, catching the ear of Lady Gaga in the process. Midwestern folk hero and Kanye West muse Justin Vernon warped the human voice to remarkable effect on Bon Iver's 22, A Million. These successes invariably come with deeper bows to electronics and beat-based styles, and there's little reason to believe that trend will reverse in full.

However, there are holdouts working to advance the tradition of guitar-based pop without transmuting it completely — Real Estate chief among them. For the past nine years, the New Jersey band has traced a humble path to the forefront of indie-rock by cultivating a persona built on studied musicianship, meaningful retrospection and an earnest appreciation for songcraft. These values inform their brand of tranquil and nostalgic songwriting, which can conjure up the sort of reverie perfect for a midnight drive or summer escape.

Their latest effort, In Mind, finds the band loosening its grip on some of the sonic conventions that defined their previous work, shifting from the sepia tones that colored most of their earlier music toward more vivid, modern hues. They've tweaked the formula to offer a stronger nod to current trends. Their arrangements are faster, they flaunt the band's skills more openly and sport new production techniques that give the music an exciting urgency. Yet the band never strays too far from their roots, amounting in an album that seems to challenge the notion that guitars can't be cool.

"Since probably the first record, definitely since Atlas, I've been sort of trying to get away from being pegged as a nostalgia thing," Martin Courtney, the band's frontman, said in a recent phone interview. "A lot of these songs are kind of about the past and the present at the same time."

"Two Arrows" charts a path ahead with a sweeping portrait of ditching a small town for something grander. The meditative "Time" finds Courtney auditing his life, anxiously observing the time that's left and questioning if he'll obtain what he's working toward through a dreamlike daze. "If I cannot be careful, I'll forget what I'm here for," he sings, offering a cautious warning. "And if I cannot be patient, I don't think that I'll make it." It's the sort of interior conversation that will ring true for anyone feeling lost in these unsettled times.

"Trump was making his bid in the primaries, and I will say that it was a direct reaction to how that felt," he said. "It's a political song for sure, and I'm glad it made it onto the record, and that there's some comment on how we collectively feel as a band, which is a sense of anxiety and a sense of resistance to some of the policies that the Trump administration is putting into place."

Bleeker said the band plans to make arrangements for contributing proceeds to organizations later on tour, and that they'll continue to use their platform to raise awareness.

It's a rare moment of political engagement but one that doesn't feel out of place on In Mind. It's a nod to some of the soul-searching the band has undergone since Atlas. After the critical acclaim that followed their 2014 album, the founding trio of Courtney, Bleeker and lead guitarist Matt Mondanile took time to roam and record side projects and further explore their distinct musical curiosities. On his meandering solo debut Many Moons, Courtney embellished his meditations with orchestral arrangements and charmed melodies that brought his natural pop sensibilities closer to the fore. Bleeker, fresh off a move to Marin County, California, released Country Agenda, the third outing from his folk side-project Alex Bleeker and the Freaks.

Lead guitarist Matt Mondanile, the maestro behind synth-pop outfit Ducktails, released the group's fifth album St. Catherine in May 2015. The album would mark the beginning of a transition for Real Estate, as Mondanile would later depart the band in early 2016 to focus on Ducktails exclusively.

It was a significant change for a band whose musical persona is largely defined by the quiet homegrown bond of its members and the intangible kinship anchored in part by Mondanile's sinuous guitar leads. To fill the void, Real Estate turned to fellow Ridgewood, New Jersey, native and Atlas collaborator Julian Lynch, an accomplished multi-instrumentalist with a respected solo career of his own. His history with the band traces back to meeting Courtney in elementary school and later playing in bands with him and Bleeker in high school.

Even with this familiarity, Lynch says he was keen on contributing ideas that would strike the right balance between the band's signature sound and the new tricks on In Mind.

"One of my goals I had in trying to fit in with the group was to make the playing a bit more dynamic," he said in a recent phone conversation. "When I was writing the guitar parts out in Beacon[, New York], just like looking to the places where there's a little bit of room in the song, where adding something melodically might work. And then, looking for the places where it might be cool to pull back more."

"A big theme on this record, too, is lyrics a lot about a kind of reluctance, or not being sure if being in a band is such a responsible thing to do as a 31-year-old with two kids." — Martin Courtney

Throughout the record, Lynch's guitar adds an elegant tension: on album standout "White Light," his playing slides in and out of frame, shifting its gears, while the careening solo on "Saturday" guides the cascading jam into a reverb-drenched crush.

With Lynch in tow, the band huddled up in late spring 2016 in Beacon, New York — the quiet upstate enclave where Courtney resides with his wife and two children — to begin work on their follow-up.

"It was really nice for us to kind of like have this break, and then we got back together and we were all really kind of psyched to begin Real Estate again," Courtney said. "That was kind of the vibe that kind of carried through the entire process of making this record, a lot of optimism and feeling a little bit refreshed after taking this break."

After tracking demos, they relocated to Los Angeles in June to record the songs in the studio with producer Cole M.G.N, a former member of Ariel Pink's Haunted Graffiti and sound engineer for Beck. The band brought him on board to help them navigate the studio and implement new techniques without making their sound unrecognizable.

"The real goal for this record was to explore what it'd be like to use the studio as more of an instrument than we had on previous records," Bleeker said. It shows.

The new production flourishes and arrangements expand upon the notion of a Real Estate song should sound like. The slow-waltzing ballad "After the Moon" features a looping reprise at the end, something that Courtney said he always hoped to include on a Real Estate album.

On "Same Sun," Lynch coos a warm falsetto harmony behind Courtney's chorus, imbuing the song with a melodic brightness reminiscent of the Beach Boys' Pet Sounds. Courtney says it reminds him of vintage Fleetwood Mac, passing the credit to their newest member for the idea.

The fruits of the band's experimentation are most fully realized on lead single "Darling," which captures lightning in a bottle with its early time signature change and pulsing dance beats. A late addition to the project, Courtney and drummer Jackson Pollis kicked it around during jam sessions at soundcheck for over a year until it became clear that it was a pop gambit worth exploring.

Bleeker's bass line is infectiously catchy and is one of his finest moments on the record. Perhaps predictably, he was the song's biggest champion, leading the campaign to make it the album's lead single.

"He was just like, throughout the entire process, '"Darling" is the first single we need to put out — I don't even know what we're doing,'" Courtney said. Bleeker was right. It's one of the band's most unique and rich performances, a pure confection that feels like a cosmic synthesis of all five members hurtling through the tube of a giant tidal wave.

In Mind represents a true creative step forward for Real Estate and reveals a band aiming higher and eager to go wherever that path leads them. Four albums in, the record is as much a statement of their growth as musicians as it is their maturation from a group of New Jersey kids who came home from college, started a band, and accomplished more than they ever dreamed of. It provides a snapshot of a group of respected musicians who still possess a collective ambition for something greater. As success and time pull them further from their suburban origins, the band realizes that continuing to function as a tight-knit unit will require more focus and communication.

"A big theme on this record, too, is lyrics a lot about a kind of reluctance, or not being sure if being in a band is such a responsible thing to do as a 31-year-old with two kids," Courtney said. "It would probably make a lot more sense if I just had a normal job. That's kind of a big part of it, I think on this record, is just like, kind of grappling with that, with myself."

Reflection remains a central motif at the heart of Real Estate, and perhaps always will. But as the band enters this next chapter, their hope for the future is fueling a forward push. On "Same Sun," Courtney looks back and forward in time with clear-eyed resolve, singing, "I do not wish to retrace the steps I've taken,/ All that matters now is where I'm going." It's a fitting line that captures so much: everything they've done, with an arrow pointing out the brighter path that lies ahead.