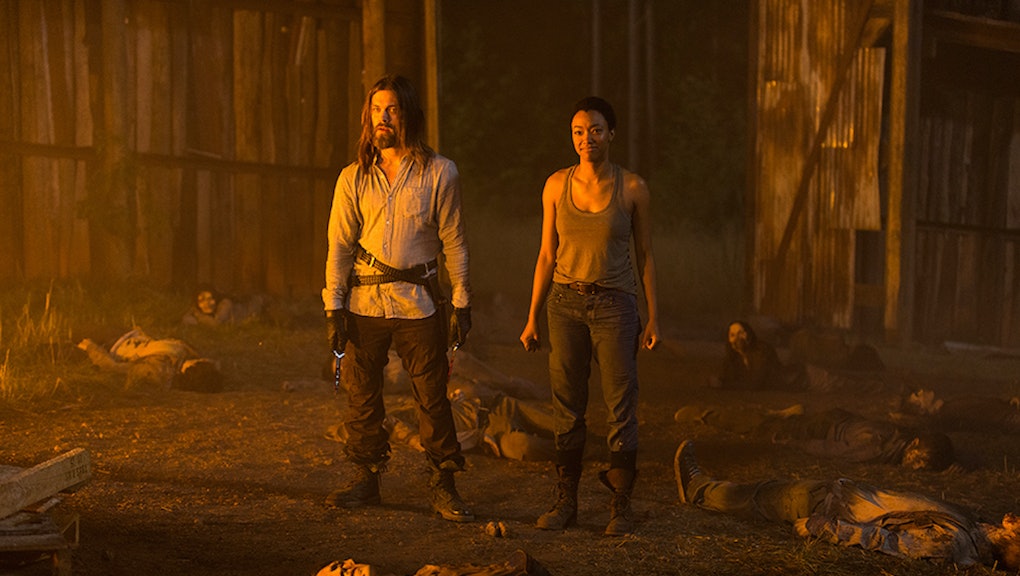 Jesus is gay on 'The Walking Dead.' Here’s why that matters.

The Walking Dead TV show doesn't always align with the comics, and that's generally good. For one, it allows AMC to have some independence in its storytelling. Without it, we would've never been introduced to characters like Daryl and Sasha.

However, the show made the right choice in keeping an aspect of its source material with the character (not Messiah) of Jesus. In The Walking Dead comics, he's gay. Fans get this confirmation in episode 14 of season seven, "The Other Side," when Jesus talks with Maggie at Hilltop. He confides to Maggie how close he's become with her and Sasha, which was hard for him having grown up in a group home and through his early days at Hilltop.

"This isn't like that, though," he tells her. "For the first time, I feel like I belong. Trying to make sure you and Sasha became a part of this made me a part of this. When I was first here, I was never here. I always found it hard getting close to anyone — neighbors, friends, boyfriends."

Jesus actor Tom Payne had previously voiced his approval for the character's canon sexuality back in November, during an interview with the Huffington Post. "I think that would be amazing," Payne said. "I know that [Walking Dead comic book creator Robert] Kirkman has said about the comic books that — yeah, who cares? He's a badass, and he happens to be gay."

While he isn't the first gay character to be featured on the AMC series, Jesus being gay is still a big deal for television in 2017. Progress has been made, but gay characters still account for a small percentage of total TV roles, according to the latest numbers from GLAAD's 2016 "Where We Are on TV" report.

Though it's become fashionable to trash The Walking Dead recently — and it deserves it for some awful storytelling, mind you — it's also worth remembering that the show quite recently fell into a troubling TV trope. The "bury your gays" trope became a hot topic last year after The 100 controversially killed off a character named Lexa, shortly after her relationship with another female character was consummated. While it didn't get nearly as much attention, The Walking Dead's sixth season did the exact same thing with Denise, a gruesome death that isn't even doled out to her in the comics. In other words, AMC explicitly chose to kill her off this way, and it wasn't long after she developed a relationship with Tara.

The Walking Dead has also struggled to portray its only current gay relationship between Alexandrians Aaron and Eric. While Aaron has been pretty well-developed since he was introduced in season five, Eric's barely appeared on-screen — and when he does, he exists to object to Aaron's decisions when helping the rest of the community, in favor of staying in their home and out of danger. This isn't just lazy writing and a poor conceit, it's an extremely unrealistic ask in a show set in the zombie apocalypse.

So Jesus, a capable lone wolf who's still alive in the comics, which bodes well for his long-term on-screen future, bucks the trend in more ways than one. The reveal itself is understated. He doesn't have to be beholden to any romantic relationships, and he sports the series' best dropkicks. The Walking Dead certainly has its problems — however, Jesus isn't among them.