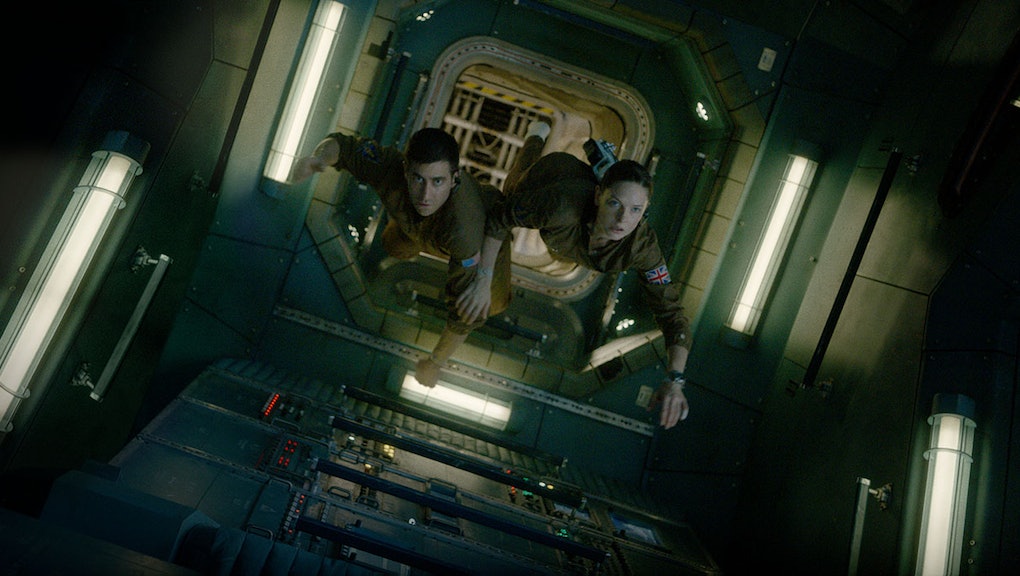 Who is ready for a Venom movie? If you're not, you better prepare yourself, because Sony has just announced that the Spider-Man villain will be webbing his way into theaters on Oct. 5, 2018.

It has been nearly a decade since Venom's first big-screen appearance in Spider-Man 3, the conclusion to Sam Raimi's blockbuster trilogy. Since then, a Venom movie has been at various stages of development. In 2013, a Venom film was announced along with a third Amazing Spider-Man film and the villain-centric Sinister Six.

Those plans seemed to die, though, following the lackluster response to The Amazing Spider-Man 2, leading Sony to partner with Marvel and incorporate Spider-Man into the Marvel Cinematic Universe — first in Captain America: Civil War, and again this summer in Spider-Man: Homecoming.

News that Sony was moving forward with Venom resurfaced in early 2016, but with no news since, the announcement of such a rapidly approaching release date seems to have come out of nowhere. As unexpected as this Venom news is, though, should we have been prepared for this film for quite some time? Could we have just missed the signs?

A theory is beginning to develop on the internet that essentially says we have been viewing trailers for a Venom prequel for months. For what film you ask? The Ryan Reynolds and Jake Gyllenhaal-starring Life, of course (also by Sony). This theory seemed to pick up the most steam when Reddit user toomuchsoull pointed out that the trailer for Life contains a shot that appears to be taken from footage of Spider-Man 3, a film in which Venom appeared as one of the main antagonists.

In the Reddit comments, Rubix89 asks the big question: "What if Life is actually a symbiote/Venom origin story?"

Who else just had their mind blown? Seriously, though, before we go too crazy, is it actually possible that the recently announced Venom could be related to Life? Sure. Is it likely? Probably not. But there certainly is enough there to at least ask the question.

If you have seen the trailers for Life, you know that it is a science-fiction space thriller in the same vein as Alien. The official synopsis for Life reads as follows:

Life is a terrifying sci-fi thriller about a team of scientists aboard the International Space Station whose mission of discovery turns to one of primal fear when they find a rapidly evolving life form that caused extinction on Mars, and now threatens the crew and all life on Earth.

On its own, there does not seem to be any connection to the Marvel symbiote, but add in the recycled shot, and the fact that Sony just announced a Venom movie a little over a week before Life is set to be released in theaters, and you can probably understand why fanboys are intrigued. Plus, it would turn what seems like an unoriginal space thriller into one of the most unique comic book origin stories ever.

For this theory to make any sense at all, Venom would have to be at least somewhat like the alien organism that wreaks havoc in Life. And he sort of is. In Marvel comics, Venom is an alien symbiote, part of a race known as the Klyntar. As a symbiote, Venom attaches himself to an organic host and takes control.

Venom's most prominent host is Eddie Brock, who was played by Topher Grace in Spider-Man 3. Venom has also bonded with Spider-Man and it was recently revealed that Deadpool was actually its first host. Subsequent Venom hosts have included Flash Thompson and Lee Price.

The Flash Thompson version of Venom has been known as Agent Venom, and even spent some time as a member of the Guardians of the Galaxy. But, we are getting a bit off track. The bottom line is that the alien in Life and the Venom symbiote do share some similarities, namely that they are both without bodies and appear to latch on to a human host.

The big difference, though, is that the Venom symbiote generally does not try to kill its host. Though we can't know for sure without seeing the movie, that does appear to be the goal of the life form in Life.

Is Life a Venom prequel?

I really wish I could answer this question. Realistically, it is highly unlikely that Life is at all related to Venom. Despite some similarities, it is probably not worth getting your hopes up. But if Life does turn out to be a secret prequel to Sony's recently announced Venom movie, it would be one of the craziest film surprises in recent memory.

As shocked as we may have been to learn of Split's connection to M. Night Shyamalan's earlier film Unbreakable, this would be so much bigger. If this theory turns out to be true, Sony would have not only succeeded in creating a prequel about one of Marvel's greatest villains, but successfully kept the whole world in the dark until one week before the movie's release. That is pretty incredible.

Life, also known as the possible, but unlikely, Venom prequel we now all hope it is, will be released in theaters on March 24.